How has the photographer made the subject stand out in this shot?

I came across the following photo today: 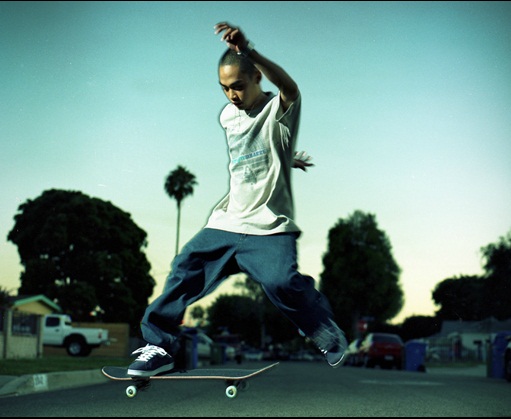 It's taken by Yoon Sul, a professional photographer. I marveled at the effect of the photo, but couldn't wrap my mind around how to take a photo quite like that. How would it be done, making the guy stand out? Or is this all a little photoshop magic?

reverse-engineering effect subject-isolation
Share
Improve this question
edited May 29 '12 at 4:26

The effect is due to combining flash and ambient light on a moving subject. The flash illuminates the subject which then moves. The subject blocks the ambient light creating a silhouette, and then moves before the flash fires so that the image lit by the flash is offset with the silhouette, giving the hard cartoon outline effect. No photoshop required for this one!

There's no particular post-processing going on here (other than some dodgy Instagram-style toning), he's just used an off-camera flash to 'freeze' the subject in mid-air. Looking at the full image on his website, which shows the shadows, it appears to be to the left of the camera and slightly above.

Not the answer you're looking for? Browse other questions tagged reverse-engineering effect subject-isolation or ask your own question.

47
How can I maximize the "blurry background, sharp subject" (bokeh) effect?
8
What settings do I need to take a night cityscape with blue sky like Eric Rolph?
1
How to achieve the photo effect of "Live Christmas Music at the Americana in Glendale, California" by Chris Yarzab?
1
Can someone shed some light on how the effect in this bar photo was done?
6
How was this high-gloss achieved when taking photos of skyscrapers?
1
Hard defined shadows with continuous bare bulb and flash?
2
How does wedding photographer post-process to achieve this rich detailed + high contrast portrait look?
32
How can I create this 'medieval look' using an entry-level camera like the Nikon D3300?
2
How to reproduce this shot of a person with reflections in front of them?