How do I use a 6x4 grid in the viewfinder?

The new Canon 5D Mark III allow you to activate a 6x4 grid in the viewfinder. Does anyone know the use of such a grid (instead of a more classic 3x3) for composition, besides obvious horizontal/vertical alignment?

Another thing to note: the Mark III allow you to use either 3x3 (with or without diagonals) or 6x4 grid when reviewing pictures, or when shooting through the LV screen, but only the 6x4 grid when using the VF...??? Maybe in a future firmware?

This was the real starting point for my question. Anyway, thanks to all fellows who took time to post answers!

I'm pretty sure the main purpose of the 6x4 grid is for general purpose horizontal and vertical alignment, especially for images symmetric about the horizontal or vertical centre.

While we're often told to get away from putting a major feature precisely in the centre of the frame (and the 3x3 or a golden ratio helps to guide this), there are many times where it's aesthetically or technically useful to put a point/line exactly in the middle of the frame. 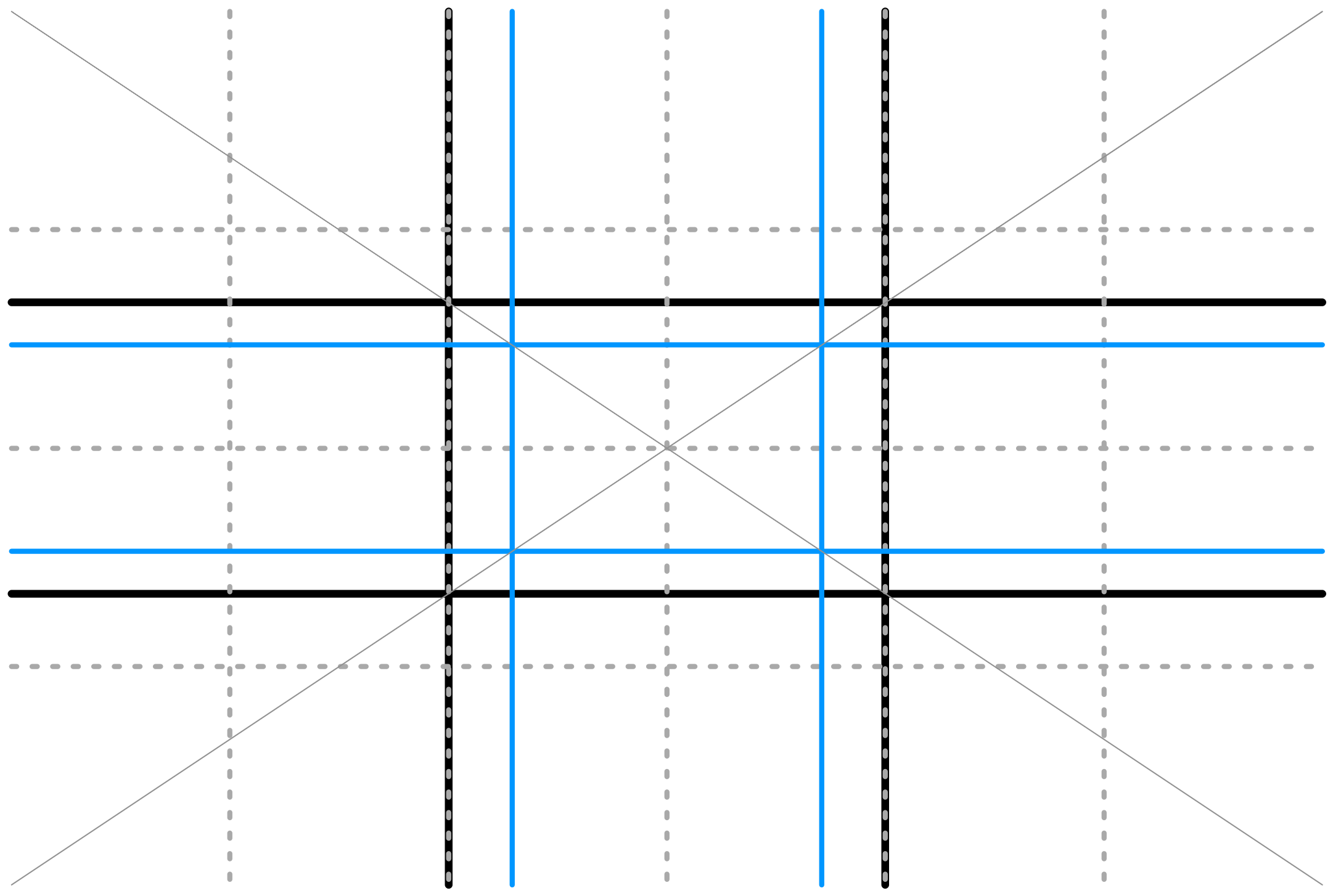 Black lines are 3x3 — Dashed grey lines are 6x4 — Blue lines are rule-of-thirds (not an option).
Diagonals shown also, but I believe they're only available in Live View.

The 6x4 set of lines marks both the centre-point and the vertical & horizontal mid-points of the frame, which the other line options do not. I suspect this is the reason for adding these lines in. You could kind of line things up with the old 5D AF sensor markings (9-point and 11-point AF systems have at least 3 points along the horizontal or vertical centre-lines for alignment), but there's no such obvious markings with the 61-point AF in the 5D Mark III.

Perhaps they could have just used the centre-lines, instead of 6x4, or added some less obvious markers on the edge/centre of the viewfinder, but it seems an obvious extension to make a reasonably regular grid for general purpose alignment. That and the fact that the 6x4 grid is square, which to me suggests alignment more than anything else.

I guess it could also be useful for making square crops (from the central 4x4 grid).

I was recently trying to take photos to use for screen/browser backgrounds - where the result needs to be very short and very wide. It turns out that there's not a very good way to scale pictures to that aspect (at least ones with real world objects in them that become unpleasant when overly stretched), so they need to be taken using a small part of the vertical canvas and then cropped. Having two different sets of guidelines on the viewer to choose from might make composition like this a bit easier. I don't have a camera with that feature to test it out.

Not the answer you're looking for? Browse other questions tagged composition grid canon-5d-mark-iii or ask your own question.

10
How does grid depth determine beam angle?
3
Why does the viewfinder of the Nikon D90 have a 4×4 grid instead of 3×3?
2
Changing grid-color of Cropping tool of Lightroom
1
Does it matter to put grid before or after sock/diffuser?
10
How to use the Fibonacci spiral to create better photos?
1
How to place photos in a grid
2
What is the Rule of Equiangular Spiral Grid?
0
5D Mk III Viewfinder Issue - How do I get a completely clean viewfinder and remove the dashed circle?