Can we measure size of an object using EXIF data from a photo?

Example: If I take a photo of a bird in flight with only sky as background, there would be no objects in the frame to give an idea of size of the bird. So if I could calculate the size to some approximate level, it would be really nice to know.

To find the spatial resolution (how large (wide or high) a pixel is in the subject) use:

Make sure the sensor size and focal length are using the same scale (both are in millimetres or inches).

Then you can count the number of pixels for the subject, and multiply that with the spatial resolution for one pixle.

I'm assuming a linear change in FOV over the whole area of the lens, which isn't 100% accurate, but quite close for normal and longer lenses.

the general answer is: Yes and No, if you add in enough information besides the EXIF info, then it can be done, if you don't add enough info in then no, it becomes an estimate, that info is an extremely complex calculation of the perspective of the object, but then also using that to work back to the format and angle of the photo frame, then an exact measurement to the person's eye or frame center (in elevation from the ground), then knowledge of the exact ground surface elevations between you and the object. and even more calculations beyond that.

An important step that the other answers are leaving out, is that you must use the data in the photo to find the perspective angles of horizontal and vertical lines on that object your photo is of, (which actually can be done, but is an extremely complex calculation), and even more complex if for instance in the OP's example of few objects in the photo to work with, however it still can be done, for instance in this case, if the object is not sitting "level" on the ground, then the height info is also needed. In the OP's example much of that info is probably left out/or unknown, so an answer can be No in that example case. But to be clear, the premise of the question is doable, if that extra info is known, and many times it is known, or estimates can be made of that info.

To sum up how (in general) this can be done: one needs an exact measurement of the ground surface elevation changes between you and the object, (there is more to it than just that one sentence).

then you need an exact dimension from ground to the center of your eye, or the center of the image frame that the camera is producing, this image frame can be calculated from the EXIF info, but the exact tilt of the image frame (camera) in relation to the object needs to be calculated from that perspective info mentioned before. And in the case of the OP's example, the height of the object off of the ground is needed (or the projection of that object back to the ground)

to show it can be done in a more general example photo, An app that does all this is below: (except it is using estimates for center of eye, and does a complex calculation of ground surface elevs, which also becomes an "estimate")

so since it is using estimates, you need to know one dimension of the object to correct the final output of the app. but that is far better than having to take a tape measure to everything on the object. To be clear, if the app had the exact dimension to the eye, or image frame center, and a profile of the ground surface changes, then it wouldn't even need that "one known dimension". so in that case, the answer to the OP question would be Yes.

the final output is a perspective corrected "elevation" of the object, and even with automatic dimensions. (notice this image has been perspective corrected so all verticals are vertical, horizontals are horizontal, and this is done automatically with no input from the user) This perspective corrected image is not needed for the calculation of size, but the perspective correcting info IS needed, that is used to find the angle, (yaw tilt, etc) of the image frame. (how the camera was sitting at the moment of the photo) this is what I want to emphasis is needed that the other comments have been leaving out. In the case of a "bird" as in the OP example, one is going to be pretty much left high and dry for this needed data, but in many situations it can be worked out. For instance this example below. 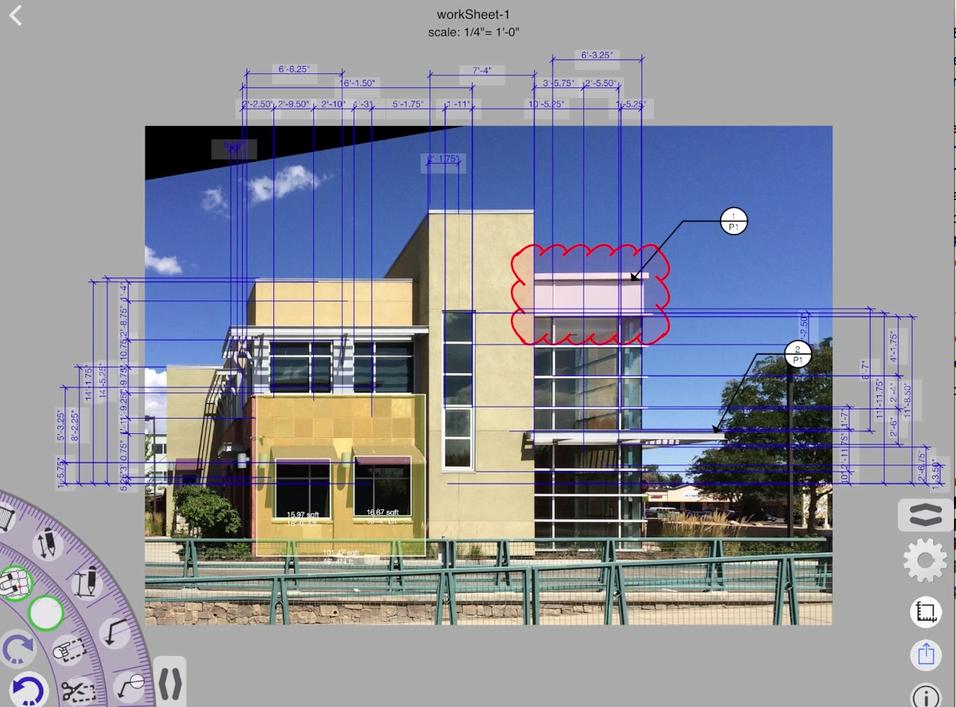 Not the answer you're looking for? Browse other questions tagged calculations or ask your own question.

5
How can the height of a subject in picture be calculated?
0
Estimate object size
43
How do I calculate the distance of an object in a photo?
4
What kind of lens is used in this picture of Earth?
3
Calculate object size when I have physical pixel size
2
Camera image in pixel to real image in meters size relation
3
How to automatically measure subject dimensions (width/height/distance) without physically measuring?
0
Calculation for getting dimension of object in image not working
2
How to calculate digital photo precision based on camera specification?
0
How to determine film size from smartphone image exif data?
See more linked questions

6
How can I calculate focal length from a photograph?
4
How to calculate the size of the image circle at infinity focus?
3
How to automatically measure subject dimensions (width/height/distance) without physically measuring?
3
Is the formula for object image size given focal length, etc. independent of sensor size?
2
Using a set formula to measure distance in a photo but the answers are coming out much smaller than expected?
2
I'm hoping to prove this distance to camera equation:
3
What is 'sensor height?'
1
Calculating the "35mm equivalent" circle of confusion/DoF