What is the major factor that makes colors in photos very vivid?

Once you have a good enough camera, what are the other major factors that makes some of the photo very vivid?

For example, looking at the following picture, the colors are vivid. If I take the same photo, probably the colors won't turn out this way. 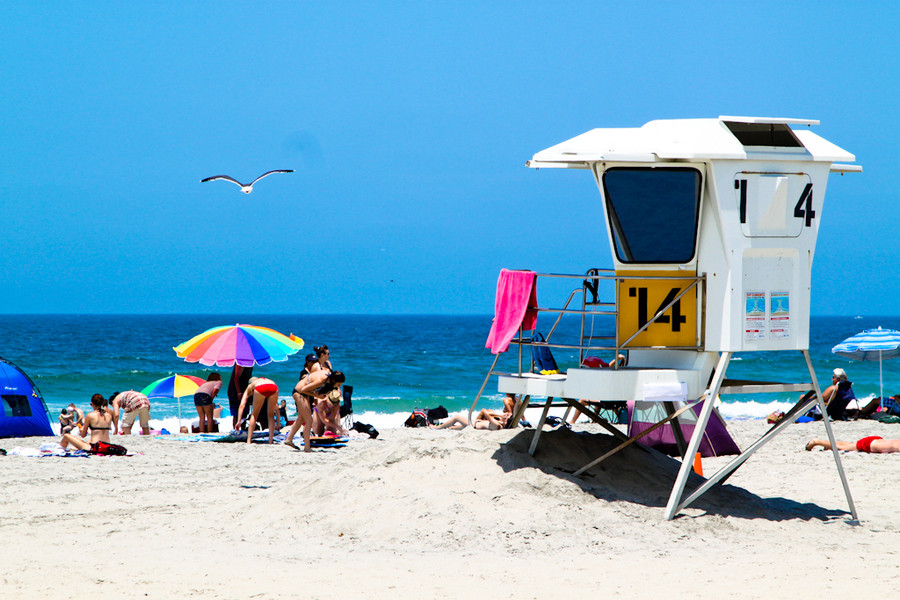 The type of lighting, the way the subject reflects light, presence of haze, the lens design and coatings and the dyes used in the sensor all have an influence on the vividness of colours in an image. But the major factor, which outweighs all of these by a significant margin, is how the image is processed.

Either in camera or on a PC the saturation settings matter far more than any of the factors listed above (although they all contribute to image quality in more subtle ways).

You can easily achieve results like the image you posted by boosting saturation in post. But remember just because you can, doesn't mean you should. Evaluate each image on its merits and try to decide whether you are enhancing the image, or trying to cover up deficiencies in other areas, such as composition or lighting.

There are (at least) two major reasons for this. The first is specular highlights. A specular highlight is where you basically have a direct reflection of the light source (in outdoor pictures, the sun) on the surface of an object in the picture. Pretty much by definition a specular highlight won't show any color -- a direct reflection of the sun will drastically overpower the filters in the sensor/film (and your eye) so unless you underexpose (quite a bit) it'll just show up as pure white. The more of these you get in your picture, the less intense the color will look.

The second is more about perception. In bright, directional light the ratio from highlights to shadows will be very high -- i.e., you tend to have very bright highlights, very dark shadows, and almost nothing in between. Under those circumstances, we mostly tend to notice the "bright" and "dark" themselves, and pay considerably less attention to the colors.

The picture above illustrates most of this reasonably well. Except for the white lifeguard stand, most of it is really quite low contrast. There's virtually no deep shadows at all, and the only thing close to bright highlights is the sand. Other than (again) the lifeguard stand, and probably a few of the waves, there's also almost no specular highlights.

John Shaw, for one example, points out that many of his "brightest" looking pictures were actually taken not only under cloudy skies, but when it was actually raining at least a little (though more than a little rain will reduce saturation at a distance very quickly).

Those can be controlled, of course. For many subjects, a polarizer can block a large part of specular reflections (especially useful for pictures with lots of vegetation). Water and (most) sand are quite reflective, which helps keep contrast more manageable for beach shots. Snow on the ground can do the same (even more so). Absent those, you can use reflectors to help fill shadows a bit -- at least for subjects that are reasonably nearby and small (it's not so easy to carry a reflector large enough to light, say, a mountain range).

Another crucial point is exposure. Overexposure can wash out colors badly. For maximum saturation, you may even want to underexpose a bit compared to the theoretically correct exposure. Here's an image with (simulated) overexposure: 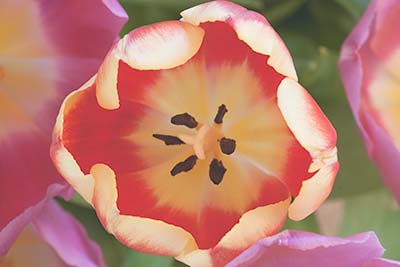 The same shot with no adjustment to saturation at all, but correct exposure looks much more saturated: 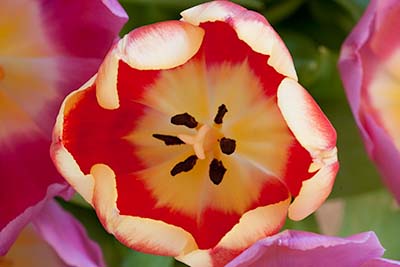 You can re-process the first to get close to the second by doing nothing more than adjusting the levels in Photoshop (or whatever).

Bright light makes more vivid colors, like bright sunlight, not cloudy or night time. More strong is saturation setting, like from -3 to +3... or maybe -5 to +5... it makes colors very dull(-5) or very exaggerated (+5). Sometimes you select Picture Style and one maybe is called 'Vivid' and it makes saturation very high. Usually problem is colors too vidid!

Objects lit by sun have usually much reacher colours than objects photographed on a cloudy day. However as was mentioned above, post processing plays an important role in achieving the vivid colours. In Photoshop you can use Vibrancy slider to add extra colour, in GIMP you can run your photo through a FX-Foundry Colour plug-in and then put it in Colour mode above the original image. FX-Foundry package can be found here - http://gimpfx-foundry.sourceforge.net/ (just sharing a link, have no profit from it).

The issue is exposure. Any camera can capture a scene, but most do that with the onboard reflected metering that integrates every scene and exposes the image to make that scene match a 18% gray value. That's usually a "safe" exposure under auto metering.

The problem here is that most scenes are not so simple. High key scenes would require slightly more exposure, and low key scenes slightly less if we let the camera choose.

Changing the type of meeter used to a reflection meter would resolve most of the issues you have between your images and the ones you like. Properly exposing an image, will provide enough dynamic range to keep detail in the highlights, and in the shadows. Having that extra dynamic range will make your images brighter and cleaner looking as well as allowing colors to appear more saturated, by removing the unneeded contamination that happens from underexposure or overexposure.

Also having the incorrect color balance can also contribute to colors that are not vivid. Example: a warm sunset scene shot at tungsten white balance. This would reduce the saturated warm colors in the resulting scene.

Not the answer you're looking for? Browse other questions tagged image-quality color brightness saturation or ask your own question.

3
How can I get nice, vivid colors in food photography without blown-out brightness from the flash?
1
Lack of sharpness / focus in low light
16
If I want to shoot darker shots, is it better to increase the lighting and then darken in post to retain clarity?
14
What turned the colors psychedelic?
7
Qualitywise, is there any downside to overexposing an image (within the dynamic range of the camera)?
2
What should I expect from Canon EF 24-70mm f/2.8L II USM?
3
What color makes the best background for plant photos?
3
Why does color hue change on different exposures?