How can they take pictures of the Milky Way?

I have had a trivial question for a long time. I can't understand how you can take a picture of outside of a thing, when you are a very small dot in it.

Really, how did they take these pictures of the Milky Way? Are they real pictures at all, or just some computations and imaginations?

In the mid-20th century, radio astronomy allowed us to see interstellar matter across the entire galaxy, in the form of the 21-cm spectral line (1.4 GHz) of neutral atomic hydrogen (HI). We could then see evidences for giant spiral arms, but distance determinations to the interstellar gas are very approximate, so we could just get a general idea of what it might look like, as viewed by an outside observer. Later, detailed observations of the 2.6-mm spectral line (115 GHz) of interstellar carbon monoxide (CO), mostly located in molecular hydrogen clouds, gave us a more detailed insight since molecular clouds define the spiral arms of our galaxy much more closely than do the more diffuse clouds of neutral hydrogen.

Since the emission of HI and CO is in the form of spectral lines, we can determine the radial velocity (speed towards or away from us) of each emitting cloud from using the Doppler effect. Using a model of galactic rotation, we can then make a map of the spiral arms over the entire galaxy.

But these were still very approximate because (1) each cloud has its own motions which cause a distance error when comparing observations with the model and (2) there are two possible distances corresponding to a given radial velocity for portions of the galaxy closer to the center that we are.

So we knew of large spiral arms and roughly where they were, but the detailed picture was still mostly imagination.

More recently, detailed observations in the infrared have allowed us to see deeply into regions of recent star formation all through the galaxy. These regions of recent star formation define the spiral arms much better than the observations of interstellar gas, but a lot of work involving comparison of both infrared, radio, and microwave observations is needed to come up with a good general picture. See A Map of the Milky Way for a good view of our current understanding of what the Milky Way galaxy might look like as viewed from outside.

Our pictures of the Milky Way Galaxy are mainly based on maps of our galaxy's spiral arms obtained from radio astronomy, from the 21-cm line of neutral hydrogen. This was first done over 50 years ago, and has been refined over time. In addition, the pictures are enhanced through our knowledge of the many other spiral galaxies we observe around us.

They are to some extend 'artist interpretations', but also to some extend true representations. We can observe the galaxy from within, and based on the data we can observe we can construct a representation of the same data as seen from outside -- just in the same way as you can sit in your car and observe the traffic jam in front of you, and you can with that observation make a very good picture in your mind of what it would look like from a helicopter.

They're just imaginations based on estimates taken from star density (to determine we're in a barred spiral galaxy) and observations of what other similar galaxies look like. There's no way we could get a probe far enough out to take a picture of the entire galaxy.

Just to point out something obvious that the other answers haven't mentioned: you can take pictures of the Milky Way from inside it. In fact, it's a lot easier than taking pictures of other galaxies — to get started, all you need is a decent camera, an equatorial tracking mount (technically optional, but highly recommended) and a dark night.

Here's a particularly nice one, courtesy of the ESO: 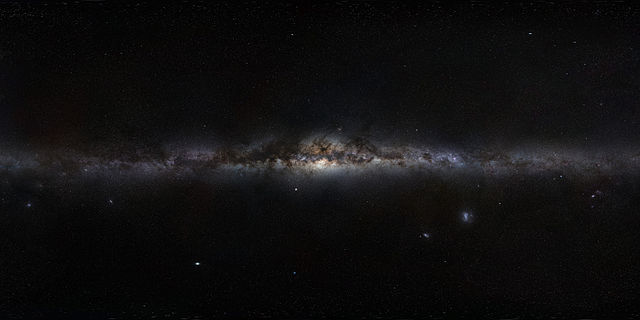 (Image by ESO / S. Brunier, via Wikimedia Commons; used under the CC-By 3.0 license)

They just don't look very much like the pictures of other galaxies that we see from the outside, although, with a bit of imagination, you can detect a certain resemblance.

15
Does long exposure cause hot pixels in photos?
34
How do I capture the milky way?
14
Capturing the Milky Way: what did I do wrong?
1
is it possible to take photographs of the Milky Way with a Panasonic FZ-30 camera?
2
Merging pictures of the Sun at the same location
2
How do star trackers work to take a photo for 5 minutes without blur, and are they worth it?
3
How to get the Milky Way bright enough without overexposing foreground objects?
5
How to take astrophotographs with terrestrial objects in frame
0
How to set exposure for photographing the milky way?