Which Lensbaby Sweet 35 or Edge 80 effects are harder to reproduce post-processing?

I want some suggestions from Lensbaby users.

I have the plastic optic, double glass and fisheye optic. I use the composer.

The recent new optics: Sweet 35 and Edge 80 seem very intriguing and I want to buy one of them, but not sure which one to get. I know they have the in-built aperture which will be a lot more convenient, but will the Sweet 35 be very similar to the double glass other than the fact it's now wider? I've heard the blur is not as smooth as the blur in double glass. (updated: here is the link about the highlighted blurs: here)

Also if I could shoot on a normal SLR lens and work on post-processing, is it easier to create the effect of the Edge 80 or the Sweet 35? The Edge 80 is just tilt-shift focus with a line-focus thru the photo, am I right? If that's the case, should I be getting the Sweet 35 instead because the effect can't be reproduced? But I have the double glass already; would it be an overlap? I don't have a Canon tilt shift lens, so maybe the Edge 80 is a better choice?

Sorry for being so long winded. I really have no idea which lens I should get.

The effect of the Edge 80 can be approximated in software, but using a tilt lens is generally considered to be both easier and better in terms of actual results. (Real lens blur is hard to fake without a 3D model.)

Whether the Sweet 35 would be too much overlap with the standard double-glass optic depends on how into all this you are. In "mundane" non-LensBaby photography, a 35mm lens and a 50mm lens usually are happy side by side — they're part of a "standard" set of prime lenses, not competitors. On an APS-C camera, the original LensBaby lenses are in the focal length range normally used for portraiture, while the Sweet 35 is a "normal" focal length. I think the less-attractive blur is not because of worse design, but simply a matter of what you get with this construction and a wider angle. Not necessarily bad, but just what it is.

So, between the two, I think the key questions are:

Of course, since this is an apples-to-oranges comparison, the answer very well may be yes to both. In that case, I say go with whichever is speaking to you more now, and get the other when a space in the budget opens up again.

Here's an example of an image with the Edge 80: 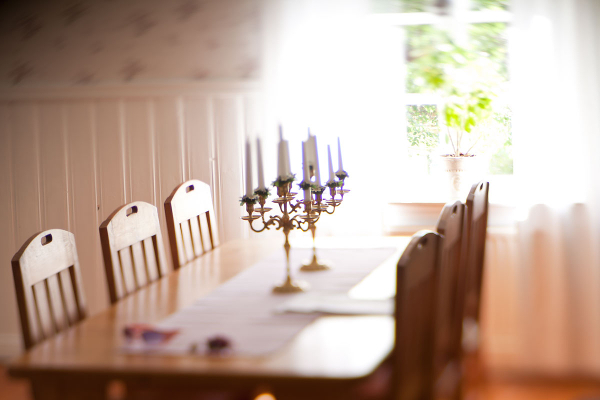 Matbord, by Guffa (CC-BY-SA, as seen in the weekly photo contest)

You could try this with a software filter, but honestly I'm not sure where you'd even begin. The blur along the bottom edge and top-left corner could be approximated pretty easily, but the bloom around the window, the plant on the sill, and the candles.... I think it'd basically have to be painted by hand.

Not the answer you're looking for? Browse other questions tagged lens post-processing blur bokeh lensbaby or ask your own question.

40
How to get a miniature effect on pictures without special equipment?
15
What is a normal lens?

10
How well do tilt-shift lenses work for nature/landscape photograhy?
21
How can slightly blurred photos be improved in post processing?
9
How to avoid a halo around the edges?
10
Is the bokeh in this picture naturally occurring, or added in post-processing?
1
What are some artistic techniques that can be performed with lenses?
6
Why are there no autofocus tilt-shift lenses? or, why do tilt-shift movements appear to be incompatible with phase-detection autofocus?
3
How can I mitigate edge halo when darkening skies in post-processing?
3
Do you get more bokeh on a APSC sensor with a full frame 50mm f/1.8 lens or a APSC 30mm f/1.4?