How does the D800E reverse the effect of an antialiasing filter by adding another filter?

According to http://mansurovs.com/nikon-d800-vs-d800e the D800E differs from the D800 in that one of the layers of the filter reverses the effect of the initial low-pass filter. How does this work?

Is the second filter the same as the first, but mounted in a different orientation? Are they identical birefringent crystals? On how many axes must the second filter be aligned with the first? What will I see in the resulting images if there is a misalignment?

A traditional AA filter consists of two parts, one splits the image horizontally with a ~1 pixel offset (effectively giving one image superimposed on itself with a very small horizontal offset). Behind this is a second filter that does the same vertically. The effect of this is to split each light ray four ways so some of it lands on each of the four RGGB pixels in the Bayer array.

The D800e has the first horizontal split filter but immediately behind it a second horizontal filter which combines the two images to undo the effect of the first filter. The filter material has two refractive indices for different polarizations so each incoming ray (which will contain photons with different polarization) is split into two. If the second filter has equal and opposite refractive indices, the diverged light rays are bent the other way so the they land on top of each other again, cancelling the effect of the first filter. The key point here is that the each of the superimposed images have different polarizations, allowing them to be recombined. If this weren't the case adding a second filter would produce three images not one!

As for why they do this instead of just not installing a filter, rfusca hit the nail on the head, it's much easier (and therefore cheaper) to occasionally swap a batch of vertical filters for horizontal filters when you want to build d800es than it is to disable the filter mounting part of the production line and pass the cameras through to a different AF calibration stage.

In addition to this, modern lenses are designed to correct for the refractive properties of the filter stack. Omitting the AA filter would introduce a subtle aberration into all images shot with digital era glass.

The answer is in the quoted article.

"We know that the full low-pass filter cannot be completely removed, because it would cause the focal plane to move; plus, the camera still needs to be able to reflect infrared light rays."

Manufacturing concerns, as pointed out by rfusca probably have some contribution, but you still need to have the 3 filters in place for the reasons in the article.

I've run a camera with the infrared filter removed (for astrophotography). I was told that the auto focus would no longer work, but for me it did. 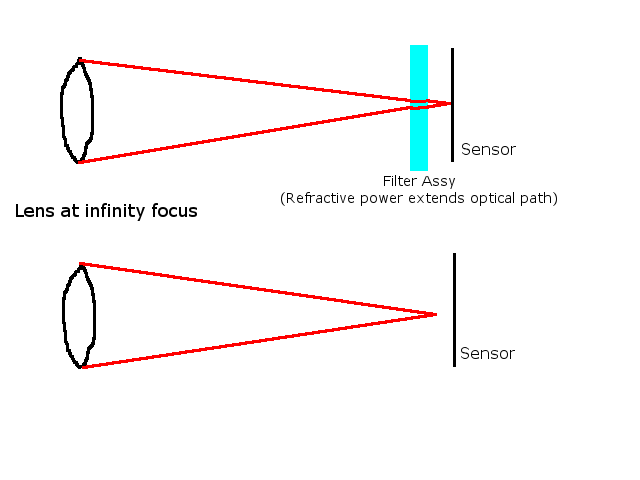 13
Why is a physical anti-aliasing filter still needed on modern DSLRs?

18
What effect does a UV filter provide?
7
How does the new layout used in Fujifilm X-Pro1 sensor improve image quality?
5
How does an anti-alias filter affect image quality other than reducing Moire?
4
Does Stopping down affect the performance of the sensor's AA filter?
14
How does an apodization filter improve bokeh?
5
How can I calculate the effect of a supplementary close-up lens (a.k.a macro filter)?
3
Why does the "fisheye effect" look stronger or weaker with different scenes taken with the same lens?
3
What effect does the body have on the character and quality of images?
2
Can the antialiasing filter be removed to get sharper images?
0
Does adding a lens with a higher MTF50 in front of a lens with a lower MTF50 increase the MTF50 of the entire system?