Adding to to the answer above it has to be mentioned that a zoom lens benefits significantly from the Image stabilizer. I own the IS lens and can tell you that the effect is very strong, specially if you use a 1.4 or higher extension on the lens.

The price difference is given by the fact that the non-IS lens you listed here is much older (its the first, not the II model) AND lacks the image stabilizer. You should read reviews of all 4 lenses (IS vs. non-IS, I vs II) To see how big the quality difference is and if it matters to you. If you look for example at the lens flare comparison, the older lenses perform MUCH worse than the new ones, similar for contrast.

In general, I can only recommend to never save on a lens, specially the L lenses since they last for a very long time and are more important than having a good camera in my opinion. You will change bodies over the years more often than throwing out a lens and getting the successor model.

To start with IS and II are two different things. The II indicate that this is the second-generation 70-200/2.8 IS.

IS means "image stabilizer", i.e. a system that reduces hand-shake. This system will allow you to take sharp pictures with a lot longer shutter speed. However, it doesn't do you any good if the subject moves...

If you need it? There is no way to tell.

An alternative would be a used 70-200/2.8 IS, i.e. the first generation. This is cheaper than the II version, but most users would not notice any difference in image quality.

Also, if you think that the ISfeature is more important than aperture, you could also consider the 70-200/4 IS. This lens is way lighter and smaller yet delivers great pictures.

"The one that isn't IS II" was introduced in 1995 when expectations for a high priced telephoto zoom lens were based on the performance of film and how images taken using film were generally used. Film is generally less demanding than digital:

As digital imaging overtook film and became the overwhelming "de facto" medium used to record most photos, the market demanded better lenses than the best that were available in the film era. The advent of supercomputers has aided the design process of new lenses as computer models can test changes in design in a matter of hours what once took weeks or months to test via physical prototypes. The newer lenses are often much sharper than most of their film era counterparts. 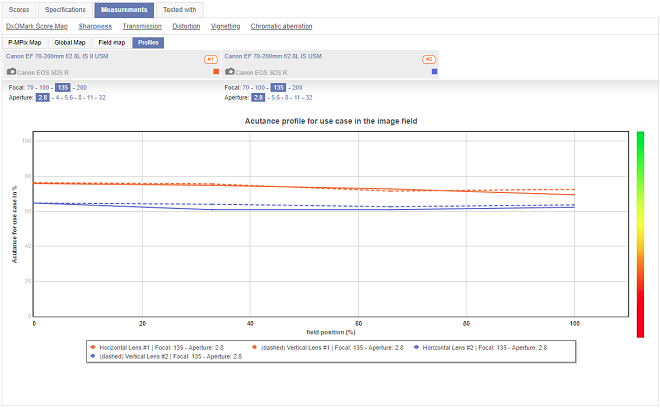 At 70mm and f/2.8, the difference is much less, but it remains fairly constant all the way from the center of the frame to the edge and corners. 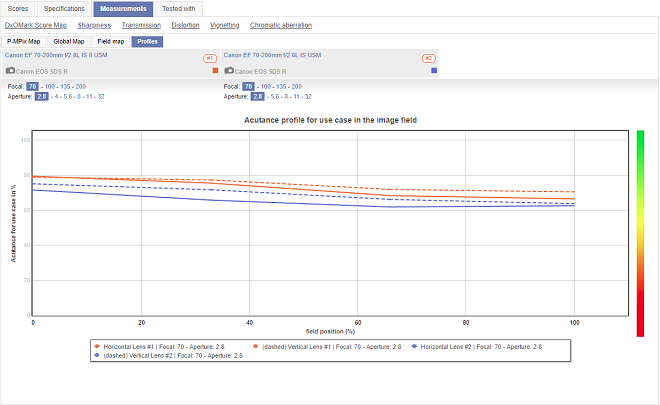 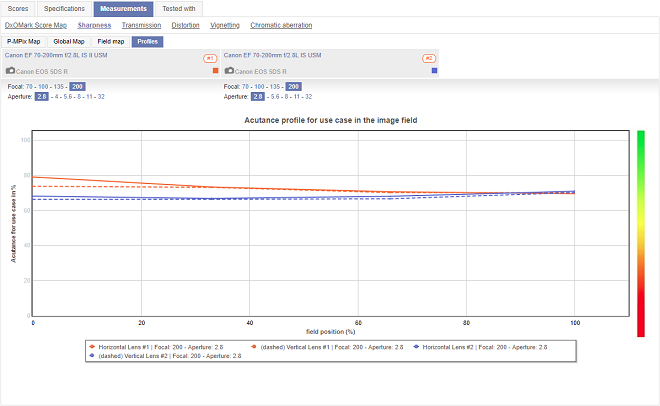 Whether IS will be helpful, or even critically required for you depends on how you plan to use the lens. IS helps decrease the influence of camera movement when using longer shutter times (a/k/a "slower shutter speeds"). Is does nothing to reduce the influence of subject movement while the shutter is open. If you are shooting sports or action and using proper camera handling technique, you'll probably need to use shutter times short enough that there will be very little benefit from IS. If, on the other hand, you are shooting static scenes in very low light without a tripod, IS will be invaluable.

Beyond acuttance and IS, there are other considerations: flare resistance, geometric distortion, peripheral light falloff, etc. In general, lenses designed in the digital era have better lens coatings on more of the lens elements and are more resistant to flare. This was required due to the higher reflectivity of the front of digital sensors and the filter stacks directly in front of them when compared to the reflectivity of film. For the same lens class (i.e 70-200mm f/2.8 lenses), the newer ones tend to demonstrate less geometric distortion and light falloff in the corners, although improvements in these areas tend to be more marginal.

Not the answer you're looking for? Browse other questions tagged lens canon zoom or ask your own question.