What is a pancake lens?

I've read about a "pancake lens" but don't really understand what that means.

What the pros and cons of having a pancake vs. another type of lens?

I'm thinking of getting a Panasonic Lumix DMC-GF1 which comes with such a lens.

A pancake lens is designed to be physically very thin and compact, being relatively pocketable when combined with a slim body.

Current pancake lenses have a fixed focal length in the middle of the spectrum (neither wide nor telephoto), and they are relatively slow for a prime lens (often f/2.8) although exceptions exist. The image from a pancake lens looks the same as an image from a bulkier lens of the same focal length; they have no special effect.

Although the pancake design is quite old, it has been popularized lately by mirrorless systems. Currently produced pancake lenses include:

Here is an example of a pancake lens: 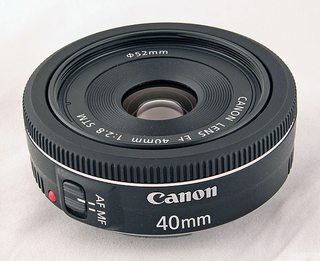 "Pancake lens" is a purely physical description.
If the lens is significantly wider than it is long, it's a pancake lens.

Actual overall size has nothing to do with it, and it has no implications about image performance, aside from the fact that it's generally very hard to pack a telephoto or fast prime into the pancake form-factor.

It's worth noting that a "Pancake lens" does not have to be small or compact, and a small lens is not automatically a pancake lens. It's only a description of the lens form-factor.

Not the answer you're looking for? Browse other questions tagged lens terminology lens-design or ask your own question.

52
Why is the 50mm prime lens the most standard?
14
What does the magnification ratio number mean on a macro lens?
5
How to shop for a lens filter?
7
Are there any good pancake lenses for Canon EOS DSLRs?
1
Is the Panasonic Lumix 14-42mm or 20mm pancake better for night shots?
4
What type of lens is best suited for adventure photography?
1
What kind of results can i expect with a Canon EOS 500D with Tamron 90mm Macro?
0
Which Canon lens to get, EF 24mm f/1.4L II or EF 50mm f/1.2L