What about lens construction influences bokeh?

I can understand how certain elements of a lens can correct an aberrations or make it sharper - but specifically, how do lens manufacturers influence the bokeh - the quality of the blur? There's a huge difference between the bokeh of say a 85mm f/1.4 and the standard 18-55mm kit lens.

As has already been pointed out, out of focus highlights will (mostly) reflect the shape of the aperture. That may be the most obvious element of bokeh.

There is quite a bit more to bokeh than just that though. Spherical aberration correction is another important element. If a lens corrects spherical aberration perfectly, an out of focus highlight will simply increase in size compared to one that's perfectly focused, but the light will be distributed perfectly evenly throughout that disc. In reality, however, that isn't how all lenses work, and (in particular) it doesn't lead to what many think of as the nicest bokeh.

In reality, the illumination across that disc is often at least somewhat uneven. What most think of as pleasant bokeh results when the center of the disc is bright, and the brightness falls off toward the edges of the disc.

The opposite is also possible though: most of the light falls toward the edges of the disc, and the center is relatively dark. In severe cases, this leads to "double line" bokeh -- the center part of a disc is enough darker than the edges that the center seems to disappear, and what was one object looks almost like two instead. Even in less extreme cases, this tends to lead to a "nervous" looking bokeh where features and textures tend to stand out rather than blending together nicely.

The third possibility is that even though the same overall brightness is maintained across the disc, it's not the same color throughout. One typical manifestation of this is discs that appear to have a green outline around the outside.

One more point to bear in mind is that exactly the same lens will often exhibit more than one of these. In fact, nearly all lenses exhibit all three, to some degree or other. The first two (bright center vs. bright edges) will depend on the position of the out of focus highlight relative to the focus point. If the background shows bright edges, then the foreground will typically show bright centers (and vice versa). Nearly all show at least some minimal degree of color change across the disc, though it's certainly much more visible in some cases than others.

The biggest factor will be the number, and shape, of aperture blades. More blades, with smoother edges and transition means the opening is more round, and hence creates the smooth and rounded bokeh that people find desirable. An aperture with less blades tends to be more angular in shape and creates a more angular bokeh, which people like less. Typically, lenses with lots of aperture blades are the more professional ones, hence the reason that professional lenses tend to have better bokeh.

Mirror lenses, which have a fixed apeture, have a different effect. Because of the nature of the lens, with the center mirror assembly, the bokeh, while round, looks like a donut and people tend not to like the look. I don't think it's that bad, but to each their own.

The fact that the aperture drives this is how you can shape bokeh as well. Creating your own shaped aperture allows you to actually shape the out of focus highlights to something else, like so: 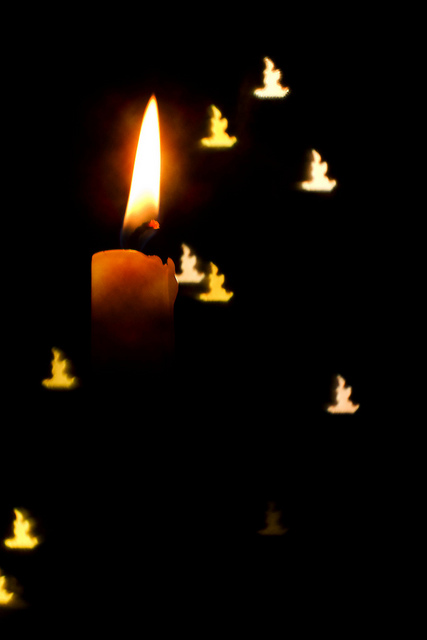 I have a larger version on Flickr. It was basicaly done using a black paper with a candle cutout fitted over a 50mm lens that was set wide open, creating my aperture for the shot of a candle with Christmas lights behind.

The aperture is the most significant factor as its shape is the strokes of the paintbrush that paints the picture, so to speak. I have seen lenses ranging from 5 to 15 blades and they can be rounded (good) or straight (bad). And in the old days they could be misaligned giving the signature takumar shuriken shape. Wide open you won't see this, but often you do need to stop down a bit to ensure that the face in a portrait, or insect in your macro shot is fully in focus.

Here you can see the different between 6 blades and 15 blades: 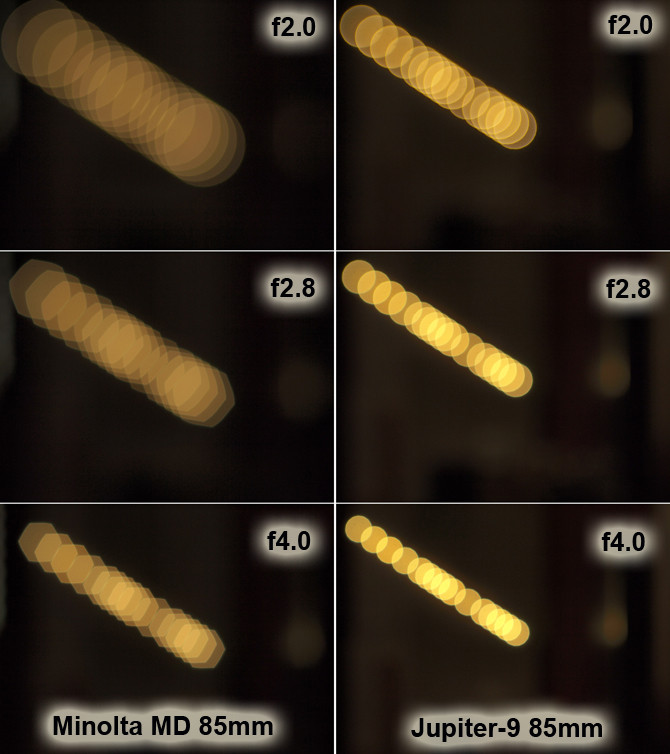 The Pentax SMC lenses are renowned for their shuriken like aperture caused by misalignment of the blades when stopping down until F/4. 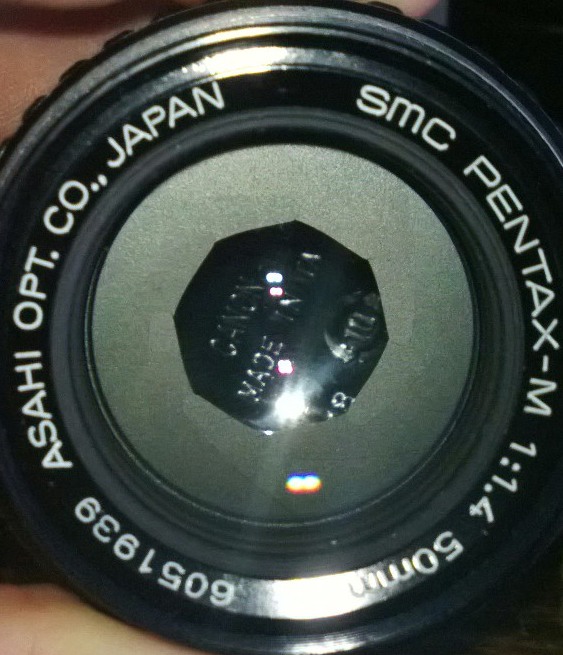 left: stopped down - here you see some "teeth" on the highlights

right: wide open - here you notice spherical aberration on top of the highlights. 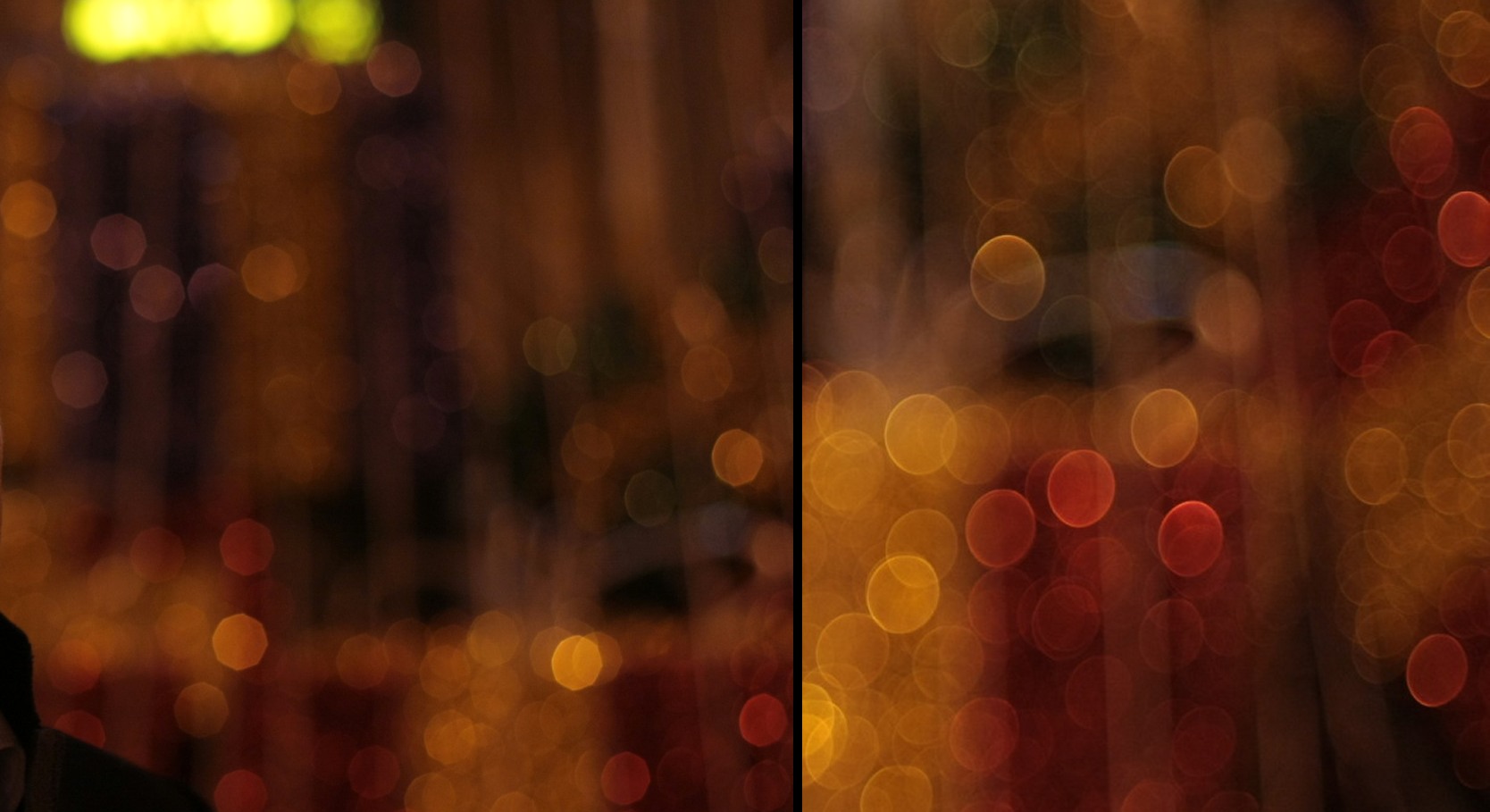 The 2nd factor how your background will be rendered is how well the "brush strokes" blend together. The examples above show that some renditions are kinda strong in the edges which despite being very round, can actually produce a "busy" bokeh. This is controlled by the lens' handling of spherical aberration and it may be different for the areas in front of and behind of the focus plane. For example, the Jupiter is known for amazing background bokeh but terrible foreground bokeh, making it best for portraits, where the person is the closest point, while not so good for macro where you might have the focus on the midrange with blurry things closer and further away. When lens manufacturers like to brag about using aspherical glass, they are trying to say they are good at controlling spherical aberrations.

Spherical effects in focus, in front and behind focus

I can't give a specific answer since the actual quality of the bokeh probably depends on the specific optical formula of each lens, but there are a few aspects that I can comment on.

The Amount of bokeh is largely dependent on the size of the aperture, which influences depth of field. However a few other factors are involved. For instance the larger the image plane (sensor), the shallower the depth of field (more bokeh). Also getting closer to your subject, and thereby minimizing the practical depth of field can greatly enhance bokeh.

Finally, the actual optics of a lens will determine the quality of the bokeh. This can range from smooth and buttery to nervous and busy. Higher quality lenses tend to go smooth and buttery, which is considered the ideal, but there are plenty of exceptions.

*Note, if you have a lens with nervous bokeh you can still achieve smooth results by avoiding high contrast situations

I think that at least a part of the difference has to do with the number and shape of aperture blades.

For example, the Canon 50mm f1.8 although a good performer has a horrible, noisy bokeh mainly due to the the fact it only has 5 non-rounded enrapture blades. The Canon 50mm f1.4 has 8 aperture blades and the bokeh comes out a lot smoother.

Now I have never worked with the Canon 50mm f1.2 but I have seen the bokeh comparison with the 2 other lenses mentined above and it is very smooth. This lens also has 8 blades but they are rounded so the shape of the blade also has impact on the quality of the bokeh.

There are bokeh comparisons for these 3 prime lenses mentioned above under the respective links.

Not the answer you're looking for? Browse other questions tagged lens lens-design bokeh or ask your own question.

0
Does number of elements and groups of lens affect bokeh shape?
61
Is there development in the world of lenses?
18
Do rounded edges on aperture blades improve image sharpness, and how?
6
What are the types of aperture blades?
3
Do the out of focus elements in this photo look normal?
4
How is a lens's bokeh determined by its construction?

83
How much do lens lineups vary across DSLR platforms?
7
What size hole do I use to make differently shaped bokeh?
44
What does the number of elements and groups in a lens mean?
2
Tamron 17-50 f2.8 lens vs Canon 17-40mm 4.0 lens
11
What are the constructional differences between a macro and a regular lens?
3
How do the Samyang and Nikon 85mm portrait lenses compare?
29
How do you achieve sharp bokeh circles?
2
Canon EF 16-35 f/2.8 prime vs. 50mm f/1.2 lens for bokeh/dreamy effect?
1
Why does image quality vary across lenses, and what to look for when comparing?