How to make a landscape photo like Stanislav Perov?

I am a beginner in photography. Could some one explain how to make this photo?

There are some things that I would like to know: 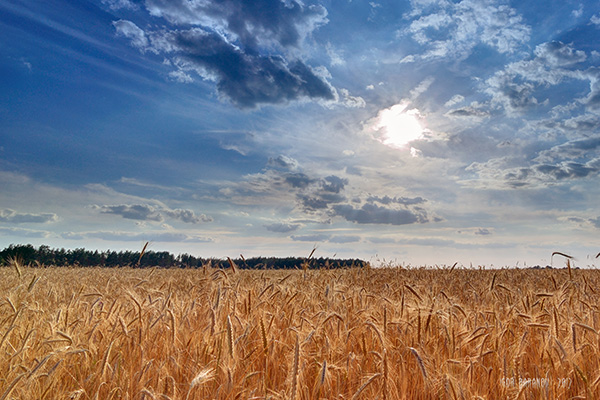 The differences in camera formats won't show up in an image that size on the web. If you want to print large then you need to be careful about lens selection and use the largest format available to you.

That image is almost certainly multiple exposures tonemapped / enfused into a single picture, I.e it is what's called an HDR image. No amount of graduated filters is going to let you expose for some backlit corn and not totally blow out he sun / sky. A polarizer might help but is by no means required.

Aside from the processing there are no magic camera settings for this or any other image, just what's required for the scene. A fairly wide lens was used, with the aperture stopped down to increase depth of field. As the foreground is really close to the camera focusing could be critical, however if I were shooting multiple exposures I would just focus stack at the same time.

Finally shooting into the sun with a wide lens won't damage your camera, just be careful of your eyes!

It's positively an HDR image but there might be more going on than just that. If I was to photograph the sun using multiple exposures HDR I would expect to see very pronounced rays similar to this image. (how many rays depends on the lens) This leads me to believe that there is some very careful framing and timing going on here. I think the sun is behind a cloud which lessens the intensity of the sun itself in the small area where Stanislav is shooting. Having the sun obscured by the cloud might not have been enough though. I've recently experimented with multiple exposure HDR while shooting with a Neutral Density filter. This pretty well completely blew out my sun and although I liked the shot I could not recover the blown out area. The blown out area did however look similar (gradual transition from clouds to complete white) to what I see on Stanislav's photo but it was white. I think he added yellow graduated colour on the sun and surrounding area. (NIK filters are great at adding control points to photos and allowing for controlling any color and exposure property of any part of a photo) You can do that even in the NIK HDR Effex software; process your HDR and adjust various areas of the photo differently. There is also no flare no light spots in the photo that ND filters would produce when shooting against the sun so either Stanislav really new his stuff and either shielded careful when shooting or removed imperfections in post processing.

You can see that he used a filter on this shot where you can see the circular light anomaly at the bottom - this is what I would expect when I were to use an ND filter in a similar situation.

Many photographers consider large blown out areas a problem in a photo and others don't shy away from it when it "works". Here is another photo where that suggests that Stanislav belongs the the latter group.

I like the appearance of the light on the crops. It could be natural and just a result of the HDR processing but there could also be some additional post-processing here. I already mentioned NIK; they also have a software dedicated to controlling light in a photo. Photomatix, another popular HDR software has some scene lighting options already built in which sometimes work quite well in these particular situations (open spaces). I use both HDR Effex Pro and Photomatix and each package yields a look with a different feel. This image has the feel of something I would expect from Photomatx.

As for the lens; it's very wide. Judging by the distortion of the clouds it could also be a fisheye lens. I don't personally own a fisheye (will be my next purchase) but it is said that if you level the horizon in the middle the distortion effect on a landscape is less pronounced. You can find very wide angle shoots done with say the Rokinnon 8mm on the web that look almost as if they were taken with an extremely wide angle lens. Judging by this shot, Stanislav has one in his arsenal.

Not the answer you're looking for? Browse other questions tagged filters hdr landscape shooting-technique reverse-engineering or ask your own question.

2
What equipment should I purchase for a trip to Mongolia?
4
Plan to a landscape shot
9
What caused dark areas around bright light in this cityscape shot?
10
Why am I having trouble getting sharp results with my new DSLR, compared to a point and shoot?
28
How do I capture the moon and its surrounding context?
6
How can I make a picture like this one of a bridge in green landscape seem less plain?
2
What are different composition techniques for landscape photography?
1
How to increase the dynamic range for a landscape photo without post-processing?
3
What adjustments can make this landscape look better?