What is the lowest level of luminous flux a camera can detect?

In the past, I've asked about taking photos of luciferase. Now I'm curious how weak of a light source I can detect. From How many photons per second is one Lumen? on Physics Stack Exchange, I can determine how many photons/sec makes one lumen. What then is the minimum amount of lumens needed for a camera to detect?

Short: About 5 picolumen per pixel with the best commercial DSLRs such as a Nikon D3s.

Minimum detectable light source will depend on camera and how much of the image area the source occupies. For best detectability, a source will be "brightest" if all it's energy arrives in a one pixel area. The image will not be very interesting in most cases :-).

But, to attempt to put a very approximate empirical answer to the question:

I'll make various assumptions along the way and summarize them at the end so they can be adjusted as desired.

1 EV is a bit above bright Moonlight and is correctly exposed at ISO 100 at f1 for 1 second.

I'll avoid the temptation here to leap into steradians and candela and stick with more intuitive empirical terms :-).

Let's assume you are using a Nikon D3s which has a 12 megapixel sensor that can just about see in the dark with no photons at all.
At about 100,000 ISO and an exposure of one second at f1 at 1 EV and dark field subtraction you may perhaps have difficulty detecting whether a given pixel was illuminated or not as even a D3s is getting somewhat noisy. At around 12800 ISO there would be little doubt.

If you set your camera to image 1 square meter then then the 1 EV lighting will be providing 1 lumen total so the 12 million pixel sensor will be accepting ~1/12,000,000 th of a lumen per pixel.

Then you can DETECT about 5 picolumen **in a single pixel area.
A Nikon D3S should do thus with relative ease.
Longer exposure times will produce increased sensitivities but in time noise will catch up with even a D3s.

Over the whole 12 megapixel sensor his corresponds to 78 microlumen which is 1/12800 th of a lumen total which is no surprise as it is just the inverse of the ISO setting when imaging a square meter at 1 lumen per square meter.

If you vary imaged area, aperture, ISO, sensor pixels, exposure time or camera capability then the answer will vary accordingly.

The biggest gain you can make with a given sensor is to cryo cool it.
And then there are advanced photo multiplying sensors that take the question away from the realm of "normal photography". eg Electron Multiplying CCD, Frame Transfer CCD, Intensified CCD, ...

It's been suggested that some cameras are superior to the D3s in light detection ability per pixel. For cameras which are actually available to take real photos wih, The D3s is still the king of low ISO. See DxOMark's evaluations here.
They explain their reasoning and method on the above site. 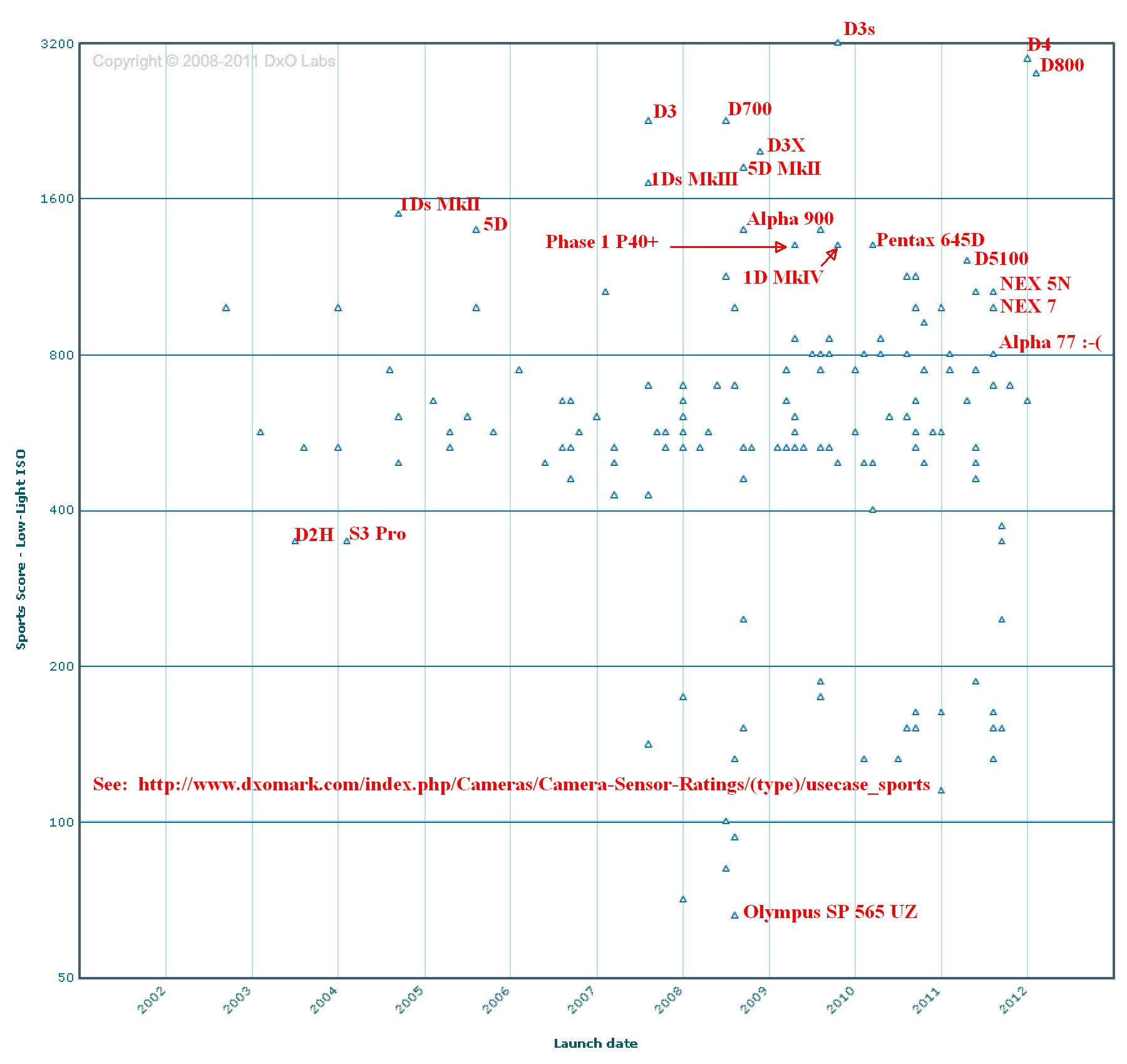 For those who have the time and patience to wade through a long thread, this DPReview user discussion discusses sensor dynamic range and MUCH more related material. There are several quite capable and high powered people there banging heads together rather solidly but they largely seem to come to a good degree of agreement overall.

Max dynamic range of a sensor is one of their easy topics. It is generally agreed that gains due partially due to dithering allow up to +1.8dB more dynamic range than ADC bits.

Note that you can get more again IF the sensor is better than the resolution of the ADC used BUT if the ADC is either more precise than its number of bits ie LSb = 1.0 or 1.00 and not just 1. in actual accuracy OR if the ADC is stable in its results, regardless of actual accuracy. In such cases the addition of controlled noise of designed characteristics can allow more bits to be extracted from the ADC than it notionally possesses.

See figure 12, page 5, where the addition of optimum dither noise allows recovery of a 1/4 LSB amplitude signal - effectively adding 2 bits to the ADC!!!.

It all depends on your exposure length! I've successfully photographed nebula with a telescope attached to my camera. Using imaging sensors I've measure the black of an LCD display. (Not with any huge accuracy but hey, the sensor was picking up photons...) Exposures were on the order of minutes to 30 seconds.

I read your earlier question on luciferase. I take it you've not been able to shoot it yet? Can you ask those who did and see what they did or is this question just for general knowledge?

Not the answer you're looking for? Browse other questions tagged low-light science lumen or ask your own question.

18
What is the difference between luminance and illuminance?
8
What is "solid angle" and how does it relate to photography?
4
Assuming a perfect sensor, what is the physical limit of ISO/pixel area?
2
Capturing darts in long exposure

16
What is the inverse-square law, and how does it apply to lighting for photography?
10
What are the consequences of making camera bodies black?
9
What type of camera setup is required to take photos of luciferase?
4
Why isn't the gain on phase-detect autofocus sensors increased in low light?
1
What are the best camera settings for taking pictures in a limo?
1
How can I connect a cheap digital camera to my 1960s spectrometers?
3
What tiny lens to shorten the focus on a tiny camera?
1
How to get the most out of low-level monochromatic light?
1
How Schlieren Photography can be done using mobile camera?