I took a photo where I changed the aperture of the lens during the exposure. I was hoping to get a cool or unusual effect, but I didn't. Why not, and is there any really interesting effect that I can get by changing the aperture mid-exposure?

I know that changing settings within an exposure can yield interesting (artistic) results. For example, changing the framing lets you blur the background while retaining a sharp image of a fast-moving subject; zooming in or out surrounds the in-focus subject with a neat effect; you can do several things by changing the lighting, from light painting and light trails to long exposures and using flash with first- or second-curtain sync.

I was wondering what else I could change, and since I don't know how to change ISO or what it means to change shutter speed mid-exposure, I wanted to try changing the aperture during the exposure by rotating the aperture ring on a lens during a very-long (long enough for me to change settings with some accuracy) exposure.

I took a photograph in a dark room that was exposed correctly at f/2.8 and 4 seconds. I decided to use 4 aperture settings, each accounting for 1/4th of the overall exposure. Since my lens has an aperture range from f/2.8 to f/22 (in half stops, so I had to click through two "settings" for each stop), I decided to use f/2.8, f/5.6, f/11, and f/22. That gave me this table of the amount of time to spend at each aperture:

which I think should result in the same exposure (Ev=Tv+Av) as 4 seconds at f/2.8.

I hypothesize that this combined exposure will give me a final image very similar (both exposure and depth of field) to a a 32-second exposure at f/8, although I'm hoping something unique or cool will happen.

I focus on some foreground objects on a table, set up a timer so I can count seconds, start holding down the button on the remote shutter release, wait one second, rotate the aperture ring 4 clicks as quickly as possible, wait another four seconds, rotate through 4 more clicks, and then another 4 more clicks sixteen seconds later, and then wait sixty-four seconds and then release the button on the remote shutter release. I look at the result, and... I get a pretty normal-looking picture. 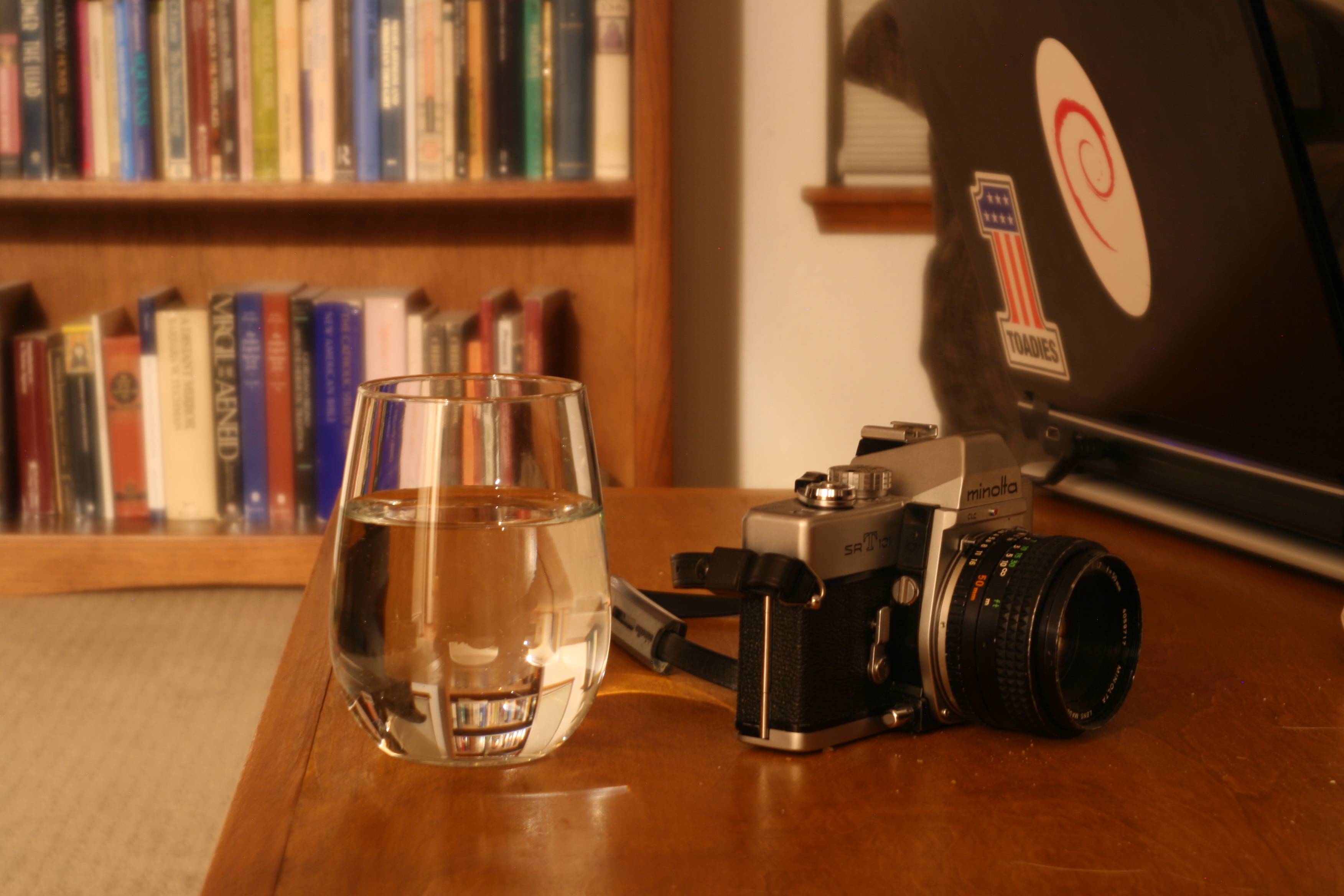 I set up my camera for a 32-second exposure (by setting the shutter speed to 30 seconds), set the lens to f/8, and take the picture, and get a somewhat-similar picture. 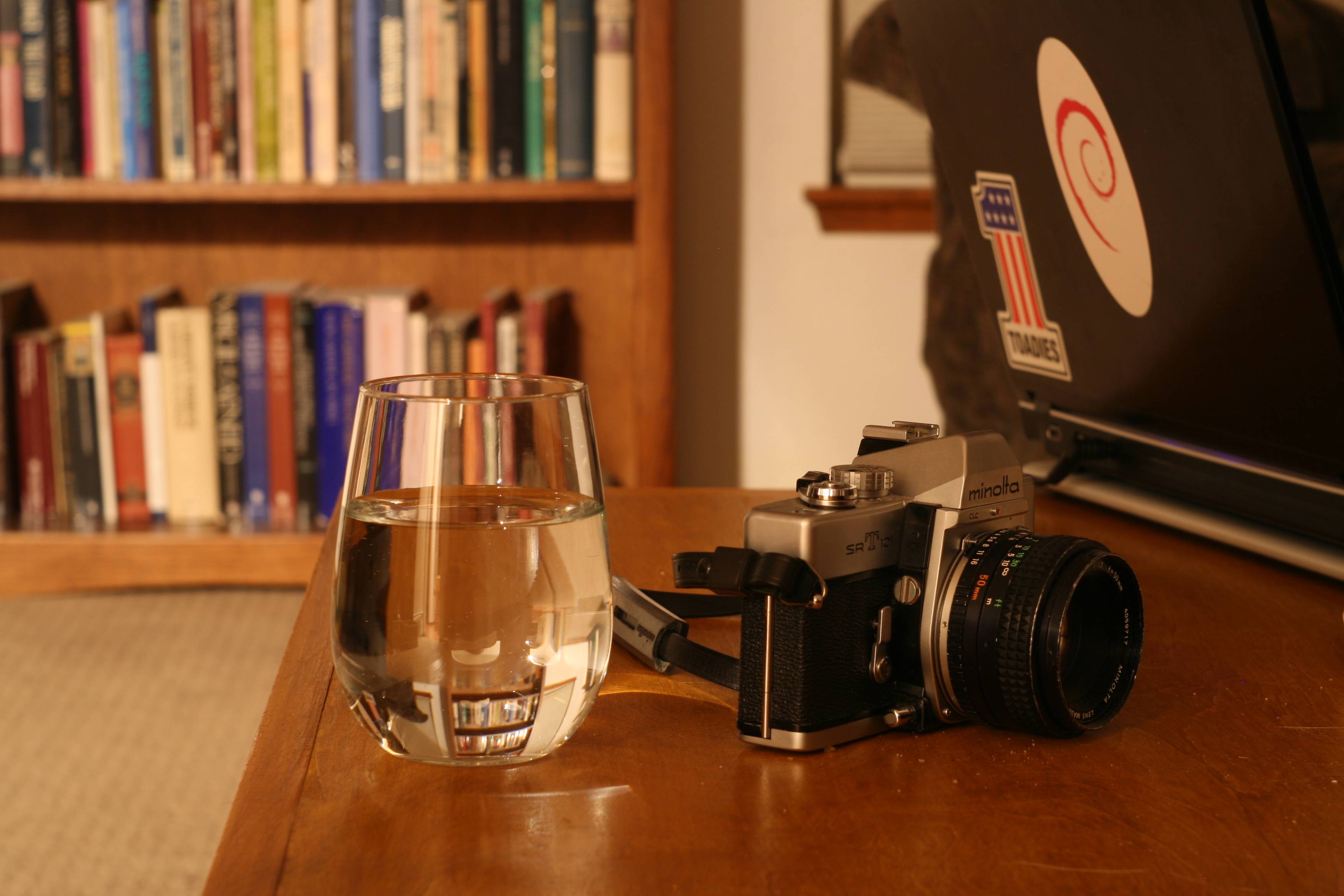 I look closer at the two pictures, ping-ponging between them in my image viewer trying to spot differences, and I see:

So, back to my original question: is there anything I can do with this technique to get some interesting or unique effect? Can I compose the scene differently or change the focus point to get better results? Would a different selection of apertures yield a more interesting effect?

The only idea I have for something mildly interesting is to create a photo with sharp subject that has out of focus "halo" around it.

I didn't test this because I don't have a lens with an aperture ring but I tried to do something similar by changing the focus - not the most impressive picture I've ever shot but at least it gave a unique special effect.

For a static scene, I'd expect the results to have DOF almost as deep as at the tightest aperture (you do record details at that aperture, but they are somewhat blurred by wider apertures - reducing contrast), with some camera shake mixed in. Indeed, this would give an effect very similar to just using an in-between aperture - not very exciting per se.

To have the method resulting in something more unique, something should change in your scene while you're changing the aperture. For example, you could fire key light with one aperture and fill light with other, making areas lit by different lights have different depth of field. In following example, note how the subject is fully sharp (the rear part would be blurred on a wide aperture shot), while the background is blurred (it would be much sharper on a narrow-aperture shot): 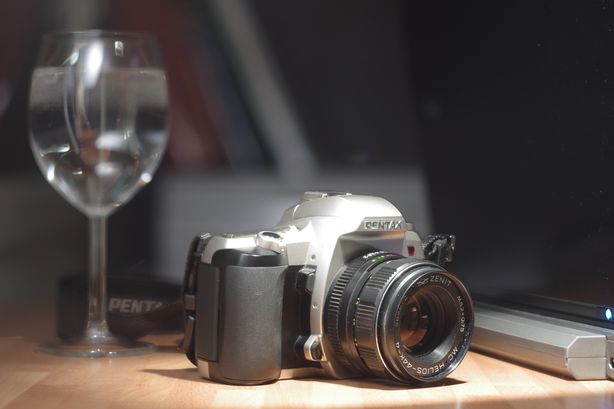 For comparison, here's the same image taken with only wide aperture... 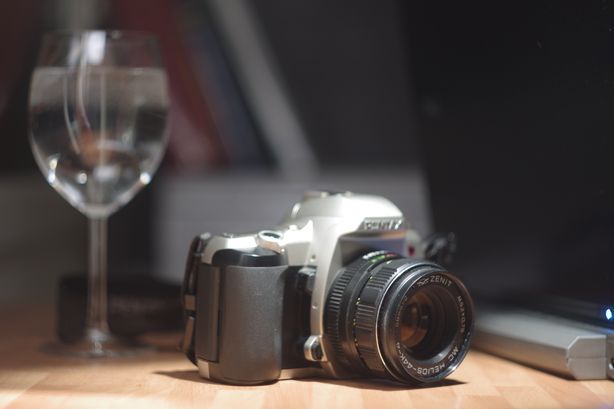 ...and only with narrow aperture: 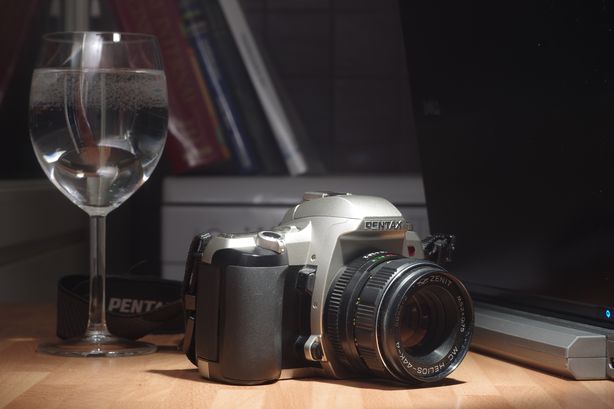 To reduce camera shake and allow for unexposed scene adjustment, you could shoot the different apertures as separate frames and combine them in post. Combined with repositioning an object, this could result in image where the object is apparently blurrier closer to focus plane and sharper further away.

Perhaps choosing a background with greater contrast or with some moving elements would produce more dramatic results but I can't really see what else you could expect from this technique.

What you reinvented was the soft-focus lens, with the minor quibble that the in-focus subject itself is sharply focused rather than having a diffused glow. The out-of-focus elements, on the other hand, are both partially in focus (due to the greater depth of field of the smallest aperture you used) and partially blurred (due to the narrower DoF of the widest aperture), an effect you would tend to get with a lens that had a lot of spherical aberration using your smallest aperture.

It may be an effect you want to play with a bit more -- in the right circumstances, it could make a great vintage-meets-modern look for, say, product photography. That is to say, with the right levels of contrast and so forth, the look could have considerable commercial appeal in the right markets (think upscale lifestyle products, like fine watches, pens and horrendously expensive booze). Having things in the background and extreme foreground that are understated but identifiable can do a lot for product association, giving the viewer the idea that what you're selling (the sharply focused subject) goes with the rest of the package. The technique would probably work better with more contrast in the out-of-focus areas, particularly with a low key background having feature highlights.

If you want changes during exposure to cause visible effects you need to select changes that cause drastic visible changes in the photo.

Moving the camera, zooming, photographing moving subjects (light trails) and changing the lighting (including flash and light painting) are all examples where if you took lots of normal photos instead of a long exposure one all the photos would have been drastically different.

If the only change caused by modifying the aperture is depth of field don't be surprised the only change you see is in the result photo is the amount of background blur.

You are just averaging your aperture, that is all. This averaging will only differ from a middle aperture position in that the typical blur around less focused objects is not normally distributed. As a result, algorithms for sharpening blurs will likely result in different and/or larger artifacts than usual. Without external sharpening, blurred objects will likely have a more pronounced core than usual. Another answer described that as sort of a "halo" effect. Basically, you get some of the bokeh of a large aperture while retaining some of the definition of a smaller aperture. The difference to a medium aperture setting will not be all that large but you have less variation of fuzziness over the depth of field. Basically you emulate a lousy camera in that intermediate depth range which is not quite sharp but not "mathematically" unfocused either.

Perhaps adding a burst of flash while at the narrow aperture, and then open up the aperture while dragging the shutter could create something interesting. Or the other way around.

But I doubt it.

You can get some funny results with this. e.g. if you shoot a longs exposure at F22, and the same shot at F 1.8 to get bokeh, or you put it out of focus or something different, you can overlap images and partly remove the stuff you don't like.

Like in this image here, you see the lights with stars, and lights with bokeh combined: https://www.discogs.com/release/10009699-Lost-Perceptions-From-This-Point-Of-View/images

18
What is the Orton Effect and how can I apply it to digital photographs?
18
How do I achieve fireworks pictures such as the hirobamboo method?
19
Why does a 15-second exposure on my camera actually last 16 seconds?
8
What shutter speeds should I use for cars in motion and slow-sync flash?

4
Why doesn't the background become blurred when I change the aperture on my Fujifilm S4000?
10
Why does my aperture setting change as I zoom on my DSLR kit lens?
7
Why is F/8-F/11 called a "Who cares aperture"?
1
Is there a way to quickly take two photos at different apertures?
10
Are the aperture, ISO and shutter speed stops perfectly interchangeable?
3
Why is actual exposure changing as I go from one extreme to the other in aperture priority mode?
0
Why do I get the "Press Shutter Release Button Again" error when my D3200 isn't set to max. aperture?
0
Why is it not possible to change Aperture in Livewiev on a Nikon D5300 when using manual movie settings?