What is the reference point that the focal length of a lens is calculated from?

I understand the idea of a focal length for a single lens, i e the distance from the lens to the point at which parallel rays of light converge. However, in the case of a photographic lens with multiple lens elements, where exactly is the focal length of the lens as a whole measured from?

Let's start with the simple case, a single element:

Parallel rays entering the lens will focus at some point (F), and the focal length (f) is given by the distance between the center of the lens (the optical center) and the focus point.

So the reference point is the optical center of a single element.

OK, but what about multi-element lenses?

For multi-element lenses there is no reference point you can find easily. As David says, the reference point is the center of a hypothetical single element with the same focal length.

This reference point can be anywhere - in front of the first element, inside the lens, or behind the last element.

How can the optical center be shifted outside the lens?

In this diagram there are two element groups. The first group (to the left) acts like a "normal" (convex or positive) lens, causing the rays (blue lines) to converge. The second group (to the right) is the telephoto group, acting as a negative lens that spreads the rays.

The net effect is that the focus point will "see" the equivalent of a single positive element much further away (indicated by red dotted lines). It's the optical center of this hypothetical "equivalent single element" (H') that is the reference point for measuring the focal length (f').

Inverted telephoto: You can swap the groups to put the telephoto group in front. Then you get a (wide angle) lens where the distance between the last element and the focus point can be greater than the focal length. This construction is called a retrofocus lens.

Mirrors: You can also use mirrors. Mirror lenses "reuse" their physical length by bouncing the rays back and forth. Again the focus point will "see" the equivalent of a single element much further away.

Why would you want to do that?

For long tele lenses, it's because a standard design would give a lens that is physically too long to be convenient:

For wide angle lenses, it's to give more space between the lens and the image sensor. As an example, there are 10mm lenses for DSLRs, but 10mm between the sensor and the lens wouldn't leave enough room for the mirror. So ultrawide lenses are generally designed as retrofocus lenses. 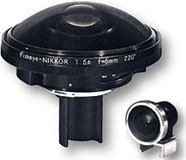 7.5mm fisheye without retrofocus. Note the tube sticking out from the lens mount to get the elements close enough to the film. Mounting the lens required mirror lock-up, and you couldn't use the viewfinder or the built-in metering while the lens was mounted. (Image from B&H)

Then how can I check the focal length of my lens?

"When a photographic lens is set to "infinity", its rear nodal point is separated from the sensor or film, at the focal plane, by the lens's focal length."

Which leads to the question... What is a nodal point? Also answered by Wikipedia as:

"The front and rear nodal points have the property that a ray aimed at one of them will be refracted by the lens such that it appears to have come from the other, and with the same angle with respect to the optical axis."

With a complex structure that is a modern camera lens, the rear nodal point isn't always going to be in the same place, so the question of exactness will depend on the lens.

To expand on the Nodal point:

Simple definition: it is at the center of the equivalent single element meniscus lens which has the same focal length and aperture as the compound lens under test.

The most practical aspect of the Nodal Point of a lens is that it is the point around which the lens can be swung without producing any movement in the image. For a simple one-element lens, the node is in the center of the lens; for a folded optics system such as a Schmidt-Cassegrain telescope, the node is way out in front of the lens.

It is a bit tricky to set up a physical test to find the nodal point of a lens. I'll try to explain it without visual aids:

Consider a tripod mount. The vertical axis of rotation of the tripod head is going to be the place where we are going to put the lens's node. To do this, the lens has to be mounted on a plate that allows its distance from the tripod axis to be varied. In addition, the image must be projected onto a screen not attached to the lens (so the camera body cannot be used!). We look for the combination of screen position and slider setting where the tripod head can be rotated and the only effect on the image is vignetting as the optical axis of the lens moves into / out of being in line with the screen.

A real practical implication comes into play when you are taking panoramic shots. For there to be the least distortion between images - and hence better stitching or tracking - the camera has to be turned around its nodal point. So putting your pocket camera - or even your fancy pro DSLR - on the tripod directly, using its body's mount point, is going to mean you are rotating around somewhere between the nodal point and the image plane, except possibly with some wide angle lenses.

Generally speaking, for an apparent 1:1 fov lens (50mm on a full size imager, or on a 35 mm film body), the node will be somewhere near the middle of the lens. For a zoom lens at full zoom, it is likely to be out in front, and for a wide angle it will be somewhere behind the lens center. Whichever you are using, the node will be at the stated focal length in front of the camera's imager.

(this was the subject of one of my more intense Physics labs back in the day, so even tho I got an A for it there is a 45 year memory gap twixt now and then, but I think I have the general details right still).

Not the answer you're looking for? Browse other questions tagged lens focal-length optics or ask your own question.

3
Focal length measurement and definition in DSLR cameras
27
What is the shape of the focal plane?
4
Does wide angle equivalent in crop sensor skew image?
3
What exactly is focal length when there is also flange focal distance?
1
Why are lenses characterized by focal length and not the effective field of view?
5
What does it mean that a lens is x millimeters?
3
Is lens focal length specified considering the effect of barrel distortion on field of view?
3
where is the pin-hole point located in an SLR?