Can telephoto lenses cause the background to be darker than the foreground in the same light?

I took this photograph yesterday afternoon at around 5:15pm EDT, about two hours before sunset: 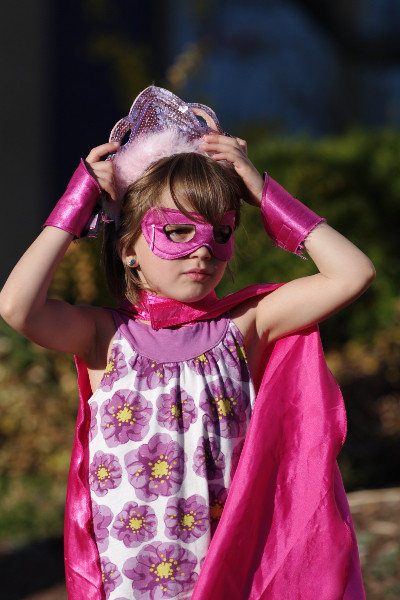 The sky, in my perception, was bright, and my little subject is standing in the same lighting as the bushes behind her. She's well-exposed, but the sky and background foliage appear darkened — even though they were most definitely not in the shade. To my eye, everything was bright, and while I'm not unhappy with the contrast in the final result, it seems a bit strange.

This is a linear histogram of just the foreground subject (selected by hand):

and here's the same for the background:

and for completeness, the full-image histogram:

Here's an iPhone snap taken a few minutes later; she's in the shade in this, but when the above picture was taken, she was in the bright sun by the shrubs you can see in the center background, as are the shrubs themselves. 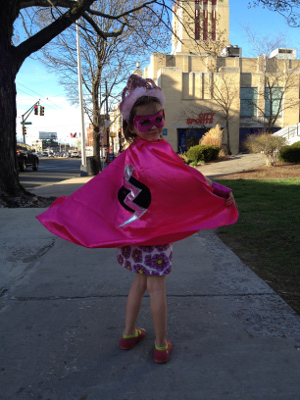 That's far from a technically-great image by any measure, but you can see the brightness of the sunny areas.

Here's the key EXIF from the image:

What's going on here? Is this somehow an effect of the 200mm focal length I used? And if so, how could that be? (I wouldn't think this to be the case, except it's not something I've really noticed with my more-typically-used shorter lenses, even in similar outdoor situations.) Or is it simply a matter of the difference in tones and reflectivity of her bright clothes and light skin as compared to the green bushes? Are my eye and brain compensating for the dynamic range such that my judgment of the scene doesn't match reality? That seems plausible, but the sky was definitely bright — we've been having uncharacteristically lovely spring weather in Boston — and it appears rather dim in the photo.

I don't think that focal range has anything to do with it.

So I think that the darkness of the background is simply due to the fact that it reflects significantly less light than your main subject that the exposure has been metered for.

When you are physically present at the scene, your brain makes up for this, and what you perceive is that they are of equivalent brightness. But when you take a photograph and look at the photograph, it will reveal the difference in light reflection.

To add to what Pete said, not only do the leaves of the bushes have lower reflectivity, but on average some leaves will be facing the sun, some won't, and some will be shaded by others. Note that the sun is coming sideways to the picture. The girl's right side is much brighter as a result. Consider a good fraction of the leaves will be shaded by others and therefore more like behind a fold of the dress on her left side.

No, the focal length of the lens has nothing to do with this. On average, the brightness of the light from the bushes and the light from the dress, especially on the girl's right side, is very different for a combination of reasons.

Not the answer you're looking for? Browse other questions tagged exposure telephoto dynamic-range or ask your own question.

5
Are prime lenses sharper than normal or telephoto zoom lenses?
3
Which long focus prime lenses are actually telephoto in the technical sense?
7
Is there a camera which can capture all shades from dark foreground to bright background?
1
Are the stops of the dynamic range of a cameras sensor the same as the stops the light meter shows?
5
How can Sony A7r iii get more dynamic range than A7r ii from the same sensor?
11
Either background is overexposed or the foreground is underexposed. Are there possible solutions/approaches?
2
Why do moon shots bring out the worst in telephoto lenses?
13
Why is a lens darker than other ones when applying the same settings?