Why are objects far away inverted through a lens but not through the viewfinder?

When I look through a lens the image of objects far away are inverted but when looking the the viewfinder on my camera they are not. Why is this?

I am having a hard time understanding why objects far away are inverted in the first place.

Could anyone provide an explanation or ray diagrams (Preferably using a point source on an object and including the lens in the human eye)?

EDIT: Thanks everyone I now understand why objects far away from a lens appear inverted. But can anyone now explain how the camera elements make far inverted objects appear right way up without also making close normal objects appear upside down?

EDIT 2: I can't provide an image right now because I am at school but you know how when you look through a magnifying glass and far objects will be inverted and blurry but close objects will be sharp and erect (normal)?

So does the lens produce objects with different orientations or doesn't it??? If not why does it look like it does when I look through the lens, and also based on the convex lens diagrams it seems like it should. If it doesn't then how do the other lenses in a camera lens attachment correct the convex lens. And if it does then why does film and the viewfinder show objects with the same orientation?

Sorry for asking so much. This is just so confusing!

EDIT 3: This is how I thought a camera lens would work: 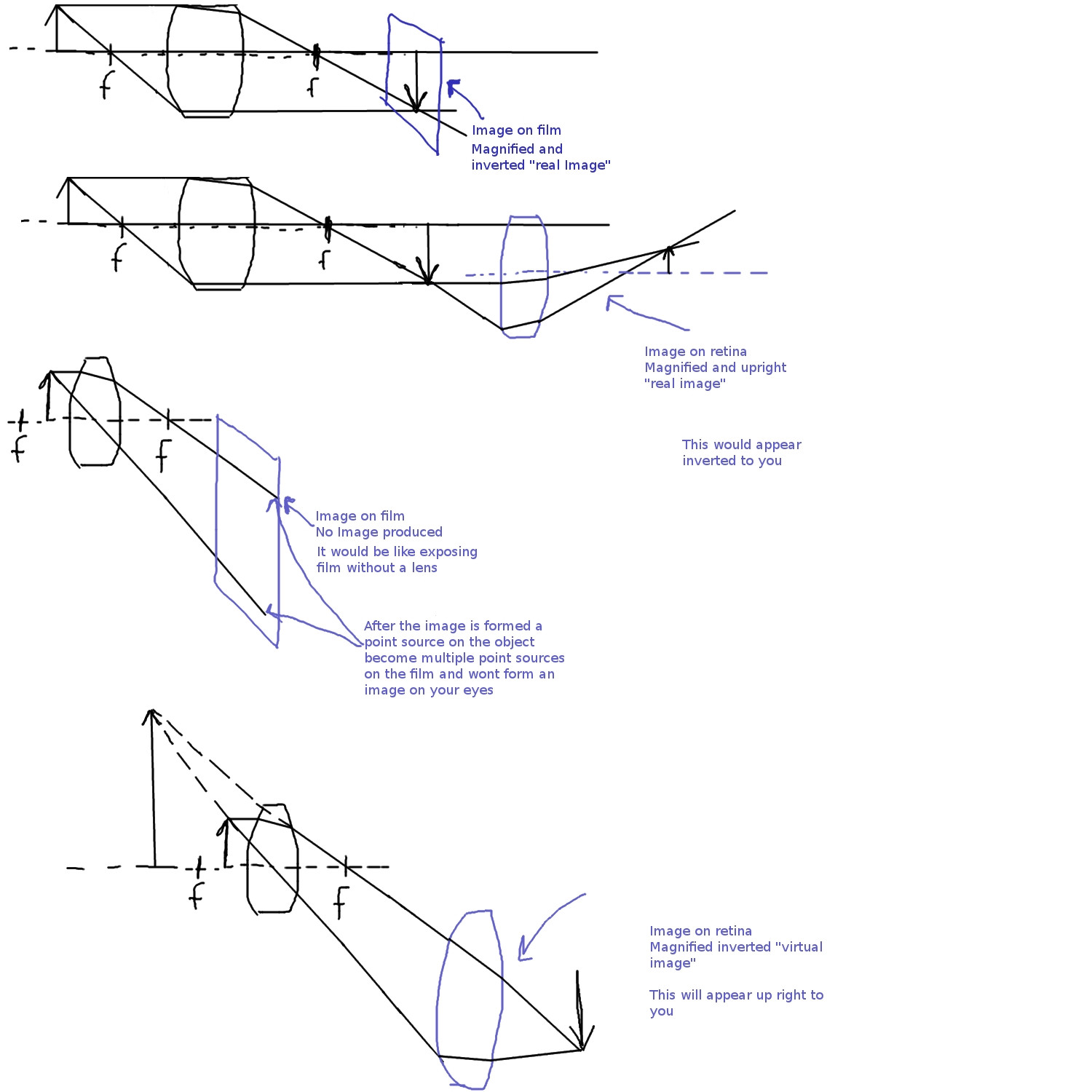 I forgot to mention in EDIT 2 that it seems that close objects shouldn't even appear on film based on the diagrams.

EDIT 4: So objects really close to the camera lens should not appear on film, correct?

So...Why do all objects in the viewfinder appear upright??? Since my eye is reviving both the light rays from close objects (virtual upright images) and far objects (real inverted images) shouldn't really close objects and objects farther away have different orientations? Just like looking through the lens directly? How does the viewfinder change anything?

EDIT 5: Thanks so much everyone. Thanks for the help.

So lets say I put a pen right in front of the lens and look through it directly. The image I see is upright so this means it is a virtual image. Now lets say I attach the lens to the camera and look through the viewfinder. I can still see the pen but it is blurry (because the focal length is longer, right?). The lens forms a virtual image of the pen but I can still see it in the viewfinder. Why is this? If the viewfinder shows me exactly what would be on the film it should not show the pen at all (based on the diagrams in the image above) should it?

EDIT 6: Maybe it should form a blurry image. Like a pin hole camera or something. In any case thanks for all the help everyone. I know it can be frustrating trying to teach me. I can be pretty dense sometimes.

It is "easy enough" to explain the basic question with a ray diagram or similar means - see below
BUT it is important to realize that the answer to why viewfinder or human eye images are not inverted is "by design" or "because" (choose one, both the same essentially). That is to say, the system requires the outcome to be a certain way, so whatever steps are required to implement the outcome are provided.

In the case of a viewfinder, extra lenses, mirrors or prisms (or a combination of these) are added as required to achieve the final result. The real question becomes not "why is this this way up" but how is this done.

In the case of the human eye, the image on the Retina IS inverted and the brain looks at it the "right way up" as far as the viewer is concerned.

The information below from this excellent site shows how basic inversion works. 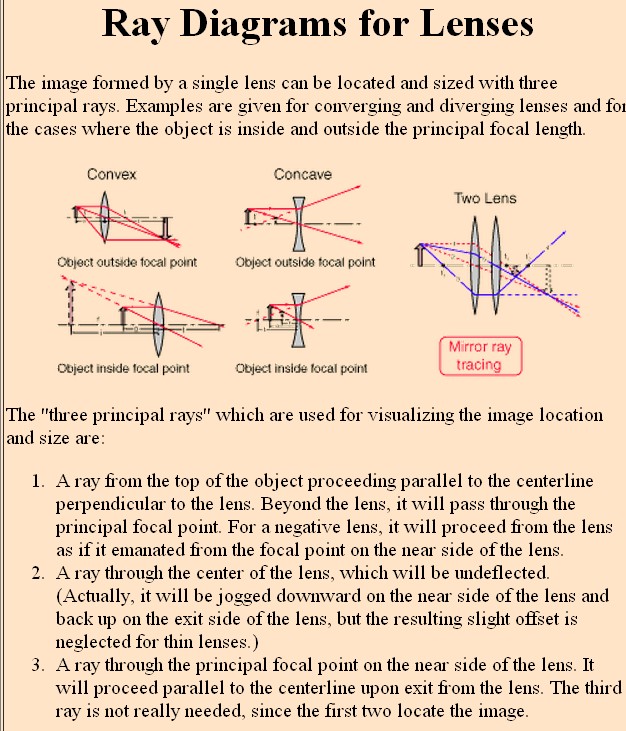 In the case of the eye, the image is inverted:{ From here - low tech but interesting } 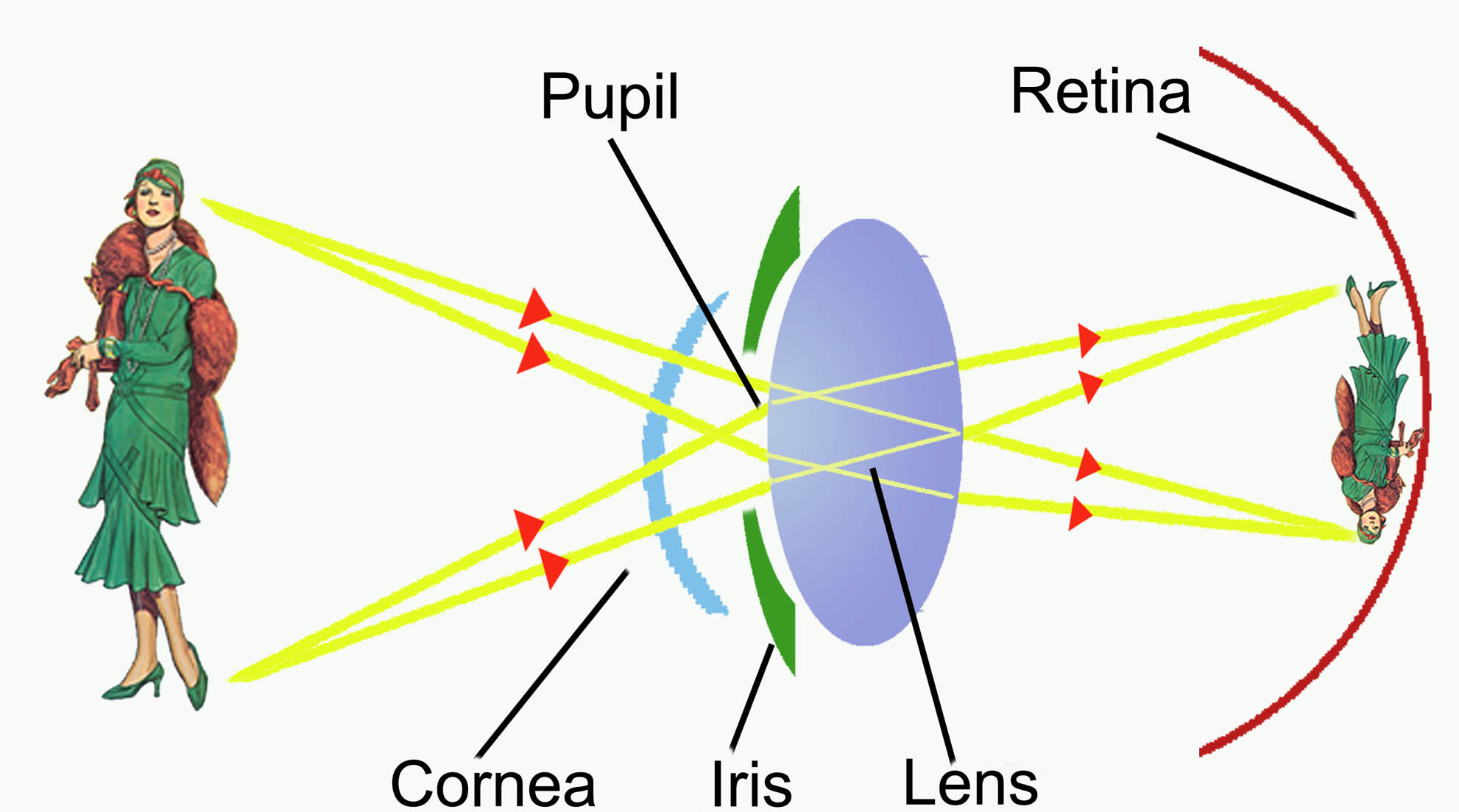 Note that while the above image grabs your attention as it demonstrates inversion, it actually does a very bad job of showing how the eye lens works. As the eye lens is increasingly embedded in the cornea, the air-cornea interaction does most of the 'lensing' while the cornea-lens interface only manages about 10% of the total bending.

An excellent discussion of this is available here - see the In your eye and a reasonably correct image of how light is actually bent by the eye is shown below.

This link provides a good (sometime complex) answer to your question.

"Anti-focusing" of objects closer than 1 focal length to lens:

The Question: This is a precis of your question - all text is yours.

What you are describing is exactly what happens, but because the defocusing of objects closer than a focal length from the lens is progressive as distance inside the focal point increases - just as your diagram suggests - they do not just "vanish" as they come inside the critical distance - rather they become progressively more indistinct the closer they get to the lens face.

The pictures below show reasonably extreme examples of this 'feature' being used to good effect to nearly completely remove closeground items from the photo - in this case vertical bars and a reasonably heavy mesh are nicely "vanished by being defocused and spread so widely as not to be noticed.

Foreground objects (in this case a heavy mesh and cage bars) which are closer to the lens than its focal length are "anti-focused" to the point of near invisibility.

Your diagram 3 with cage bars added: 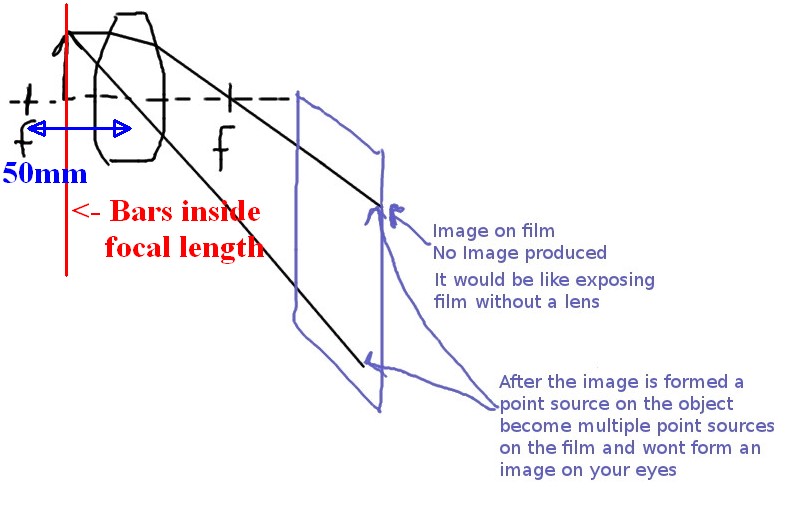 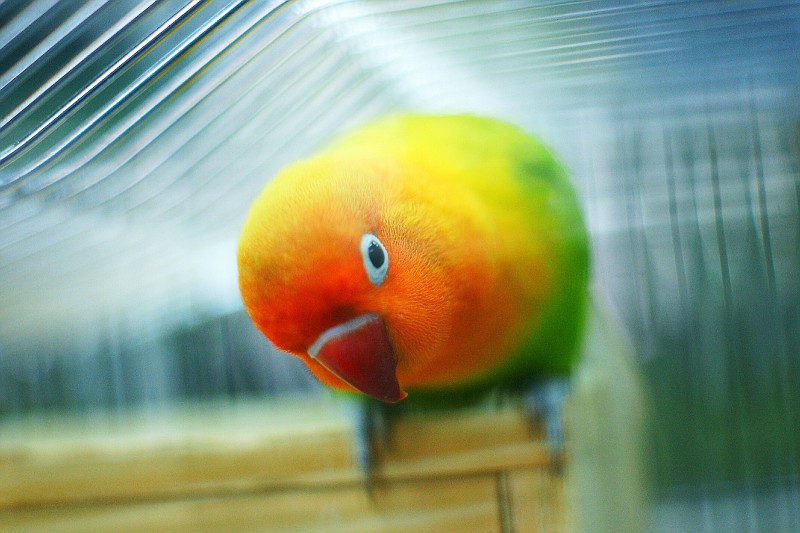 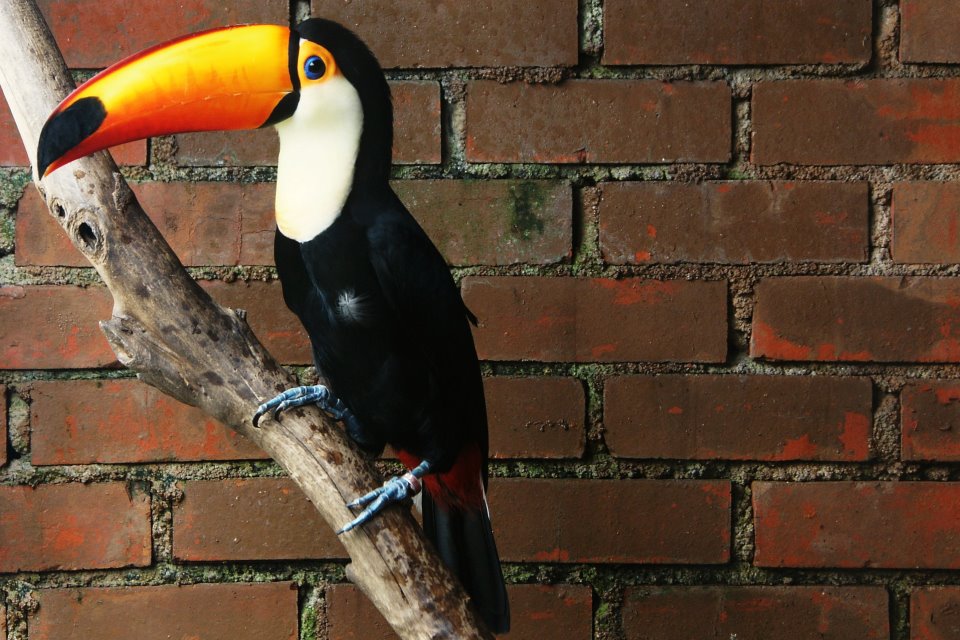 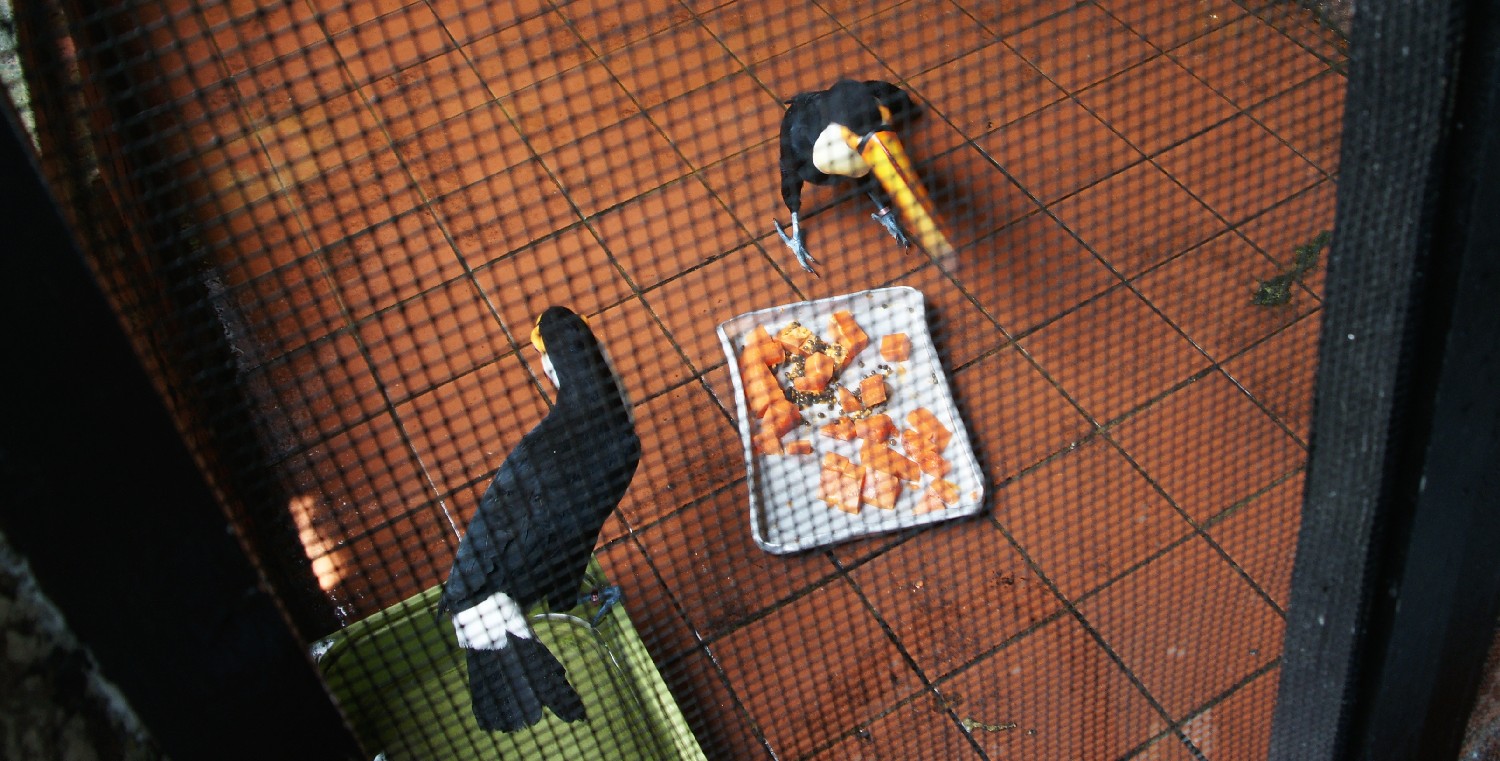 Note also that if an image formed by one lens is used as the "subject" for a second, that second lens won't won't "care" on which side of the first lens the image appears, nor even which side of the second lens the image appears; the same position and size formula will apply. The distinction between virtual and real images is only relevant when trying to place a target (like a sheet of film) on the focal plane, and can most simply be expressed by observing that lenses can't do anything if they're not located between the real subject and the intended focal target; if the final lens would present a virtual image, that would imply the target would have to be between the real subject and the final lens, rendering that final lens irrelevant.

With regard to the original question, the reason that a telescopic viewfinder always shows objects upright is that while excessively-close subjects may cause the primary lens to generate an image which is nearly infinitely far past the second lens, the second lens always produces an image which is between zero and one focal lengths past it, such that the final viewing lens will never see an object so close as to change its inverting behavior.

Not the answer you're looking for? Browse other questions tagged lens optics viewfinder or ask your own question.

3
Why does an aperture crop the image when you look through a lens itself but not when you look through the viewfinder?
0
Why do I sometimes get a shaking viewfinder image in my Canon 550D?
5
Why do the Nikkor non-AI 135mm vs 50mm f/1.8 work differently when I look directly through the lens?
3
Why doesn't a zoom lens at 25mm on a Micro Four Thirds camera have the “normal” 50mm lens field of view?
4
Donuts in the bokeh through the viewfinder of Canon 6D
4
How can I test that the image is inverted in a pinhole camera?
39
Why do stars appear as circles, not points?
2
Why can my eye focus on the real image of a convex lens at many distances from the lens, but a projection only works at a specific distance?
1
A projection of a real-image is one fixed perspective, but looking through the lens with my eye, I see many perspectives. Why?
3
Why did I see sunlight reflection in viewfinder but not in final image?