What is a macro lens?

I've read a few threads on here that mention some elementary descriptions of macro lenses and found some marketing fluff in the box for my Canon about them as well, but being a complete novice I was left a bit confused.

Can someone please provide me with a top-to-bottom explanation of what a macro lens does?

True macro lens gives you a 1:1 magnification -- that is a ratio of size of the subject and its image on the sensor. With 1:1 magnification on APS-C sensor (22×15 mm), you can fill whole picture with area of this size.

Other properties of macro lenses include that they have fixed focal lengths, usually very low distortion (see distortion figures of Canon EF 100mm macro at photozone.de for example). Also, macro lenses tend to have non-rotating and non-moving front elements which is useful since you put them very close to the thing you're shooting.

On compact cameras, macro means "setting where you can focus a bit closer". (Although, as Roddy points out, this can sometimes get you close to actual macro range: Panasonic TZ5 can capture a 63×47mm area, which gives results similar to lens with 1:3 magnification on APS-C DSLR -- image quality aside)

On compact cameras, macro means "setting where you can focus a bit closer".

On some compacts, macro mode can be incredibly effective. My Panasonic TZ4 focuses down to a couple of inches. Mayflies are big, but not as big as you can make them look with a compact in macro mode.

A macro lens is a lens that you can use to photograph on a relatively short distance, to take extreme closeups.

For a short focal length, that means as close as a few centimeters, for a long focal length it can be several decimeters.

There are special macro lenses, but you can also use a extension tubes or close-up lens to give a regular lens macro capabilities.

Examples of macro photos; a bottle neck and a rowan flower. Notice the blurry background, which is common for macro photos as the background is so far away compared to the subject: 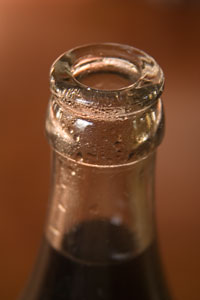 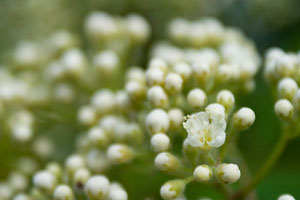 A macro lens is capable of focusing on things that are really close.

A 1:1 magnification means that a lens can focus on something so close, its image on the film/sensor is the same size as the subject itself, so you can imagine that's probably about as close to the lens as the lens is long (depending on the lens design). A lens with a 1:1 magnification ratio or greater is clearly a macro lens. Just to give you an idea, this level of magnification should allow you to get close enough to a 50 cent coin so it fills the frame, and still focus on it correctly.

As with all lenses, the closer you focus, the narrower the depth of field becomes in real terms. Macro photography is often characterised by a very narrow depth of field, creating a lot of background defocus (blurred background).

Macro lenses don't only do macro

Macro lenses are designed to be able to focus close, but that doesn't mean they can't focus out to infinity as well, and they may serve as a good portrait lens too. With very few exceptions, they can focus all the way to infinity. You don't have to use them for actual macro photography (that's something I never realised when I was new to SLRs).

Properties of macro lenses in general

A macro lens of a similar quality and design will typically be more expensive, because its ability to focus so close requires a few design considerations. It may also be slightly more bulky. It may, however, have better image quality in some respects, and not just when taking macro photographs. These are generalisations only and each lens is going to be different.

Traditionally, portrait photographers tend to like to minimise perspective distortion ("big nose effect") so they choose longer, rather than shorter, focal lengths and stand further away. For this reason, 100mm/105mm and 135mm primes are popular focal lengths for lenses marketed as "portrait" lenses, but this won't stop you using something as wide as a 35mm or as long as a 300mm for a portrait - it's about the look you want to achieve.

This is one example of a Macro lens that should be good for portraits.

Not the answer you're looking for? Browse other questions tagged lens macro terminology or ask your own question.

11
What options do I have for a normal and fast prime lens for a Canon APS-C camera?
13
What does the magnification ratio number mean on a macro lens?
10
What is the difference between a Nikon “Micro” lens and a “Macro” lens?
2
What is the DIY repair potential of a Sigma 24-70mm f2.8 EX DG Macro (non HSM) lens?
15
Why does a reverse lens act like a macro lens?
0
What kind of lens defect is this spot on my lens?
6
Why is the Tamron 90mm 2.8 marketed as Macro and not as a “portrait” lens?