The Canon MP-E 65mm works differently than my other macro lenses. Compare:

Assuming that the angle of view corresponds to a 65mm lens at 1X magnification, it seems that by 5X, the angle of view is about that of a 325mm lens! In other words, manual focusing (this lens does not autofocus at all) looks like it has the same effect as zooming on a zoom lens with the plane of focus fixed at the closest focus-distance.

So why is this not called a MP-E 65-325mm instead of simply 65mm? More importantly, what does the 65mm focal-length represent? And how can I use that to frame by shots with less guesswork?

It's called a 65mm because that's the combined focal length (light bending ability) of the elements that make up the lens in its default configuration.

It's common for prime lenses change field of view slightly on focusing, the effect is just exaggerated with the MPE-65. Lots of rules break down when you get into macro and super-macro photography, focal length, f-stop etc. cease to matter as the formulas for things like depth of field and exposure use approximations that assume the distance from subject to camera is much greater than the distance from lens to film plane, which isn't the case with macro. You have to ignore what it says on the lens and use your judgement or trial an error to begin with.

Note it's standard practice to state the focal length of a lens when focused at infinity (to account for minor variations as mentioned above). As the MPE-65 doesn't focus to infinity I assume they measure it for the 1x setting, so the value is not directly comparable with other lenses.

There is one very definite difference between this lens and what is commonly called a zoom lens: focus and focal length cannot be independently changed. Actually, a purist would say unless the lens is parfocal (you can set focus, zoom, and it will stay in focus), it is a vario not a zoom lens anyway.

Consider the "classical" setup to do the job this 1-5X(!!!) lens is meant to do. Unless going straight for a microscope-style setup, you would use a (preferrably already macro optimized) unit focusing prime lens on a bellows. With a unit focusing lens, you always increase the focal length the closer you focus, and this increase is quite significant when going from 1X to 5X magnification.

However, while the Canon lens in question could be described as an "internal focusing" lens (vs "unit focusing"), it does not behave like a typical internal focusing lens (such designs are known for often having a decreasing focal length with closer focus). If you look at the diagrams Michael C posted, the internal structure resembles a zoom design more than a prime design. Coming to think of it, it looks not entirely unlike a zoom design in reverse : You see what could be a complete prime lens of double gauss design at the front, with a floating group as a focus compensator (as you'd have in a parfocal zoom) and what could be an afocal zooming group at the back

The diagonal angle of view obtained when the lens is set at "1X" is 18°40' with a FF camera. That's the same angular view that a typical 135mm lens focused to infinity would yield.

One might theorize that a single element 65mm lens focused at 238mm (the only subject distance which the lens can focus at 1X) from the camera's imaging plane would give the same 18°40' AoV.

One might theorize that a single element 325mm lens focused at 313mm (the only subject distance which the lens can focus at 5X) from the camera's imaging plane would give the same AoV.

My guess is that they did not want potential buyers to consider the lens a "zoom" lens, since "zoom" is a dirty word around hard core macro shooters. If ever there has been a lens for "hard core" macro shooters, the MP-E 65mm 1-5X Macro is that lens.

Many telephoto "zoom" lenses claim to be macro lenses, but they rarely have a maximum magnification (MM) that exceeds 0.35X or about a 1:2.9 reproduction ratio. That's about one-third the magnification provided by a 1.0X or 1:1 "true" macro lens. Such telephoto zoom "macro" lenses are also typically short in the image quality department as well when compared to "true macro lenses" that are optimized for their singular focal length, close focus, and are usually very well corrected for field curvature to give them a fairly flat field of focus.

Canon was probably correct to run as far away as they could from naming the MP-E 65mm 1-5X macro a "zoom" lens. They were also correct to name it MP-E 65mm 1-5X Macro rather than something like EF 65mm f/2.8 1-5X Macro. Like the TS-E prefix for manual focus tilt and shift lenses in the EF mount (EF is for Electro-Focus, but there are a handful of non-AF Canon lenses that fit Canon EOS EF mount cameras, all with non 'EF' prefixes), the MP-E prefix (presumably for Macro-Photo?) immediately indicates that this lens is singularly unique. It is the only lens in Canon's catalog with the MP-E prefix.

Since the MP-E 65mm 1-5X Macro has an optical formula that is unable to focus collimated light entering the front of the lens at any distance behind the rear element, the normal method of determining focal length based on the back focus distance when the lens is focused on infinity does not apply. For any magnification ratio, the lens only has a singular focus distance. The lens is only able to focus at 100mm away from the front of the lens when it is compacted in the 1X position and mounted on an EOS camera with a registration distance of 44mm. At 5X, the focus is set at 41mm in front of the lens when it is fully extended. This translates to a subject/focus distance of 238mm at 1X to 313mm at 5X, as measured from the subject to the camera's imaging plane. At no setting can the lens focus at a distance closer than 238mm or further than 313mm in front of the camera's sensor or film. If the subject is out of focus at a desired magnification, the subject distance must be altered until the subject is brought into focus. If the "magnification" ring on the lens barrel is rotated to change the focus distance, it also changes the magnification. The MFD (Minimum Focus Distance) for this lens at any particular magnification is also the "Maximum Focus Distance" for that same magnification! 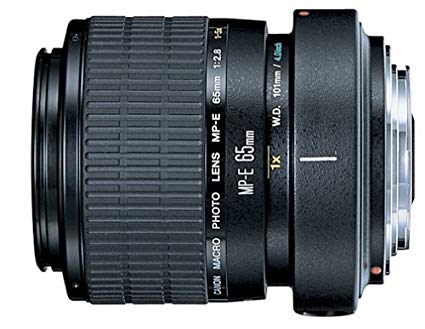 It depends on how you define fixed and variable. As you change the focus distance of many prime lenses, including most macro lenses, the actual focal length changes a little bit. We call this focus breathing. Most fixed focal length lens' focal lengths are defined when the lens is focused on infinity and the light focused at the film/sensor plane is collimated when entering the lens. With Macro lenses that are also capable of focusing collimated light at the sensor plane the difference in "actual" focal length when focused at the minimum focus distance (MFD) will be greater than with a more typical lens that can't focus as close. In other words, macro prime lenses that can also focus at infinity tend to focus breathe more than other prime lenses.

The Canon MP-E 65mm 1-5x Macro lens is listed as a fixed focal length lens, but for all practical purposes the focal length is meaningless. The only thing we can measure is angle of view and magnification at the singular focus distance for various magnifications ranging from 1X to 5X. At 1x the angle of view (AoV) is about what one would expect for a 65mm lens focused at a very short distance of 238mm from the imaging plane, but at 5X the AoV is 1/5 that, or what one would expect from an approximately 325mm lens focused at a very short subject subject distance of 313mm in front of the imaging plane. The lens can only focus at a single, fixed specific distance at any particular magnification setting. At 1X it has an about 100mm working distance (the distance from the front of the lens to the point of focus). By 5X the working distance is only 41mm. Since the lens can't focus collimated light onto the sensor when connected to a camera with the registration distance for which it was designed at any setting, there is no real way to express focal length in the conventional sense.

It also depends on how you define zoom lens. Another clue that the MP-E 65mm is a unique kind of (sort of) zoom lens are the charts included on pages 7-8 of the MP-E 65mm 1-5x Macro User Manual. As the magnification is increased, the effective f-number for any given aperture setting also increases as one would expect when the same sized opening of the diaphragm is used for a longer focal length lens. 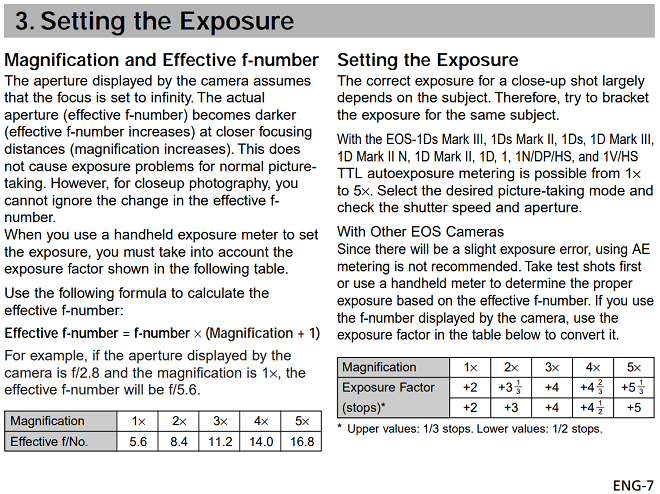 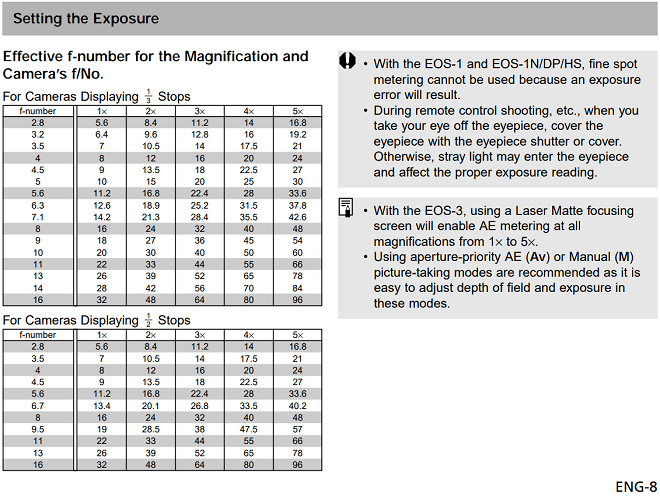 Some might claim that the MP-65mm is a true prime lens with an extreme amount of "focus breathing." But when you have a compound lens system (several lenses behaving as one lens) and the front group and rear group change their relative position in such a radical amount that results in a 500% change in the FoV, I think the argument can be made that it is at least a type of zoom lens, although maybe not the most typical kind. 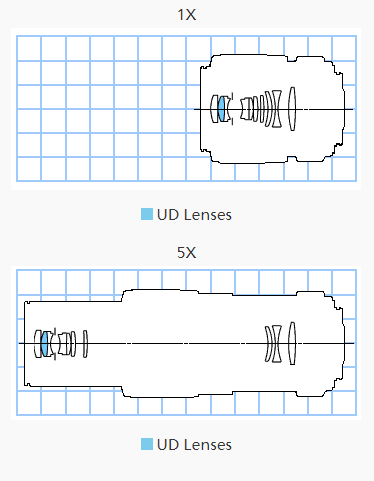 Not the answer you're looking for? Browse other questions tagged canon macro focus zoom canon-mp-e-65mm or ask your own question.

5
Why we can't use telephoto lens for macro objects?
5
Variable focal length for macro lenses?

10
How Much Can Lens Magnification Be Improved Without Significantly Lowering Image Quality?
1
Is there a better macro lens for the Canon EOS system than the MP-E 65mm?
3
What impact do long macro lenses have on DOF?
5
Is Canon MP-E 65mm f/2.8 1-5X macro lens good for photos other than close-up macro shots?
2
What's the magnification of a full frame macro lens on a MFT camera?
1
Why does this lens lose focus when you zoom in but not when you zoom out?
2
How to enlarge an object by x-times with an optical zoom
6
Why does this thin plate disappear when changing focus
1
How to choose between Canon EF-S 60mm f/2.8 Macro USM and EF-S 35mm f/2.8 Macro IS STM
6
Why can macro lens achieve much higher magnification with similar minimum focusing distance?