Why do cell phones have the camera in a corner and not in the middle?

It seems counter intuitive because of how you hold the cell phone.

Most times it's because putting the lens in the center would require unacceptable design compromises.

The average camera-equipped smartphone has a large, flat battery just behind the back cover. Putting the camera in the middle would require splitting the battery or manufacturing one with a hole in the middle, which would get very expensive.

I disagree that the location of the camera is counter intuitive. When I am using my phone(using a wallet as an example here), I hold it in the palm of my hand - exposing the upper corner of where the camera is naturally. This is the way that I normally shoot images with my smartphone.

If I am typing, I use two hands, but the same corner is still exposed easily for taking a picture or video. 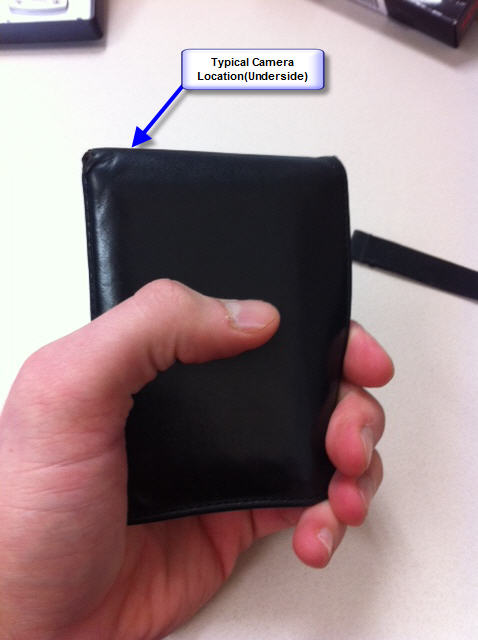 The reason that typical cameras have the lens located in the center of the unit is based on a few things. When modern film cameras were designed, obviously the film was being pulled out of a cartridge, across the exposure area, and into another compartment for post shot storage(sorry I don't know the technical names for these things). When digital cameras were first being produced, manufacturers could obviously alter the design since no film is involved, but as you can see the design is still very much similar to what film cameras were designed.

When you talk about cell phones, the primary function of the device is for talking on the phone, and using the screen to find information. Being a camera is a secondary function. Some smartphones are designed to be more usable as a camera, and as such they have some different configurations for the hardware. For the most part though, a standard smartphone will keep the primary functions in mind when considering design.

As others have pointed out already, the location of the camera lens does make a great deal of sense when you are using the screen as a viewfinder, or holding the smartphone one handed. To put the lens in the middle of the back of a smartphone, would have the user cover up the lens in most usage cases.

If they would have put the camera in any other spot, you would have to use two hands to take a picture or use one hand in a very awkward position, or else you would cover up the lens. I have found that when the camera is in the corner, it is very out of the way, and my hands never block it. Also, the top half inch of a phone usually doesn't have a screen there, so there is more room for the camera lenses on the inside of the phone.

Assuming you are talking about the middle of the shorter axis of the phone and not the geometric center of it, my guess is that it would be even more counter intuitive to talk on a phone where the speakers where not centered. :o)

In my opinion, the "natural" position for a camera in a phone would be exactly where phones have their speakers, but there is no space for both at the same spot.

If the camera was in the geometric middle of the phone your hand would cover the it, even the hybrid models with "real" lenses put the lenses slight off the geometric center, albeit centralized in the shorter axis.

Besides, most shots taken from phones are of relatively far subjects, so the difference of alignment is not that a big deal. On the other hand, close ups are really awkward, I agree.

It seems to me that if the camera lens was in the middle, anyone trying to take a photo one handed would have their hand in the way. If you are able to use both hands, holding the phone is easy and you can place your hands around without interfering with the lens, but with one hand its challenging. Holding in landscape often means using two hands.

Since most texts, email etc are read in portrait, you find many simply take photos in portrait orientation because they 'show big' in the text or email. As a photographer, I prefer to use the landscape orientation, and take advantage of the screen, but I have found most complain if I send a landscape oriented image.

Probably because not much thought was given to it and it is much easier to leave room to one side than to do so in the middle which probably complicated manufacturing.

You may notice that cameras usually have the lens towards the center which avoids your finger blocking the lens but it is not always the case. Many fixed lens cameras have the lens centered vertically but to one side now, this is most common for ultra-zooms where the lens sticks out enough that getting your fingers in the way is more difficult.

Now look at ultra-slim cameras with folded-optics and you will find the lens almost always in the corner and therefore the picture of the index finger in countless photos! This is how Minolta had it in the original design on the Minolta X. They actually managed to solve the problem on the X50 but only Pentax copied in the the Z10, almost everyone else stuck the the easier to build corner lens.

My intuition here is that corner placement is the most conducing to very size-limited cameras and therefore cell-phones too, which are valued for their small form-factor.

Behind that little lens is a little light pipe used to give some focal length. If that pipe, which takes up space, were put in the middle of the phone the designers would have to split all the electronics in half to make space but with the lens out at the edge the pipe location isn't a problem.

There are many great reasons for placing the camera into the corner.

A phone is, primarily and foremost, a phone. The camera is there for convenience for the statistically average user. If it was anywhere else, like an actual dedicated camera, in the middle, like everyone else has said, would be expensive and issue laden. Camera's on phones are not designed to be professional and top quality in both output and feature design. It is there to be convenient and affordable for when a memorable occasion (like glimpsing oneself in the mirror of a public toilet) pops up. I don't see any reason not to "buy" the answer that so many people have given. Phones may be expensive now, but costs still have to be kept down. And if the majority of users find that the camera is least in the way, and easiest to use in the majority of situations, in a certain location on the device, it would be foolish to move it, unless for a semi-pro photographers backup camera/phone/device-thing.

A lens in the center of the short side of a phone favors portrait shots. A lens in a corner is nuetral so landscape and portrait shots get equal treatment. Landscape shots match our televisions and are prefered by those who have studied photography.

Not the answer you're looking for? Browse other questions tagged cameraphones or ask your own question.

6
What are some camera-phones with decent shutter-release response (or workarounds)?
27
How do I get the best results with a cell phone camera?
9
Why does my HTC cell phone lens appear so dirty, and how can I clean it?
9
What is the focal length on your typical cell phone camera?
1
Could a phone-camera have a medium-telephoto lens and still fit in a phone?
1
Why do camera phones have lenses of inferior quality?
1
Is the relationship between object distance and magnification highly dependent on the camera used?
3
Camera Phones with longer focal lengths for Portraits?
1
How to select a cell phone (mobile phone) that will have the best camera hardware and software?