I never understood what the f really stands for in the f-stop values, like f/1.8. Wikipedia explains it in various articles, but I still find it very confusing. What I understand, though, is that it has something to do with focal length.

References to back up my confusion:

The article about aperture goes on to claim:

The amount of light captured by a lens is proportional to the area of the aperture, equal to:

Where f is focal length and N is the f-number.

The "f-number" is mentioned here. But the article about F-number claims:

This seems very recursive. Why does the aperture article refers to both the focal length and the f-number, when the latter article claims that f-number already carries the property of focal length?

What you have to consider here is that the 85mm lens has a much narrower field of view, therefore it has to gather the same amount of light from a much smaller area - to compensate the narrow view, aperture has to be bigger.

How much the aperture has to be bigger is linearly correlated to focal length. We could say that a 24mm lens with 13.3mm aperture can gather as much light as a 85mm lens with 47.2mm aperture, but talking about the F-number makes this much easier to notice.

The terminology is confusing, isn't it?

To explain the equations further:

The second equation says that the focal length f divided by the aperture diameter d is the f-number N. Or f/N = d. So f/1.8 literally means "focal length divided by 1.8 (equals diameter).

If you look at the top equation since f/N = d, then f/2N must be d/2 (and d/2 is half the diameter, so is the radius of the aperture). And we know that the area of a circle is pi r squared. So pi times f/2N squared is simply the area of the aperture opening.

I think the confusion comes from two different things the explanations erroneously lump together as "amount of light".

The true amount of light a lens lets in is only a function of the aperture area. Since area goes with diameter squared, this is proportional to the square of the diameter.

Notice that the brightness of the focused image goes down with the square of the focal length, but goes up with the square of the aperture diameter. That means if we were to take the ratio of the two, we'd get a normalized measure of how bright the focused image will be for exposure purposes. That ratio is exactly what f-stops are. These are commonly written as f/n, like f/8.0 or f/11 for example. That is just a expression. The full equation is:

Since that gets cumbersome to write and say all the time and the point is to not have to care what the absolute focal length and aperture are, this is abbreviated to "f/4", with "f" referring to the focal length of the lens and "4" being the ratio of that focal length to the aperture diameter. The second example was:

or "f/8". Other than minor light losses and other subtle effects you can ignore most of the time, one lens with its aperture set to f/8 is going to make the same brightness focused image as another lens at f/8 regardless of focal length. This also explains why long lenses tend to be larger in diameter. A 50 mm lens only needs a 12.5 mm aperture to achieve f/4. A 300 mm lens on the other hand requires a 75 mm diameter aperture to make the same brightness image of the same subject. That means basic physics says a 300 mm lens needs to be at least 3 inches in diameter somehow to achieve f/4.

What f stands for in the f-stop values

times more light. However, this consideration is only true for the amount of light, collected from each individual point of the object, not the total amount of light arriving from the object space.

One thing that I also used to find confusing is that the amount of light collected at the sensor with the same shutter speed by different lenses with the same f-number is the same. How comes if one lens is clearly larger than the other?

Here is an illustration of what happens in the camera: 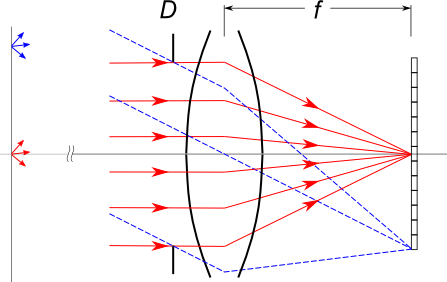 (Note that since I made the object distance infinite, the field of view in the object space is an angular one.)

If we change the lens to the one with a longer focal length while keeping the frame size the same, the field of view of the lens decreases: 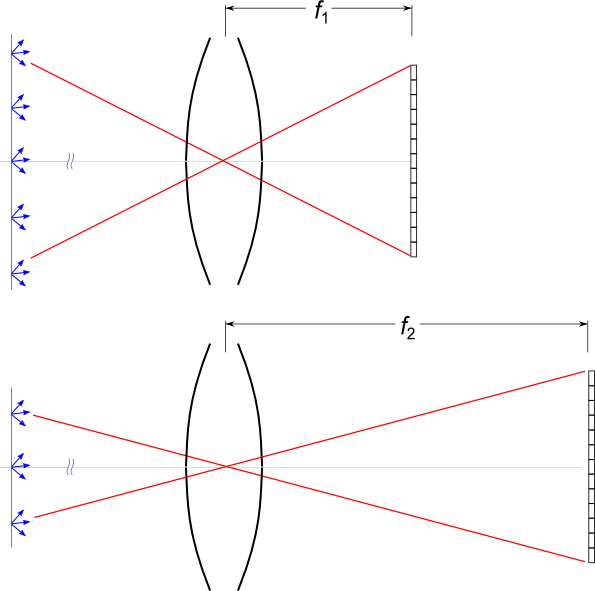 Thus while the lens still collects the same amount of light from each point in the object space, the size of this space is smaller, so the total amount of light reaching the film or detector is reduced.

This reduction is proportional to the increase of the focal length, i.e. the amount of light with the same D is reduced by a factor of (f2/f1)^2. (It is squared because we need to take into account the reduction of the field of view in both directions.)

The last parameter of interest is the frame size. Take a compact camera with the same f-number lens as a full-frame SLR. If the size of both the lens and the sensor are scaled down proportionally to the focal length, the two cameras will have the same field of view. The compact camera will collect less light than the SLR because its lens is smaller. However, it will still give the same exposure value on the sensor because exposure is the amount of light per unit area.

If the two cameras have the same resolution, the exposure will be the same but the actual amount of light on each pixel will be greater with the bigger SLR camera, resulting in lower noise.

Any lens at f/2.8 should deliver the same amount of light to the camera. Certain lenses have to work harder to get there though.

A tele lens, by it's nature is dealing with less light than a wide angle lens. So the harder the lens has to work to avoid loosing light the more glass you need to capture as much light as possible, so you can have a 55-250 f/4-5.6 that weighs about 1 pound and is 6-8 inches, while a 70-200mm f/2.8 weights 6 pounds and is over 12 inches long.

*This is not the way it works from a math point of view, but it may help you with a practical working understanding.

Not the answer you're looking for? Browse other questions tagged aperture focal-length optics or ask your own question.

2
Why are the area of aperture, focal length, and amount of light specified in these terms?
1
Can I estimate the light gathering power of a lens by measuring size of entrance pupil?
4
Is the size of the entrance pupil the same as the size of the effective aperture?
3
Why does illuminance stay the same for a given f-stop even when focal length changes?
0
How is the diameter of a non-circular (effective) aperture actually measured?