How do you take pictures of creatures which may move away when you get close to them?

How do macro pros shoot animals, even flies or dragonflies since they can fly away forever at any moment? I sometimes suspect they have some trick to stun or immobilize them.

Just as an example look at these pictures
http://www.dpreview.com/articles/3852436738/composition-basics-in-macro-photography.
How is that done?

In particular this one http://2.s.img-dpreview.com/files/articles/3852436738/image_7.6_1.jpg?v=1383 is hardly made just waiting. The fly is perfectly on the center of the picture and is even sprayed with water.

There is no magic method that makes it work. There are a combination of factors:

Here is a case of a rather fast flying insect: 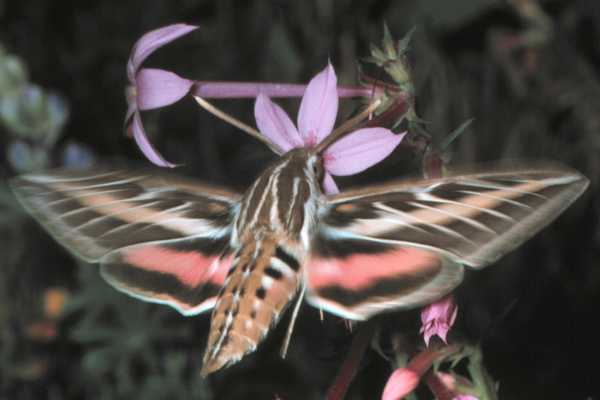 This is Hyles lineata, commonly known as a hummingbird moth or sphynx moth. I saw this moth making the round of a small hillside of scarlet gillia flowers. It didn't mind me following it too much, but didn't stay long enough at a flower for me to set up and focus (all manual back then). Eventually I noticed a pattern it was sortof following. I set up on a flower it was going to get to and waited. Eventually it came and I got a decent shot. No, I'm not going to show you the other 20 shots that didn't work out so well. Although it was mid afternoon, the sky was overcast. I used a flash on a extension cord held by the front of the lens so it would dominate the exposure to get faster effective shutter than the cloudy light and near macro would otherwise allow.

Sometimes, actually most of the time, it doesn't work out that well: 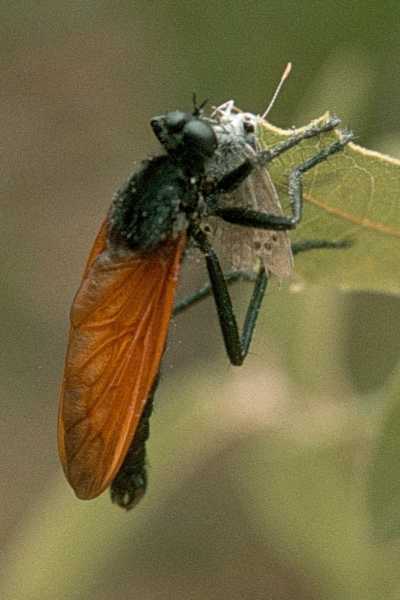 This was one of those better than what I have so far but not really what I want shots. This is a crop from a rather larger frame. You can see the film grain even at only 600 pixels maximum dimension. I still like this shot because it shows a pepsid waspe mimic eating a moth, something the real pepsid wasps don't do. I have been back to this area in Arizona several times trying to get a better shot, but haven't even seen another pepsid wasp mimic since then. I just have to keep telling myself to feel lucky having gotten this.

Be prepared for lots of these: 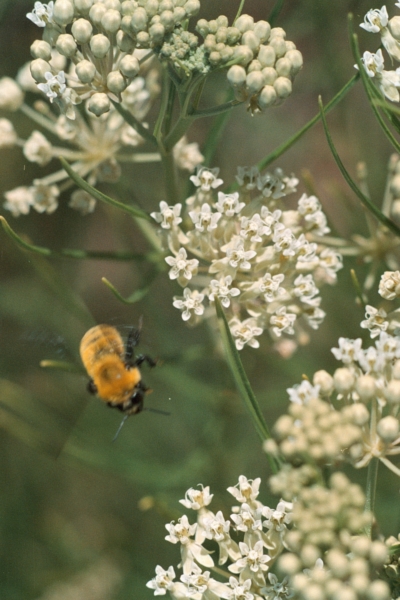 You get set up, in focus, reasonably close to get good resolution, good lighting, framed, and you take the picture. Then between the time the brain says to take the picture, your finger pushes the button, and the camera actually does it, the little bugger buzzes off. Yes, they can do that in a fraction of a second.

However, keep on going. Sometimes everything comes together and you get something you actually like and are willing to show others without pretending someone else took the picture: 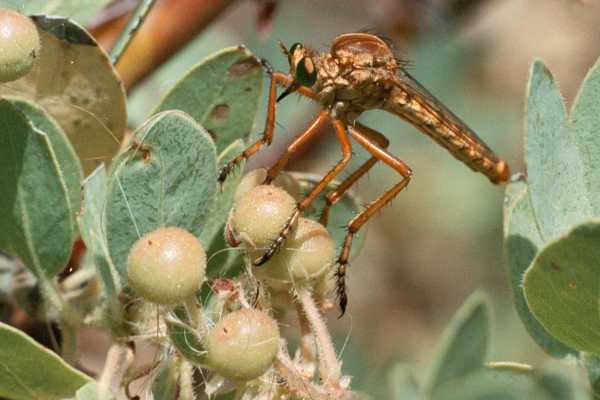 These Diogmites are quite active. Fortunately they aren't bugged too much by photographers as long as you don't get within some magic radius. I found this one minded me less and less as I hung out by the same manzanita bush it was perched in. I don't know, but I'm guessing this was it's inactive period and it didn't want to bother moving too much. After about 30 minutes of it slowly letting me get closer each time before flying off, I could get close enough with a 135mm lens and extension tubes to get a decent picture. If I had been more prepared and willing to spend a few hours there, I could probably have done better. Again, see point #1. As it was, I got caught in one horrendous downpour and thunderstorm before getting back to the car later.

If we are talking about insects in motion, then I know of only one way. Patience.

You set up you camera on a tripod, and pre-focus on a spot where you expect the insect to come, and then trigger the shutter (preferably using a cable release, or remote control) when the subject is where you want it to. That is how I shot this shot (there was a lot of bee activity that day, but always on a different flower than the one I had focused on)

I have since learned that using a flash set to a low power can help freeze the insect in flight, so I am waiting for summer to come to try out that technique.

"Working distance" is an important part of the equation. If you want to focus at 1:1, for example, Nikon's 40mm macro lens needs to be about six inches away from your subject. Keep in mind this distance is measured from the focal plane (where the sensor is, at the back of the camera). So, from the front of the lens you're likely to be only two inches from the insect! No insect will be happy with you getting that close! Nikon's 200mm macro lens, on the other hand, will focus at 1:1 at almost 20 inches away! That makes getting the photo so much easier!

You also need to learn the behavior tendencies of what you're trying to shoot. For insects, for instance, early morning when it's cool will slow them down and they'll be less likely to fly away quickly. Knowing what the animal or insect is likely to do lets you predict where to shoot and when to give you a good chance at a good shot. And after that, it comes down to patience and practice; patience to make sure you're there when the shooting opportunity happens, and practice ot know that when it does, you can get the shot.

Not the answer you're looking for? Browse other questions tagged macro wildlife or ask your own question.

39
What methods do macro photographers use to get so close to butterflies, bees, insects and the like?

3
How can I get the most possible depth of field out of close-up/macro shots?
4
How do I best take pictures of paintings?
0
How can I take professional looking pictures with a macro lens?
7
Is it possible to get a lens that will capture both far away and very close-by objects?
1
How do add on macro smartphone lenses allow you to take macro photos?
3
How to get rid of halo effect when focus stacking with helicon focus?