How do I remove the extra image in this photo?

I have the same image vertical above horizontal in this photograph. The photo was captured with an old film camera, and scanned in using my scanner. How do I remove this extra image? Could I do this in Photoshop? 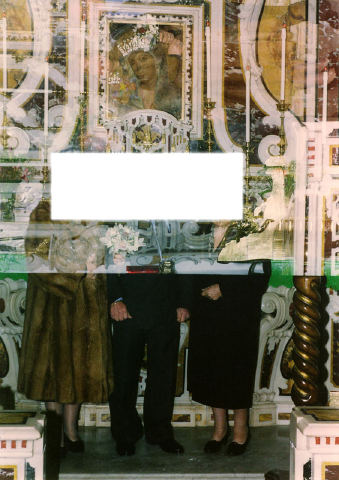 If that's the original image, and you don't have a good copy of either picture you can subtract out, it's going to be incredibly difficult. This sort of thing falls into the extreme end of the restorer/conservator's art, since it means inventing detail.

The upper image is gone for good, likely, but it's not something that's irreplaceable. You can probably buy a postcard that carries more-or-less the same image. Unless it is the only existing image of something that was set up temporarily or destroyed by some catastrophe, I wouldn't worry about it. The picture of the people, below, is probably the more important image of the two by far.

How easy it would be to repair the image is difficult to tell because of the white box—accurately recovering the facial details is the most important part of restoring something like this, whether its value is historic or just family memories. If there's enough facial detail to work with, there is a good chance that the photograph can be satisfactorily recovered. But it will take a lot of work—for an inexperienced restorer, it could be many tens or even hundreds of hours—and a very good eye, along with some artistic ability. And it would help tremendously if there were other photos of the people in that picture to work from. If the basic features are there in the photo, even somewhat obstructed, and there are other references to work from in recreating the features (and, if possible, the architectural details) I'd estimate it to be about a three-day job for me (including "resting time", since it's easy to get carried away if you don't take frequent breaks from an image when you're restoring), and I know what I'm doing.

The latest versions of Photoshop (or a fully-loaded installation of the GIMP, complete with the "content aware fill" module) will make the work a whole lot easier than it might have been even two or three years ago. And trying to do the work with a trackpad or a mouse would be an exercise in frustration—a tablet, and preferably a tablet/monitor combo, should be considered almost compulsory for something like this. In the end there's still going to have to be a lot of hand-work painting in textures, making the eyes believable, and so on. Luckily, you can work on copies and in stages. But it is a long, slow, painstaking process if you want to do it yourself, and it will be very expensive if you use a reputable professional restorer.

That's a corrupt image (unless I'm just really not seeing it right) at the least, possibly a double exposure if you're using film, or a corrupt memory card possibly. Nothing to do to fix it now.
Try formatting the card and see if it happens again, if it does, replace the card.

This is going to be an incredibly hard restoration job, since there's no automatic way of telling which part of the exposure came from the intended image and which part came from the overlaid one.

In the unlikely circumstance that you have an unduplicated version of one of the photos (taken from the exact same place with the exact same lighting), one could attempt to subtract that from the image. But even then, the results would be far from perfect.

Mostly, you have to give it up as lost. Sorry.

Not the answer you're looking for? Browse other questions tagged photoshop multiple-exposure or ask your own question.

7
Can I remove the cable in postprocessing for this photo?
50
What is the best way to remove texture from a scanned textured photo paper?
4
How was this 360° panoramic photo taken?
2
How can I position my marquee from the bottom left of my image?
1
How do I go about fixing this old photograph?
0
How can I create this effect (dreamlike softness)
2
How to show the differences between two images in one combined image in Photoshop?
2
How to properly remove an object that stick out above horizon using Photoshop?
5
How do I fix this washed out photo in Photoshop?
9
How to edit photograph to remove flashes of light / glow / glare?