How can one use a reversing ring with Nikon G lenses?

So, this blog (credit to mattdm for pointing it out) says:

Firstly, when you turn the lens around you obviously lose the CPU connection between the lens and the camera, so say goodbye to autofocus, metering (in most cases) and aperture control (though I’ll come back to that)

The advantage of this old lens is that it has a manual aperture ring, which neatly neutralises the loss of automatic control mentioned above.

So, since G lenses don't have an aperture ring, aperture can't be controlled anyhow if we reverse the lens?

Secondly, is it practical that we set the metering and the aperture (manually) before taking the lens out and reversing it?

Is there any other way to get around this problem in G lenses (assuming that the camera bodies have the manual focus, aperture, metering controls)?

With some non-G lenses, there is a switch on the lens that will release the aperture ring so that you can manually control it, even off camera or reversed, to set the aperture to whatever value you want (but as you close down the aperture, the viewfinder will get dimmer).

With G lenses, there is no aperture ring. There is a mechanical lever though, which closes down the aperture. You can slide that lever and the aperture will close. As the blog points out, you can fix that lever in place with tape or poster tack.

When you reverse the lens, the aperture will close to its smallest opening (f/22 or whatever). Moving that lever can open it back up to the widest aperture, or somewhere inbetween (although very hard to control exactly)

The camera body will not know what aperture is set since it will not have any electrical contact (and will wonder where that lever went!). So best to set exposure to manual and set an appropriate shutter speed. You won't need to set an aperture since the camera can't control it anyway.

There isn't really any point in setting the metering before reversing for a number of reasons:

Get a set of cheap screw Nikon G extension tubes from eBay. The part with the lens mount can be unscrewed from the rest of the tubes and mounted to the lens. This allows you to easily control the aperture, plus should provide a male filter thread that you can screw filters onto. (The set I purchased has a rather unusual 57 mm thread, and while it looks like the standard filter pitch I haven't got any 57 mm filters to test with).

Both solutions allow you to set the aperture using the adapter. Note that no f-stops are marked on the adapters, and it will vary between lenses. If you only plan to use the adapter with a single lens you could run some tests and mark the f-stops on the adapter yourself.

Also note that with a weather sealed lens you may need to remove the rubber ring from the rear of the lens to mount an adapter. 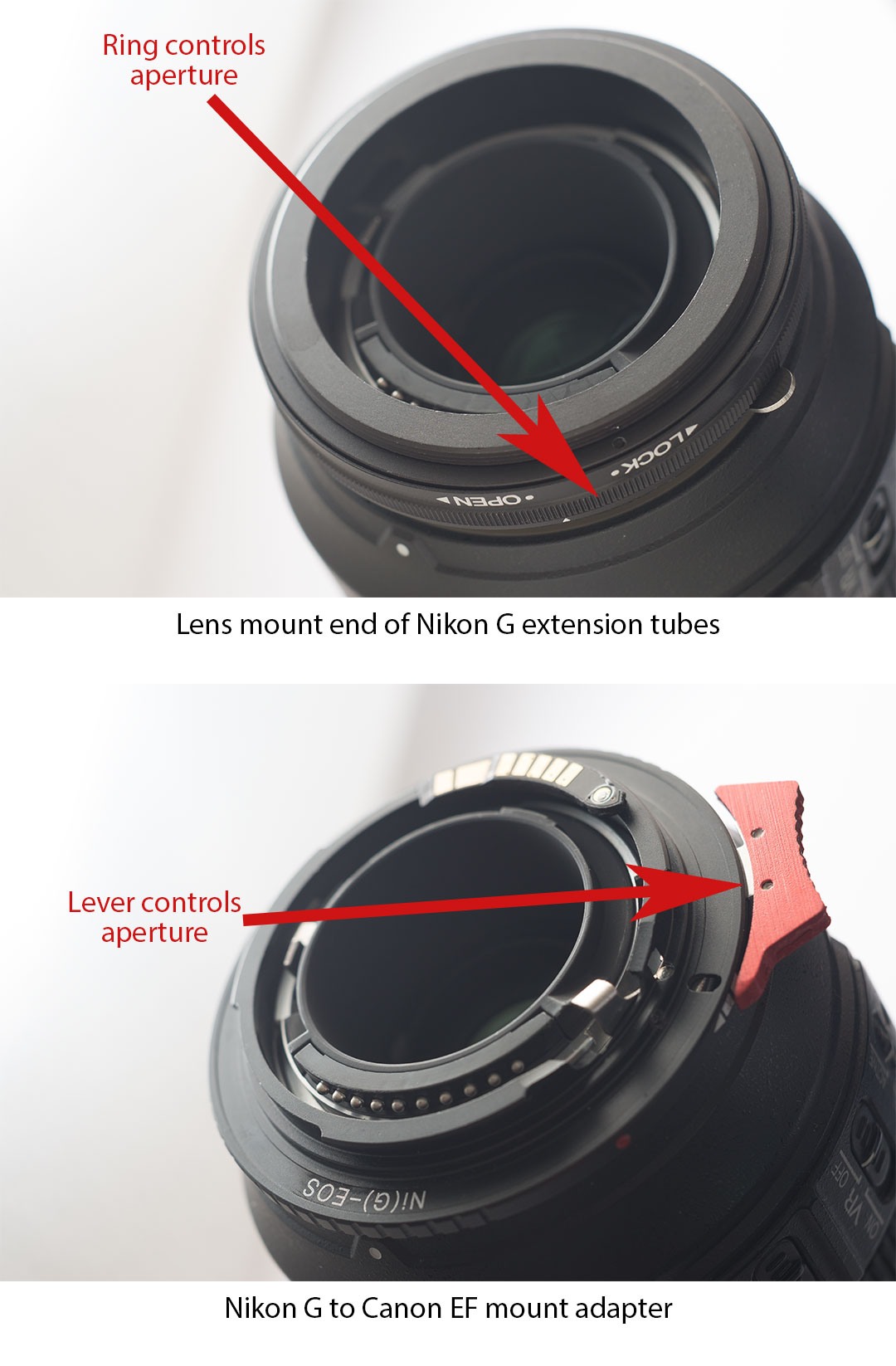 Fotodiox makes a Nikon F mount –to– 52mm adapter with aperture control (or at least, made. I cannot find it on fotodioxpro.com, only on Amazon.com). 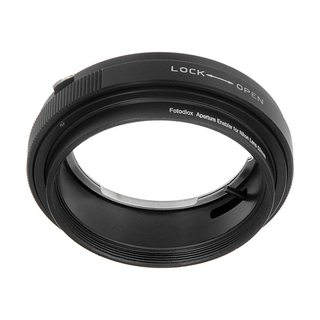 This adapter mounts to the bayonet mount of a reversed Nikon lens (including G lenses) to provide aperture control of the lens, as well as a 52mm filter mount (to mount a clear UV filter if you wish to protect the lens's rear element, or a 52mm lens cap to cover it).

Full disclosure: I own this adapter. It works as intended. I don't personally need the aperture control (I use it on an older 58mm ƒ/1.2 AI-S lens that has an aperture control ring), but I have tested it on G lenses. Mostly I wanted it so that I could put a high quality clear filter over the rear of the lens for shooting in a dusty workshop.

Not the answer you're looking for? Browse other questions tagged lens nikon prime reverse-mount or ask your own question.

2
How do I control aperture with lens reversal for macro?
5
Can my Nikkor 35mm f1.8 be used as a macro lens, with reversing ring?
4
What do I need for reversed-lens macro photography with an entry-level Nikon DSLR?
0
How to properly focus using a Macro reverse ring?

6
How do I get the d3000's electronic rangefinder to display when I use an AI lens?
5
Why is my new reverse-macro mount adapter not working?
2
How to decide which reversing ring is suitable for a lens?
5
Can my Nikkor 35mm f1.8 be used as a macro lens, with reversing ring?
2
Why no aperture control with Nikon 55mm f/2.8 AI-s on Nikon D3200
1
TTL seems not to work on D7000 with sigma ring flash for dental photography
2
Manual lens on analog EOS camera, metering problem. (Samyang 85mm f/1.4 on Canon EOS 650)
0
How do I find a cheap prime wide lens (28mm) to use reversed on a Canon DSLR?