How to photograph chocolate?

I have often marveled (and gotten hungry) at the beautiful pictures in the blog Smitten Kitchen. It documents mostly baking recipe, and chocolate spreads, ganaches, and pure molten chocolate are often present. On the the blogger's pictures, it looks glossy, shiny and yummy. It is smooth, but has a discernible texture caused by the pouring/spreading. See for example this chocolate peanut butter cake post, and the chocolate stout cake post.

The only time I tried to photograph chocolate, I ended up with 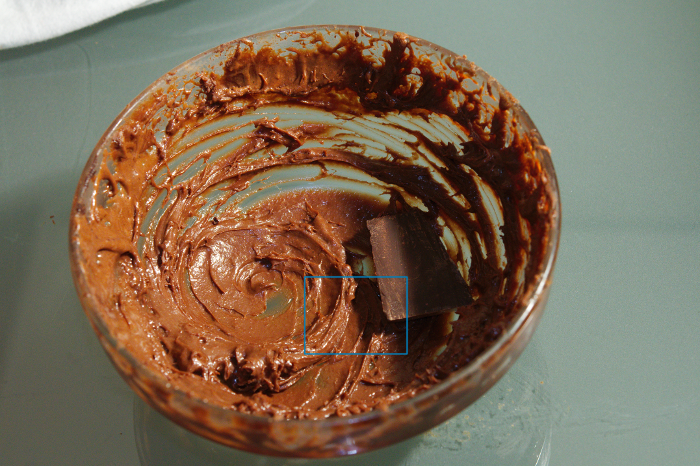 Note that it had looked just like hers in my kitchen (this is very dark chocolate, probably 85%). I also made sure that the white balance is more or less correct (that's what the white t-shirt in the corner was for). The color is still unappealing, and the surface looks terrible. (I am aware that the composition and the smearing of the chocolate on the glass bowl are a bad idea, but assume that I will avoid them next time).

How could I have made it silky-smooth and mouthwatering instead?

Let's start with the obvious, which you already know: Smitten Kitchen's photos firstly look good because they show off good food. Your photo looks unappealing because it's a pile of chocolate smeared in a bowl. Presentation is such an important part to making food look good -- if you can make it look good to eat in real life, then you at least have the opportunity to take a good photo of it.

Shooting into the bowl creates a technical problem that your photo shows off: the bowl is deep and harder to light evenly. This was a problem for Smitten Kitchen, too: both of the linked recipes have photos of bowls in them, but notice how they're different from your shot: she got closer to the bowls so that they can be more evenly lit and she positioned the camera so that you are less likely to notice the difference. Also notice the content of the bowl: yours is swirled and showing all sorts of highlights; hers is smooth and flowing.

"Get closer" is a great mantra. Somebody famous said "if it's not interesting, you're not close enough." Get closer. Crop out the table top. Put that chocolate up-front, perhaps larger-than-life. As you noted, this is how you found the smooth but noticeable texture of the chocolate.

How are you lighting this? I would start by setting a softbox directly over the bowl to light it, which would give some soft diffused light. It occurs to me that having the white balance ever so slightly warm could make this more enticing; I'd note it for later because I always fiddle with white balance in post.

Putting it on a surface (like a cake) would be a start. That bowl is doing you no favors - it's casting shadows on half of it, and acting like a parabolic mirror to reflect glare off the surfaces, which is why it looks so bright.

I'd suggest a lower angle of view, with more diffuse light above and behind the subject. Light from the side (or behind) will bring out the texture more. Diffuse light will result in softer, creamier look to the surface, rather than harsh highlights.

You've already gotten some advice about how to change the shooting. I'd note, however, that you can probably improve things at least a little bit just by adjusting your processing a bit. In this case, you've adjusted the white balance, but most of the chocolate is just way too bright. It takes only a minor adjustment to at least make it look something like chocolate instead of almost like some sort of strange caramel: 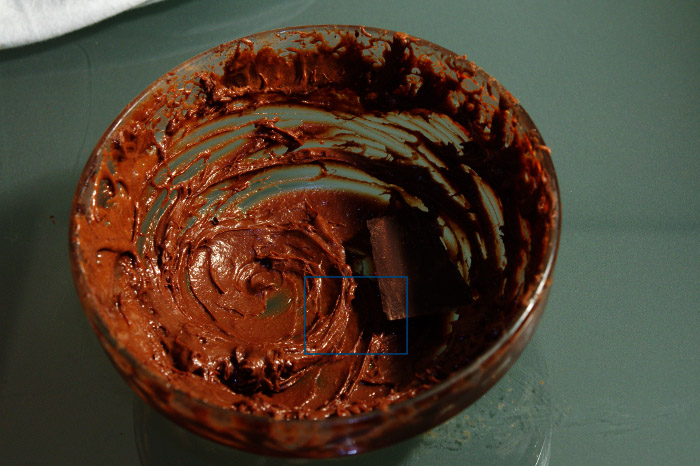 Now, it's certainly true that the uneven lighting makes it hard to get this even close to what you probably want. Right now, the left side (toward the rim of the bowl in particular) is still pretty light colored, but the right side (in the shadow) is so dark we can no longer see any detail. Obviously, you need much more even lighting.

Also note that darkening the chocolate makes the highlights (e.g., bottom of the bowl, left of center) stand out quite a bit more. This is a large part of what makes us perceive something as smooth and shiny. Something that's "soft" or "fuzzy" will generally have highlights that are very muted and spread out. A smoother, shinier surface will generally show highlights that are somewhat smaller and much more clearly delineated.

Assuming this is closer to what you're hoping for, the mechanics of it are pretty simple. For this exercise, I used Photoshop. Its "Levels" dialog" started out looking like this: 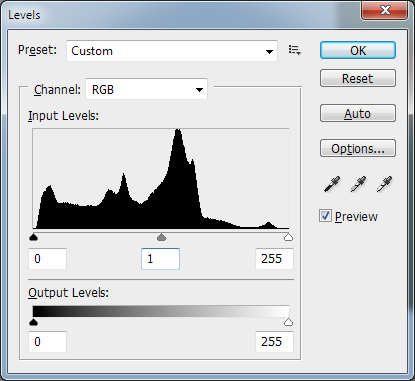 I adjusted that to this: 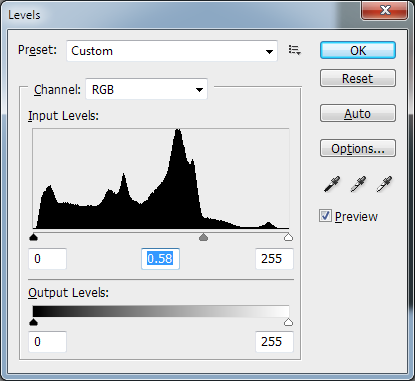 That's it -- nothing else involved at all (in this particular case). Of course, I'm only taking a wild guess at how dark the chocolate really is, but at 85%, I'd guess this is at least a lot closer. If anything it's probably even darker than I've placed it, but it's hard to guess exactly how much darker it might really be. Like I said earlier though, at least this way it does look like chocolate...

I don't have any experience photographing chocolate but there are several thing that just jump at me from the pictures on Smitten Kitchen.

Add some butter when melting the chocolate and melt it very slowly above boiling water and that will make it more liquid. For colour use darker chocolate with higher amounts of cacao.