How can I improve my exposure in low-light situations? 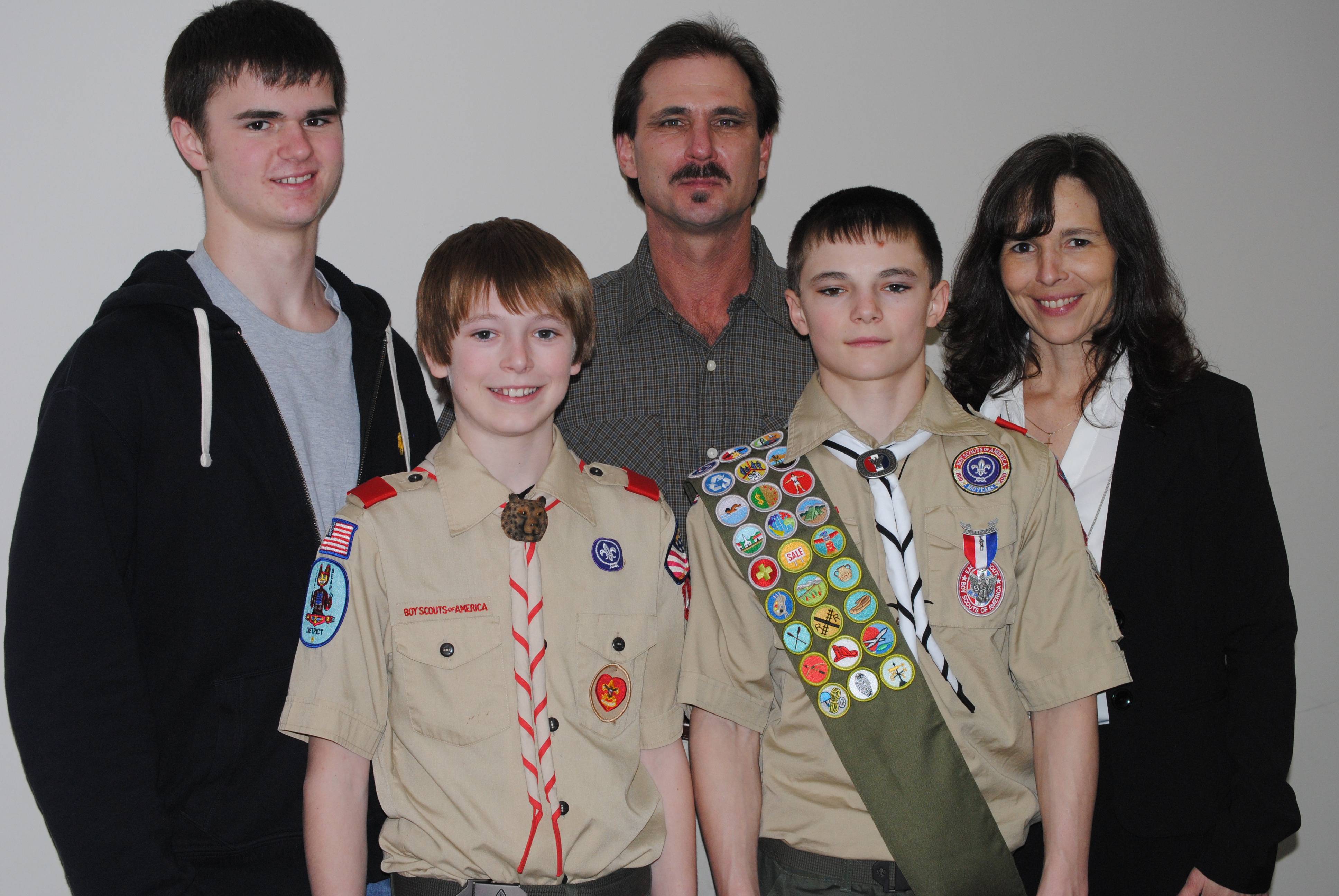 I am new to photography and have been struggling with low light scenarios. I have a Nikon D3100 and an SB-900 flash. Regardless of my ISO, aperture, or shutter speed settings, when I am photographing inside a church (common setting for me as we hold scouting events there), my pictures are just not as exposed and briliant as I want them to be.

I just purchased the Nikon 35mm f/1.8 lens hoping this will help with indoor low light shots. I like to do portrait shots as well.

Any suggestions on settings I should use? Should I use it indoors in low light with my SB-900 flash, point the flash angled toward the ceiling? Bump up ISO to 200-400?

Attached are a couple pictures from inside the church I usually shoot at for our Eagle Scout ceremonies... 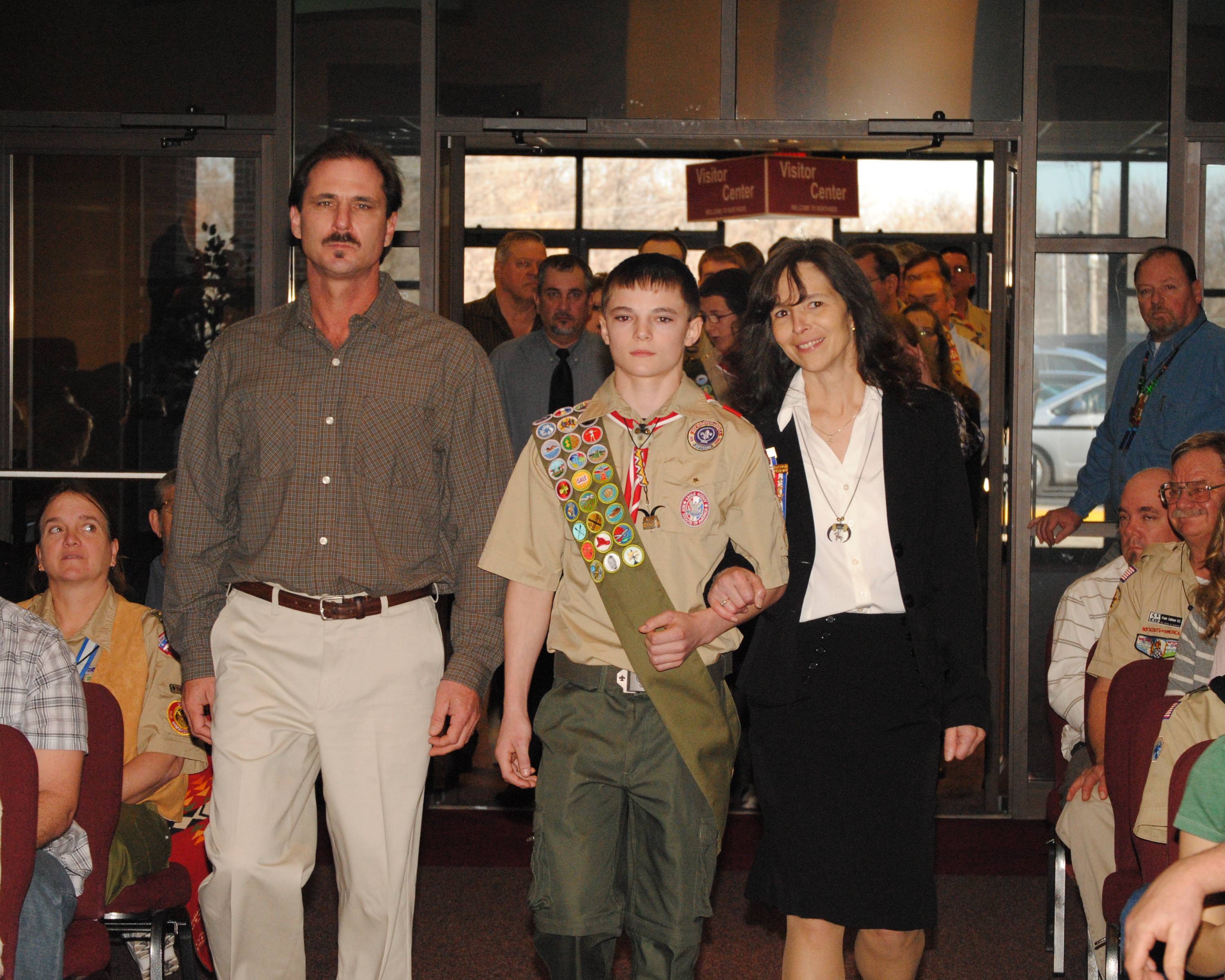 I would see how far you can go with ambient light first, then add some flash as fill

This may get you there. If so you can possibly use slightly lower ISO or faster shutter.

Then I'd start to think about flash, especially if ISO 800 and 1/15th aren't quite enough (or subjects are moving and you can't go that slow). If you have done the above and ambient light is almost enough, then you just need some fill flash.

Flash will fill in some shadows and help freeze the action that might otherwise blur from your slow shutter speed. Once you've added in flash, you can think about moving ISO back down to 200-400, or if subjects are moving, you might want to move shutter speed up to 1/60 or faster.

Edit: having seen your sample image, it's not that underexposed. Judging by the people on the sides and background, who wouldn't be lit much by the flash, there is enough ambient light around. Just dial down the flash a bit if it's too harsh.

I'd suggest you get them to move together a bit, and you can crouch down. Those two things will eliminate all those heads in the background.

I think, looking at the sample images, that working at a wide open aperture like f/1.8 is asking for trouble. Both groups were spaced out front to back, with the group in the first image in two rows, the second in at least three rows.

Remember, depth-of-field is a function of your aperture. You can experiment with your settings or try an Depth of Field Calculator for a better idea. Here's the deal: If you are standing 10 feet away, at f/1.8, you will have a depth-of-field of less than a foot. Think about it this way: If you autofocus and it nails the exposure on somebody's nose, the last thing that will be in focus will be the back of their head. The next row of people will be out of focus. The closer in you move, the shallower your DOF will be.

So I think using a super wide aperture on a group is unlikely to provide the results you want. If you stop the lens down to f/8 (again assuming you are about 10 feet away), and focus on something about 1/3 of the way behind the frontmost subject, you can increase your DOF to a bit over 3 feet. The point are these:

In terms of the shutter speed you use, there is a hackneyed phrase that goes something like "the chances of getting shot where a person didn't blink is inversely proportional to the square of the number of people in the shot". Really, you will have to toss a lot of images because of focus issues even if you use a small aperture like f/8 or f/16 -- but opening up much more is tempting fate.

See what you can do with your SB900s to spread the light around. Set your camera on M and choose 1/250th at f/8. SB900s are pretty capable. See what happens.

Well, first off, I would bump ISO much more. When it comes to ISO, there are trade-offs, however one of the worst ones to make is not bumping it up enough! Exposure is a factor of three primary variables, and ISO is just as important as the other two (shutter and aperture.) The consequences of not using enough ISO quite often result in a noisier photo, as you usually have to increase exposure using post-processing, which can enhance noise more than boosting ISO.

You should always aim to expose correctly, regardless of what settings you need to adjust to do so. Generally speaking, you should aim to get as much light down the lens as you can. Increased ambient lighting, flash, opening windows/doors to let in more natural light, etc. can all assist in that endeavor. Sometimes its just not possible to produce enough light, or light of the necessary quality and angles. If you are shooting indoors, don't have an ultra fast lens (i.e. f/2.8 is your maximum aperture) but need one, need to use a narrower aperture than is ideal for deeper DOF, have to use a longer shutter speed to minimize motion blur or camera shake, etc., then increase ISO. You'll generally see some increased noise, simply as a matter of the physical properties of light. But the alternative is to underexpose your photos, which diminishes saturation and contrast, and ultimately leads to higher noise in an exposure-corrected image (sometimes a LOT higher.)

Use ISO 200, 400, 1600 or even 6400 if you have the option, if thats what it takes to get a correct exposure in-camera. If you can, try to expose to the right (ETTR), a technique where you shift the in-camera histogram of your photos as far to the right as you can to maximize the amount of light captured. When using ETTR, make certain you are not clipping your highlights (most modern digital cameras have an option to blink clipped highlights when previewing images). You can correct any overexposure down in post-processing, which can often reduce the amount of visible noise that may be caused by a higher ISO.

The exposure looks right on your example. If you have a problem, I think its probably that its a little 'flat'. Your image lacks depth either through significant subject isolation or better lighting.

It looks like your flash was aimed directed at the subject. You effectively filled in all the shadows and filled in took much. If your ceilings are low enough, try 'bouncing' the flash. If they're not, I'd either look into some off-camera flash gear or go without the flash.

You obviously intended the subjects to be the people, but you have a rather busy background. Try a lower f-stop number (larger aperture) to blur the background more and just capture your subject better. There are times for environmental portraits - this doesn't look like one of them.

Not the answer you're looking for? Browse other questions tagged nikon exposure low-light or ask your own question.

5
Why am I getting a slow shutter speed with Child mode on Nikon D3100?
6
Nikon Coolpix P510 - Recommended low-light settings?
3
Can ISO vary on different cameras?
6
How much additional light does an f2.8 really let in?
1
How can I better take indoor photographs with wide aperture and low light?
6
How can I improve portraits when shooting in low light without flash?
3
What causes this weird angled glowing blur around lights on my low light shots?
3
How can I take better pictures in an indoor pool?
0
Nikon D300s, Tamron 70-200 2.8 lens, Suggestions for low light settings for Gymnastics and HS soccer,