What kind of camera do I need to capture deep space images?

By deep space image, I mean below kind. In the background it is space dust, I think.
Is it dependent on camera or location? If on camera, what kind of cameras are capable to capture this kind of images? 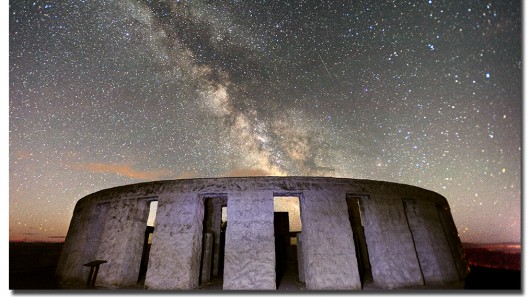 I found this page while checking my stats on Flickr. (I'm the photographer that shot this photo) I thought I'd respond with details of how I created this image since I see multiple theories here.

Also, the background is indeed the Milky way as some of the answers mention. (This was shot when the moon was just rising - so the skies were still dark)

The D700 is an example of a camera that has very low noise at high ISO - thus, the image works even at full-resolution (12.1 MP). There are ways to achieve even lower noise (downsampling, dark-frame subtraction etc..), but I didn't do any of that for this image.

The most important part of getting an image like this is to find an area with dark skies. (More images with Milky way can be found here: http://www.flickr.com/photos/bala_/tags/nightsky/)

If anyone has additional questions, I'm happy to answer them!

Unfortunately, a lot of images like the one you show here are digitally altered and it is difficult to get comparable results. The image above shows the Milky Way, looking approximately at its center, which appears to us to be in the constellation of Sagittarius.

To get such a detailed view of the comparatively dark nebulous structures, however, you need to use really long exposure times. Unfortunately, because of the stars' apparent rotation, exposures above approximately 25 seconds (for wide angle lenses; the smaller your lens angle, the shorter the time) begin to show star trails. So I doubt that the image you show was really created as one exposure. If so, the photographer must have used an extremely low-noise semsor with exceptionally high sensitivity.

The linked "star trail" image (which shows the telescope I work for, by the way) used a technique called "stacking". To create it, 70 1-minute-exposures were added together. This is a common method that allows you to get very good images using a normal DSLR and an external timer/trigger.

If you stack the images so that the star "pinpoints" are on top of each other, you will get a detailed skyscape with blurred foreground. This is what I suppose was done in your example image: The sky was images with a series of exposures, stacked together for greater sensitivity, and the foreground has likely been added afterwards.

Of course, instead of doing that much digital manipulation, you can also follow the traditional route and mount your (D)SLR on a tracking mount. A good description with sample images that show what to expect from real-world exposures is given on the "bedfordnights" Geocities page (link to archived copy at Internet Archive).

Edit: I forgot to address your question regarding location. Yes, it depends on the location: For one thing, the center of the milky way (which is its brightest area) gets higher above the horizon when you move from the poles to the equator. But most importantly, images of the quality you show above are only possible from the darkest locations on the planet (which sounds exotic and adventurous, but essentially means "anywhere where there are no human settlements causing light pollution in about 200 km radius").

Not the answer you're looking for? Browse other questions tagged astrophotography camera-recommendation stars milky-way or ask your own question.

37
How to have colors in Milky-way?
26
How does Peter Lik manage to capture the stars in such detail in the following photograph?
18
What's the best technique and kit for taking a picture of the Milky Way in a nearly pitch black landscape?
9
Why milky way galaxy cannot be seen by human eye while by camera?
5
How do I choose a telescope for space and planets photography?
10
How to shoot stars much bigger without trails?

14
Capturing the Milky Way: what did I do wrong?
4
What camera equipment do I need for deep space photography?
12
What causes faint circles in astrophotography images?
9
What lens characteristics are important in star photography?
6
How do I choose a lens to photograph the Milky Way?
1
If I wanted to compare image's RGB pixelation values of the same object taken with differing cameras, what discrepancies might I run into to?
2
What is this random white dot in only one photo of Eagle Nebula stack?
2
What camera features do I need to take a clear picture of NEOWISE?
1
How (the heck) did NASA photographer Joel Kowsky take this amazing photograph of the International Space Station transiting the Sun?