How to take photos of large groups (over 100 people)?

I recently had been called to take a photo of a 100+ group. The photos were taken inside with some bright lighting. Subjects were sitting in 4 rows of a choir seats. There were fluorescent and flood light overhead. I also brought three flashes with me and set two on the sides pointed upwards into white ceiling and one on the camera body.

I was using Nikon D90 with 18-200mm Nikon lens. The pictures were taken at 22mm. This was my first time taking pictures of such large group. I never done anything more than 40 people in one shot. Basically the pictures came out really bad. The focus on the sides of the photo is just awful. The color of the photo is ok, but could be better.

In my defense I had no time to prepare. The friend called me late evening to take pictures next morning. Anyway, my question is what could I have done better in this situation? How does one take pictures of such large groups? 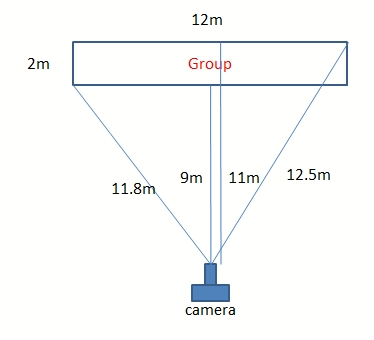 At f=18mm you need to be 9 meters away - calculated on this: http://www.tawbaware.com/maxlyons/calc.htm

Here you can compute you DOF at a certain distance and focal length for your camera:

It turns out that you have the hyperfocal distance in this case - even if your lens has a magical F/1 (but you probably have more like 3.5 max aperture) you are looking at a 5meter deep DOF. Even if you went further away and zoomed in a bit (e.g. 35mm) you would still be looking at a much deeper DOF than you need.

This concludes that you are not having any DOF issues. It is just your lens that is only sharp in the center, especially if you shot it "wide open" at F/3.5-5 so you should find a nice prime instead that's sharp across the frame at F/4.

You may be reaching the limits of your equipment. A 18-200mm lens is not a lens known for edge sharpness at that focal length.

I would use a prime lens, probably a 35 mm lens for edge sharpness. Wider lenses are usually less sharp in the corners. On a cropped-frame camera, you will still need to back up quite a bit.

You will need a great deal of light to light the subjects at the appropriate depth of field and ISO. I would not use f/18 as recommended by another respondent. The diffraction at that depth of field will lead to a less than sharp photo. Optimal aperture might be f/11. For maximum sharpness, you probably want to keep your ISO at or below 200. Even with a lot of lighting, your additional challenges will be evenness of lighting and dealing with shadows. For consistent color temperature, needed to avoid color casts that can't be eliminated, you will want to have enough light to overpower the ambient (including artificial) light in the room.

Your objective is not an easy one. I recommend lowering your client's expectations or gathering the gear and experience to get the results you would like.

Update: You will need strobes to provide the light to which I was referring. You will want to shoot RAW for maximum sharpness and to control any noise correction, and will want to turn off any "auto enhancements," such as one to extend highlight range, since some of those occur at the expense of sharpness. Finally, expect to do some work in post to even the lighting possibly and to sharpen.

Without seeing the image that you speak of, I would guess that at least part of your problem is that you simply did not have enough light output to achieve a greater depth of field, and thus not all subjects were in focus. It is also possible that the corners or edges of your 18-200mm lens are softer then the center, and the subjects at 22mm were either distorted or not as sharp as the center subjects.

Another item that comes to mind is how high was your ceiling? You will lose flash output power if you are bouncing it off something like a ceiling, especially if it is a fairly tall ceiling.

This previous question might help you to study one type of photography "Banquet Photo" - What is a banquet photo?

Control the shutter depending on light.

As for the image blur, make sure your lens optica are clean and stay away from the end rage of a lens as these focal lenghts can distort images. You were right to step up to 22mm instead of sticking on 18, perhaps go a bit further.

As others have said, you probably discovered the limits of your 18-200mm Nikon lens in terms of edge sharpness.

It's hard for any lens to maintain sharpness all the way to the edges and corners when used at the widest aperture. It's even harder when it is a zoom lens. It's harder than that when it is a zoom lens with a focal length range of 18-200mm! The best zoom lenses rarely exceed a 3:1 ratio from longest to widest focal length. Many prime lenses will equal or even exceed the corner and edge sharpness of those premium zooms at 1/5 the price or less. Pretty much any lens is sharper stopped down a stop or two that when used wide open.

When shooting large groups in marginal light camera stability is a major factor. If you use a tripod, a cable release, and mirror lockup it will allow you to use slower shutter times than would otherwise be the case. Because each person in the frame is such a small percentage of the total frame, the same movement that would be very noticeable blur in a tight head shot of a single individual is not detectable in a group of 100. The angular size of each person's head in a group of 100 can be smaller than the pupil of an eye in a solo headshot! Thus if the camera is stable, vibration free, and contributes no blur to the entire frame then the size of your subjects means they probably won't either.

It's not exactly a family reunion, but it is a group of around 100 people. They're standing to recognize applause at the end of a judged musical performance. The students are not necessarily aware that they're also posing for a photo! The reason a zoom lens was used was due to the fact I shot 33 groups over a two day period that ranged in size from 25-30 to over 100. The zoom lens allowed me the flexibility to frame each group optimally from the fixed shooting position. Due to the fact that it wasn't a "posed" shot I took several successive frames of each group and used the one in which the group looked best overall.

Shot from the elevated projection booth at the rear of a 1,500 seat auditorium with the existing stage lighting which wasn't very bright. Tripod mounted Canon EOS 5D Mark II with EF 24-70mm f/2.8 L @ 60mm. ISO 500, f/3.5, 1/80 second. Mirror lockup and wired cable release. Manually pre-focused on a point 1/3 of the way between the front and back of stage using magnified Live View. 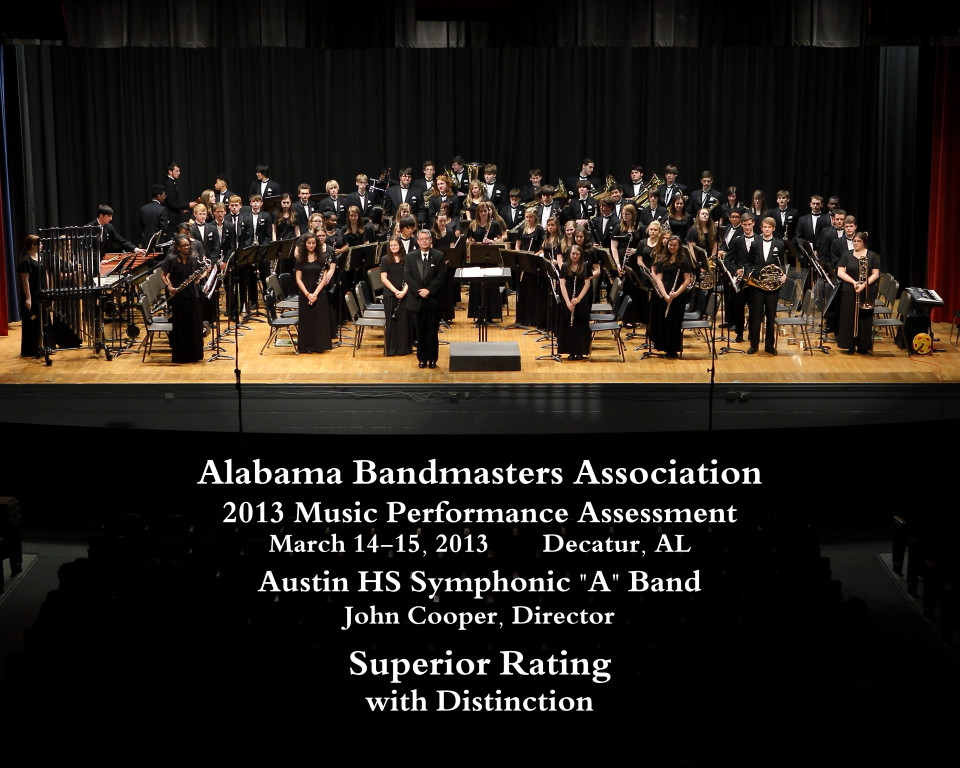 Not the answer you're looking for? Browse other questions tagged lighting wide-angle group-photos or ask your own question.

2
What equipment/ Which settings required for a 400 person group photo?
8
What is a banquet photo?
3
How can I light a large group photo at night outside on a stage?

35
How to white-balance photos shot in mixed-lighting environments?
12
How do they shoot wide television-show cast photos?
14
How to pose and arrange people in a group shot?
7
How to best take a group photo with very large differences on height?
0
How do I prepare for my first event shoot (large corporate gathering) tomorrow?
2
How do I light a large group of people in low light (inside a temple)?
17
How can I best take photos of people in front of a Christmas tree using only available lighting?
9
Best ways of photographing at a concert/festival
7
How to compose photo with un-posed groups with four or more people?
3
How can I light a large group photo at night outside on a stage?