I'm curious if very short exposure times (say 1/8000 or even 1/16000) would cause noticeable blur due to diffraction.

To achieve very fast shutter speeds focal-plane shutters start to close the second curtain before the first one has passed completely over the sensor.

Is the slit between the front and the rear curtain small enough to make a noticeable impact on the image due to diffraction?

Slits don't diffract; edges do. There will always be some small amount of the image exposure that arises as the result of diffraction, whether that be from a focal plane shutter or from a leaf shutter. The questions, then, are: how much of a contribution to the overall exposure does diffracted light make; and is there enough angular displacement for that diffraction to matter?

On an APS-C format camera with a 16mm x 24mm sensor and a vertically-travelling focal plane shutter whose curtains traverse the sensor in 1/250s (yielding an expected x-sync speed of 1/200s, allowing for flash duration), when the shutter speed is set to 1/8000s, the minimum gap between curtains will be 0.5mm, which is relatively enormous compared to the wavelengths of the light passing between the curtains. There will be some diffraction, of course, but the degree of interference over most of the slit width will be negligible. The "clear" exposure, the area over which the effects of reinforcement and cancellation have an insignificant effect on the overall magnitude of the incident light, will significantly outweigh the diffraction fringes around the edges of the curtains.

Focal plane shutters, too, are called that because they are very near the focal plane. There isn't a whole lot of room between the shutter curtains and the sensor (or film). The areas of the diffracted light that have significant reinforcement will not be displaced laterally very far, given that they don't have a lot of room to spread out and get comfortable. The distance between sensels on the sensor is much smaller than the width of the shutter slit, being around 7 microns these days, but that is still large relative to the wavelength of light -- light would need to spread out quite a bit before the first few bands of reinforced light (the ones having enough amplitude to affect the overall exposure) started to impinge significantly on neighboring sensels.

I know this is an old question, but just wanted to contribute a photo that exhibits a shutter-induced diffraction effect. My Nikon 1 V2 camera has both a mechanical shutter and an electronic one. When using the mechanical shutter at high speeds and there is a brilliant specular highlight in the frame, I see vertical rays of flare coming off the highlight. 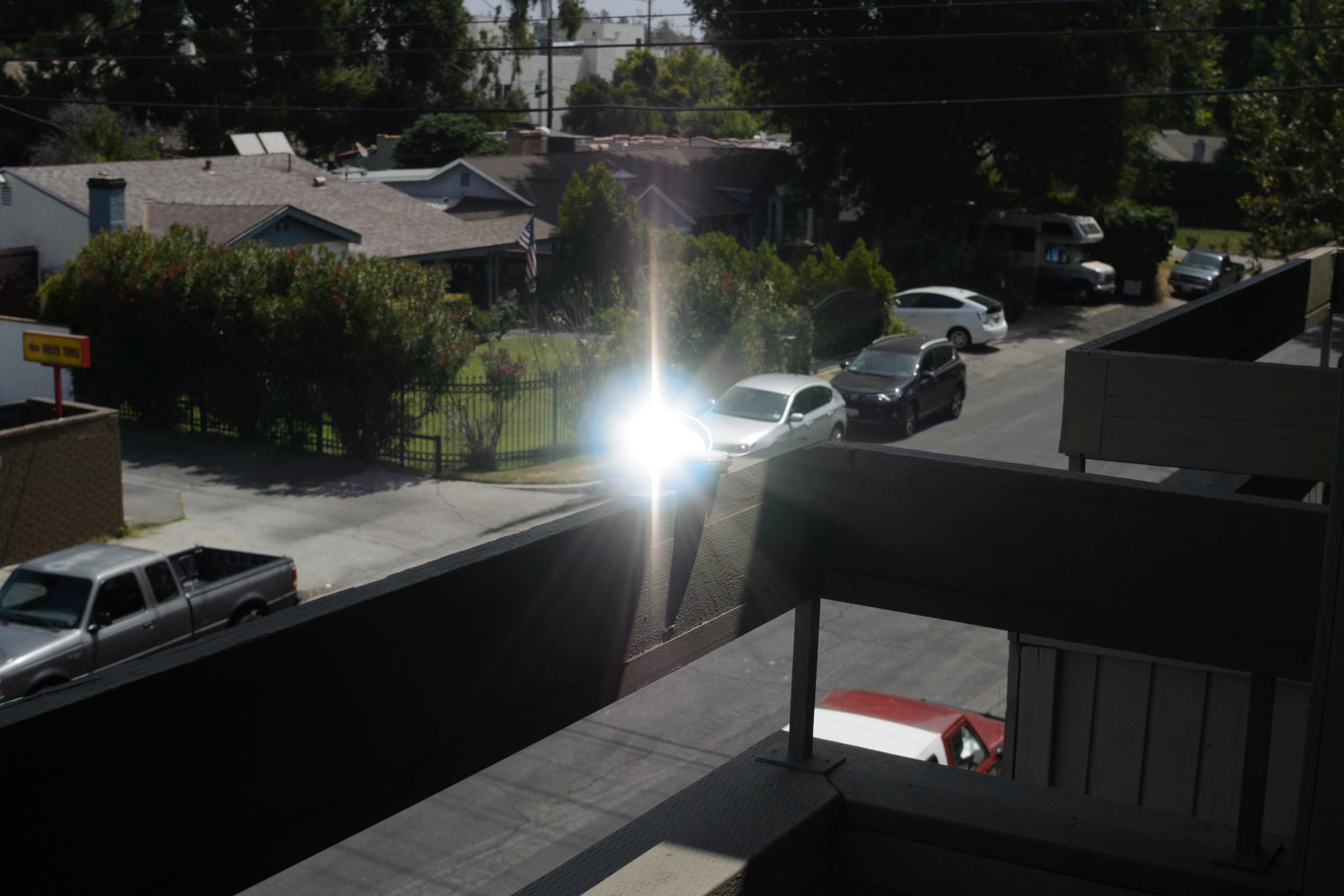 At the same settings but using the electronic shutter, no vertical flare, just the radial flare common to both images: 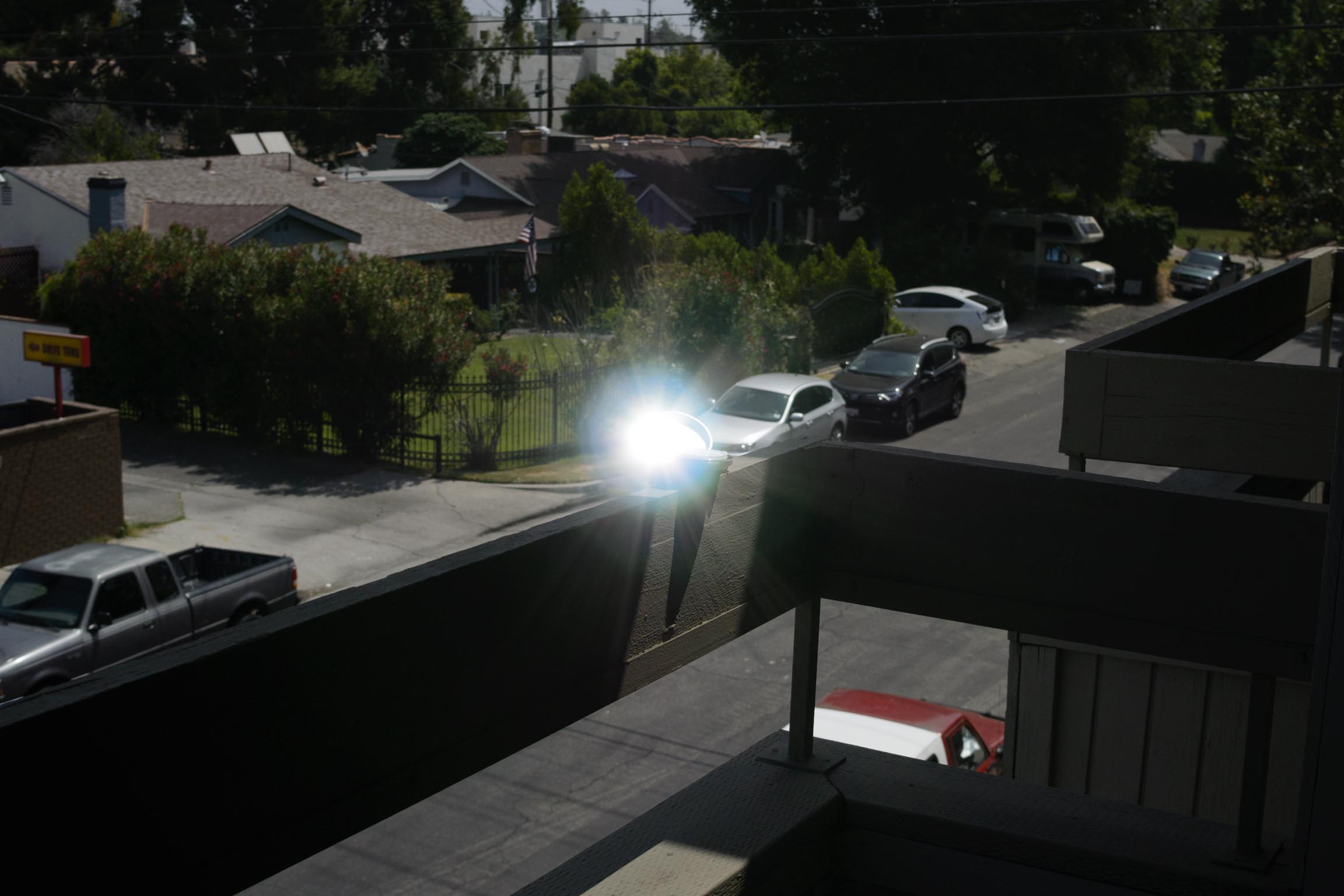 I do also see some possible evidence of a softening effect due to this diffraction in the first image, where some features look a little blurrier than in the second image. But I'm not sure if that's real.

While diffraction would occur along the edge of the shutter, the distance to the sensor is so small from the back side of the focal-plane shutter that it would be unlikely to cause any noticeable diffraction.

Remember that diffraction over the area of more than 1 sensor pixel only occurs because there is sufficient distance for the wavelets produced by a tiny aperture in the lens to expand outward before hitting the sensor.

Saw a discussion on this elsewhere. One expert said that diffraction with 1/8000 would correspond to f/11, which could already be clearly visible with certain cameras. 1/4000 and f/5 would not be.

Not the answer you're looking for? Browse other questions tagged shutter-speed diffraction or ask your own question.

2
Are there downsides to using a high shutter speed when it's not required?
0
Why does the electronic shutter prone to diffraction?

3
Does increased resolution compensate for diffraction?
15
Where do non-standard shutter speeds come from?
6
What camera settings esp. shutter speeds to use while driving?
11
Is there no crossover point where shutter speed overtakes flash duration?
1
How can I shoot in a semi-dark room without very long shutter speeds?
13
At what shutter speeds is mirror lock-up worthwhile?
0
Why does the electronic shutter prone to diffraction?