What is the next step up from the Canon T2i?

I had a Canon T2i that is damaged and so I'm in the market for a new camera. I really enjoyed the T2i and so I am considering getting another one.

From using snapsort.com to compare the T2i with a few other cameras I have not come to any definitive answers.

I am not really impressed with the flip out screen on the T3i (which seems to be mainly the only difference), and in other features the T2i still seems to be a better camera: 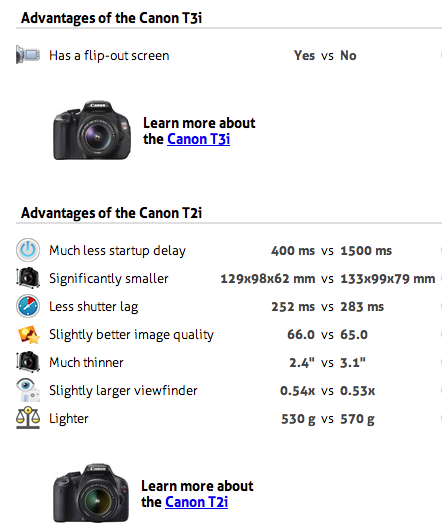 I borrowed a 7D for a weekend and played with it. At around $1400 I think price-wise it is a decent step up, but for features I'm not so sure. (Snapsort Comparison). I liked that the 7D is weather sealed, and I like that it has the LCD on top and extra buttons to give me quicker access to more of the advanced features. I did not like that it had a Compact Flash card - seems outdated, and otherwise the features are not really that much better than the T2i: 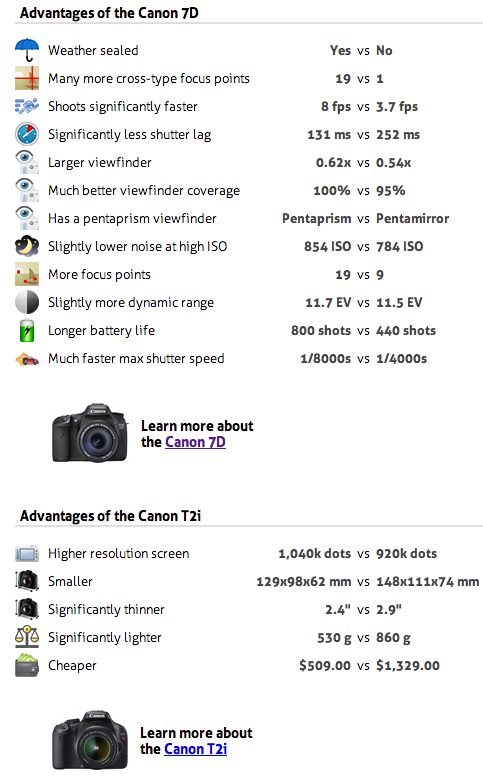 If I compare what you get with the 7D for $1400 with what you get with Nikon's D7000 which is $1499 it just blows me away. I mean I don't really want to switch from Canon to Nikon but it seems like you get a hell of a lot more for the same price. 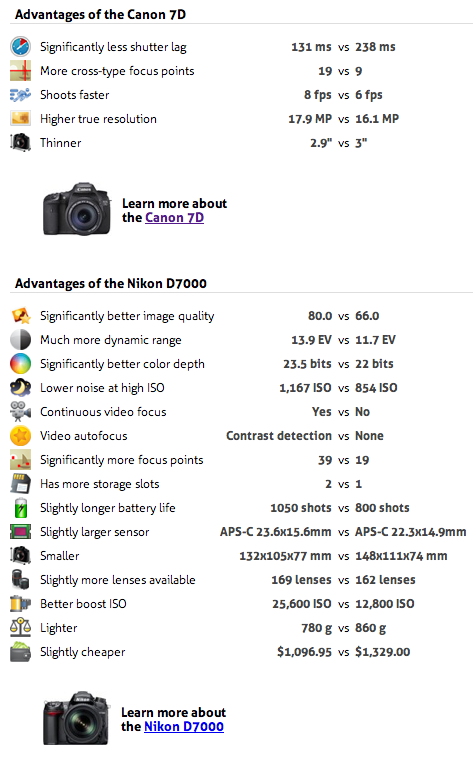 So what is the next step up from the Canon T2i?

Raw numerical stats don't tell the whole picture. The differences between the 7D and the D7000 are a lot less than they may seem from the comparisons you posted. Here is a basic analysis of the listed benefits of the D7000 over the 7D:

The rest of the factors are pretty minor...price is highly subjective and time dependent (I picked up my 7D brand new for $1300 on Amazon, where as the D7000 currently lists on Amazon for $1499 new.) The number of available lenses tends to leapfrog periodically, as different brands release batches of new lenses on different years, and is pretty much a moot point anyway...your never going to own all 160 some lenses from either brand, and all the critical focal lengths, designs, and lens capabilities for the essential lenses are pretty much the same for both brands. Battery life is also a highly subjective thing, and entirely depends on how your using the camera. I've had anywhere from 400 shots to over 1000 shots on a single battery with my 7D, and well over 1500 with two batteries and the Zeikos grip (which is very reasonably priced.) Video features also tend to be somewhat subjective...and are generally moot if video is not something you are even concerned with in the first place. The Nikon's ability to AF during video is intriguing, but not that useful, given that the majority of serious cinematography done with DSLR's use a proper manual focus puller device for more accurate focus that is not prone to random hunting when AF can't find its mark.

The snapsort comparison left out a few things as well. The 7D has an 8fps frame rate, vs. the D7000's 6fps. However, its more than just the frame rate difference...the 7D guarantees 8fps @ 14bit RAW with a 15-frame buffer, while the D7000 does 6fps @ 12bit RAW with an 11-frame buffer (I think it might do 14bit RAW as well with a shorter buffer...can't find any stats on that right now.) The added output bit depth is a nice bonus, but the greater frame buffer depth, along with the two extra frames per second, are truly significant when shooting action. If you don't shoot much action, then the benefits of the 7D will probably not be all that valuable to you, and sticking with the T2i might be your best option right now.

Have you looked at Canon 60D? Same sensor as 7D, with fewer AF-points, and a tad slower (not as good for action photography). It has an advantage with the flip-rotate-screen over the 7D. The 60D is overall slightly better / easier to use for video.

I have no idea if the 60D have a funky name in the USA/Canada.

Canon 60D: That bigger grip and the top LCD actually are worth it. I was in the same boat after my camera got jacked. I don't regret it at all. It just feels so much better than the rebels.

That flip out screen is quite usefuly. I sometimes flip it out during portraits or events so that the subject can see what's being shot.

The numeric comparisons you have quoted are at best misleading.

Newer cameras such as the 7D and 60D have many advantages over the 5D, including video, a better LCD screen and better in-camera noise reduction. However, the 550D has all this itself. The 60D would offer a bigger body, with (for some people) easier external controls, and a larger viewfinder. The 7D would add these things, plus a complex autofocus system, and better weather sealing. The 5D offers a very large viewfinder, lower inherent noise at all ISO, super smooth and creamy low ISO, less in-camera noise reduction (the chrominance noise at ISO 3200 cleans up nicely in post processing, while affecting detail little), the ability to use lenses at their intended focal length, and more control over depth of field. I have owned many crop cameras (Canon and Nikon), but much prefer the shooting experience with the 5D.

Not the answer you're looking for? Browse other questions tagged equipment-recommendation canon market-segments or ask your own question.

12
What are the international translations for Canon DSLR body names?
1
Should I choose a Canon 550D or a Sony DSLR-A580?

3
If I upgrade from my Canon XSI to the T2i, will I get better image quality on long exposures?
1
Will switching from a Nikon D60 to a Canon EOS 60D be better for night photography, city photography, and portraits?
2
Canon T2i doesn't seem to take crisp photos
9
Mirrorless camera vs. mid-range DSLR — how to decide?
2
How to use a fisheye lens on a Canon T3i compared with a T2i?
1
How much does a step move the focusing ring?
1
Is the Canon 5D noise at low light better than the Rebel T3i/4i/5i/6i models?
3
What are the disadvantages to using older Canon flashes today?