Are prime lenses sharper than normal or telephoto zoom lenses?

Example:
The prime lens Nikon 1.4F G is said to be very sharp at F3.5.
So, if I compare that with the normal or telephoto zoom lens's F3.5, will the level of sharpness be same?

If no, then will the sharpness of the prime lens be better as compared to its counterpart at the max aperture (without diffraction)?

There is no answer to your general question.

Prime lenses are usually sharper than zooms at the same focal-length and aperture, mostly at wider apertures when the sensor out-resolves the lens. At one point lenses can out-resolve the sensor and then you will see equal sharpness in your images despite a potential difference in lens sharpness.

If someone were to built a prime and a zoom today with the best technologies, then the prime will be sharper since there are less variables in its design. However, once you compare lenses introduced at different time and even different quality levels, you will have to compare case-by-case.

Now, manufacturers choose to use different qualities of materials, different designs and tolerances today which sets the price-point of lenses. That is why you see standard zoom lenses which are very soft at their widest apertures. Other premium zooms can be extremely sharp from wide-open.

If we were to graph out the "sharpness" or various lenses, my guess is that we'd come up with something like this: 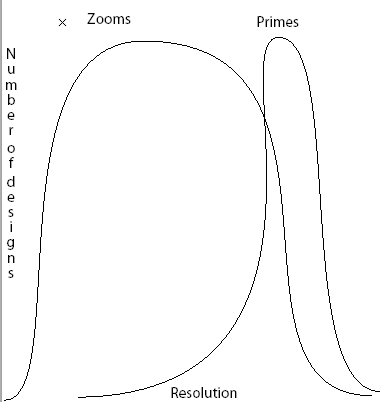 Keep in mind that this is hand-drawn based on my beliefs, not an actual graph of results from tests, or anything like that. Since it is hand-drawn, don't try to read too much into things like whether it might not be more accurate to show more overlap between the two, the spot with a negative slope on the left-hand part of the "Primes" curve, etc.

In any case, let me point to a couple of points this is intended to show.

As you reduce the aperture (smaller opening/bigger number), differences between lenses tend to get smaller. By f/8, even poor lenses usually produce decent results. By f/11 they're all starting to get worse, and by f/22 they're virtually all getting pretty poor.

In general a prime lens is easier to build and need less glass due to the single fixed focal length.

Add to that the fact that most prime lenses have a wider aperture than their zoom equivalents, which requires a better lens design and better glass (including coatings) to allow full use of the benefit of a wider aperture without horrible distortion or colour fringing, stopping a prime lens down can only make the result better as pretty much any lens gets sharper when you reduce the aperture (up to a point, depending on the lens).

As a result, a prime lens will, provided the lenses are from roughly the same area, always give a higher quality image.

(A significantly older prime lens can be worse because of the advances in optics since. A zoom lens also needs to compromise on distortion, especially when it covers for example 24-70mm, wide angle to the beginning of telephoto.)

Not the answer you're looking for? Browse other questions tagged lens zoom telephoto prime sharpness or ask your own question.

51
Why is the 50mm prime lens the most standard?
25
Considerations when purchasing a prime lens?
15
What is a normal lens?

2
What is considered "sharp enough" w.r.t the landscape pictures from a DSLR with F16?
20
Why are cine lenses so much more expensive?
1
How to compare the focal length of a 50mm prime lens with the default lens of a point and shoot camera?
2
Am I correct that photos from the 16-50 lens won't be much better than cropping photos from the 35mm prime?
1
What are the pros and cons of constant-aperture zoom lenses, for a relative beginner?
1
Are prime lenses sharp across the whole frame while zoom lenses are soft in the corners?
24
Why buy prime super telephoto lenses instead of zoom super telephoto lenses?
4
Do old manual focus prime lenses give better image quality than new kit lenses?