How do I avoid so much noise in this HDR image?

I rarely attempt HDR shots at night, and maybe that is my flaw with this shot, but I was wondering why this image produces so much noise after HDR conversion.

Of course after Photomatix I was going to bring the image into Photoshop and fix the moving subjects and clean up the image, but the dark sky is so noisy maybe I am doing something wrong that can be answered here. 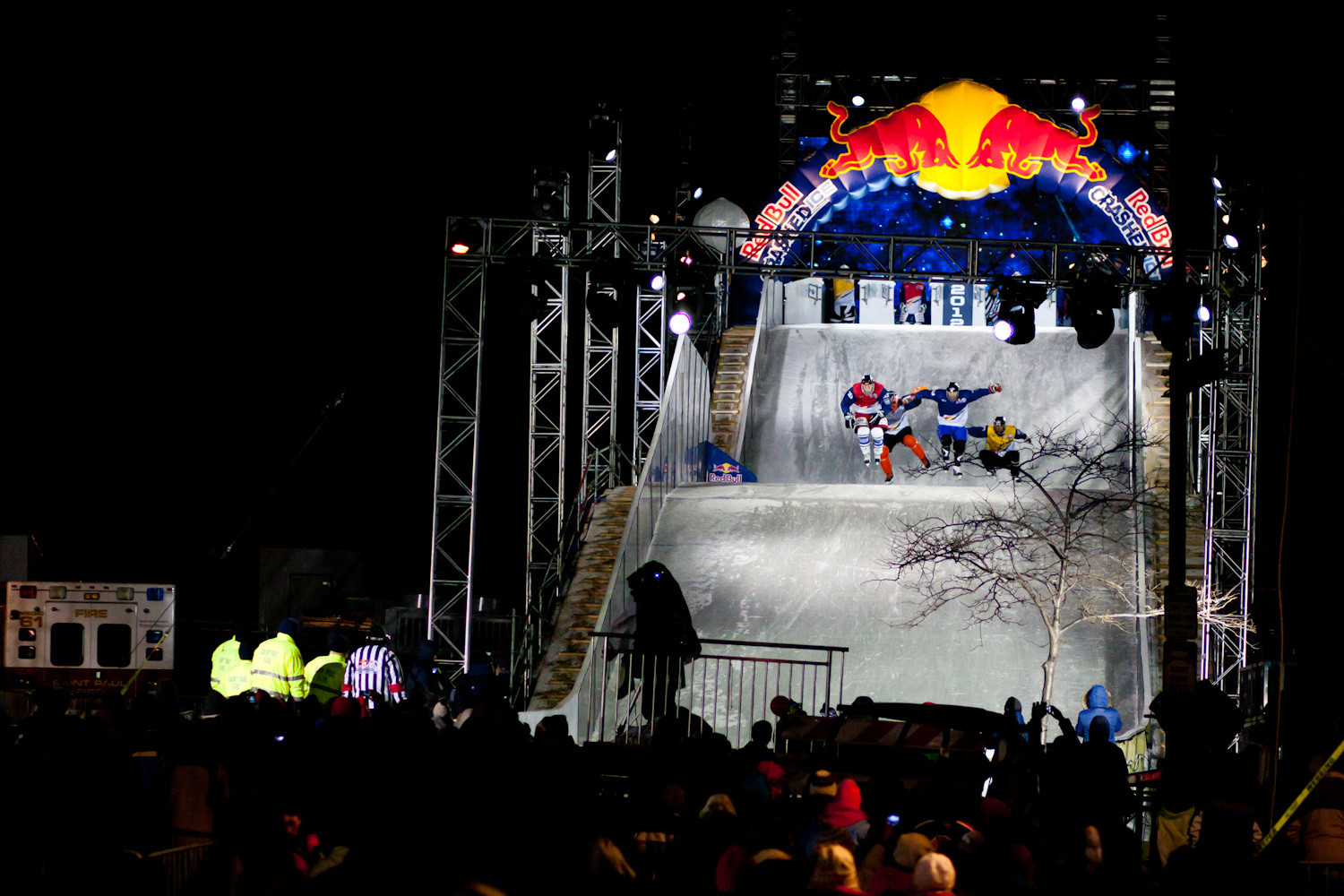 The three shot HDR after Photomatix: 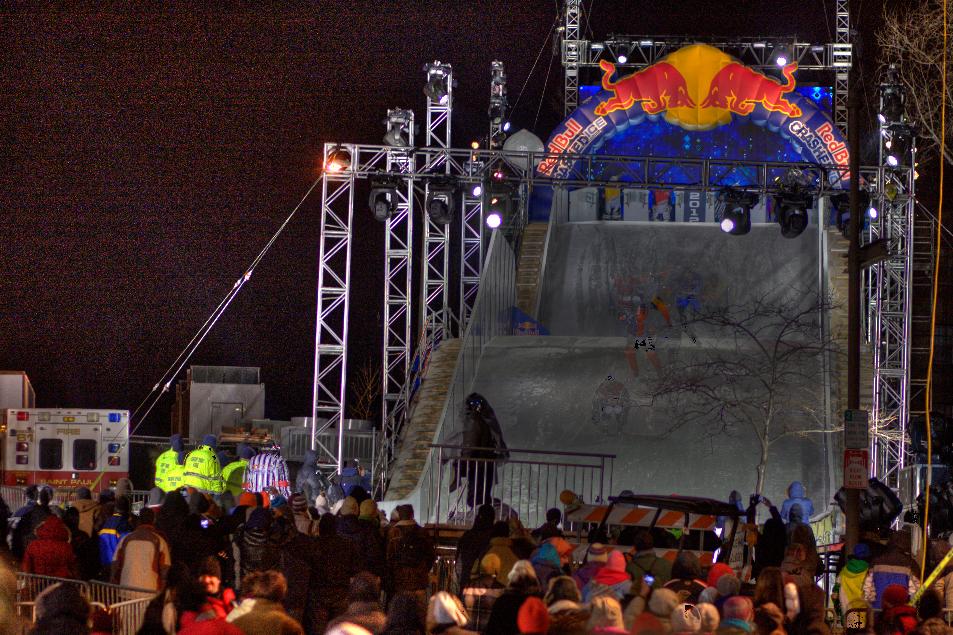 Secondly dynamic range is inversely proportional to the image noise floor. It's the difference between the brightest thing you can capture, and the point at which detail is lost to noise in the shadows. Thus if you have very little noise, you gain extra detail in the shadow and thus have higher dynamic range.

You can tonemap from either high dynamic range or low dynamic range images (the latter is sometimes referred to as "single image HDR" or "fake HDR"). The only difference is that if you try and tonemap an image with low dynamic range (hence higher noise) this noise will become very apparent in the output.

Fundamentally the problem here is that the dynamic range of your scene is far too large. Think about what you're photographing, the bright areas of the ice are lit by intense floodlights. What about the shadow areas of the image? They're lit by reflected light (after bouncing multiple times), distant man-made ambient light, moonlight and starlight etc.

The point is the dynamic range is huge between the ice and the dark areas. So the dyanamic range of your original blend is not high enough, hence you have excess noise in the tonemapped result by the processes described above. Essentially tonemapping is trying to even out the brightness where that simply isn't practical.

Even if you expanded the range of intital captures you'd still have difficulties with bloom and flare when trying to image dark regions next to extremely bright ones. Personally I'd forget about trying to shoot tonemapped HDR in these situations - I think your original image looks fine.

Try excluding your overexposed shot. It's just not getting detail out of the dark sky (because there isn't any to get). The noise it gives you is being treated as the only detail there.

If that doesn't solve it, please post all three shots, preferably in PNG converted straight from the RAW. Maybe we can see what might be wrong from the parts.

Otherwise you may just have to manually mask the sky.

You haven't shot an HDR image which requires multiple exposures (at least two) to capture the whole dynamic range.

What you did was push the shadows, hence introducing shadow noise by pushing the image.

This site is a very valuable resource and explains what HDR photography is: http://www.cambridgeincolour.com/tutorials/high-dynamic-range.htm

Edit: I just noticed, you did use more images - still, you have pushed the sky too much. An HDR approach will not make a black sky anything other than black.

I see you are using Photomatix. You can do several things. You want to not be so severe on Detail Contrast and Micro-smoothing. I find that both of them can really enhance noise under certain circumstances (but they do enhance the detail also, so it is a fine line)

Watch your Shadows Smoothness. Try turning that way up, you're blacks will get blacker which will help. Also try Shadows Clipping, this might be the case where that is useful.

And while you are in there, certainly work with Smooth Highlights to try and get the white of the slide back, it looks awful right now, too gray. White Point may or may not help.

Do you use Lightroom? Work the noise reduction in Lightroom before you export to TIFF.

Noise is an issue in general with HDR photography. You can use noise reduction software (e.g. Noise Ninja, Lightroom 3/4 noise reduction or one of the many other pieces of software available) to selectively reduce the noise in the areas affected.

I believe the best thing to do in this particular instance, as the sky is black, would be to open the HDR shot along the original shots as layers in Photoshop (or equivalent) and then use masking to mask away the noise in the HDR sky and reveal the black sky from one of the other layers.

The masking technique described above is a good one to use in HDR photography in general as it allows the removal of any undesired results from Photomatix - there will always be sections of the photograph that need to be manually cleaned-up after using a tool like Photomatix. The sky in this example is one of them. This should be considered a normal part of the HDR processing.

You cannot use multiple images for HDR effectively if there is a lot of motion in the shot, but you can create a decent HDR image from a single shot if required.

I agree with Matt BUT there is something extremely wrong with the final result. The sky noise is bad, as you say, but what it has one to the characters on the downhill is far worse.

You may be aware of the following and not care but as it hasn't been remarked on:
What has happened is that the 3 images have the moving characters at different locations and the system has not applied any intelligence to attempt to correlate the moving parts but has averaged the portions together with weighting for brightness. The result is that you have multiple characters overlaid with background. As there are 3 images and the characters move you get 33% or less character and 66%+ background - hence the horrendous result.

Re the noisy sky: The HDR image is bringing up the low level to bring out the detail and compressing the mid range detail, but as it has brought the tops of the "pylons" up from almost black to quite bright, it has dragged the dark sky up wit it. If you have control of the curves you want to have far less change in output level at low input brightness levels. A deeply S shaped gamma curve at the bottom. Similarly at the high end you wouild benefit from a fra less linear gamma curve so the areas that are almost washed out in the original stay that way - see the green jackets at left. It is good to get more detail from them but they have been brought down far more than is necessary for an Ok picture.

Also - the HDR image is of far lower resolution. You may have scaled each down differently, but as displayed the original is 1500 x 1000 and the HDR version is 953 x 635.

Not the answer you're looking for? Browse other questions tagged technique hdr night or ask your own question.

2
Can you clarify a better workflow for bracketed exposure HDR 360-panoramas?
6
How do I shoot massive bonfire in order to produce an HDR image?
3
How to get really clean almost HDR images in night time (see example)
7
How can I salvage an HDR image from non-optimal source images?
1
How to photograph a lightbulb?
2
Get HDR for part of a image
3
Improving My Night Photography Shot with Post-Processing
7
How to avoid these artifacts around cables in HDR?
0
How to correctly calculate the Dynamic Range of an image