Does fog enhance the colours during dawn and dusk?

So I was off work one day when the sun was going down, and it was foggy (but clear without much clouds) and I noticed that the setting sun coloured the entire sky with a wide range of shades of orange, creating a beautiful backdrop to the cityscape. Shame that I only saw that when I was driving!

My question is, does fog actually helps create this shades of colours during dawn or dusk, similar to being a gigantic diffuser?

Like many, I always love the scene of a sunrise/sunset, the colour is simply lovely. However I do notice that sometimes the saturation is low and it only showed a tint of yellow before going dark, where sometimes you get this saturated sky with deep orange to golden colours of the sky. How does fog affect the sunlight in these situations?

The effect is known as Rayleigh scattering. Blue light has a wavelength of around 400 nano meters, which is more likely than red light (650nm) to be absorbed by particles in the sky and radiated toward the ground, leaving the red light to carry on and hit our retinas.

The water vapour in fog, however, are much too large to scatter individual wavelengths and thus scatter the entire visible spectrum similarly (why fog is usually white, or the colour of the source light).

White light itself is merely a bundle of particles/waves of different wavelengths comprising the visible spectrum.

Image from this link... 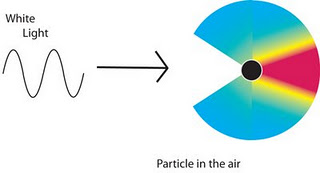 Dust in the atmosphere is the main cause of colorful sunrises and sunsets. According to wikipedia sunsets tend to be more colorful due to the presence of more dust in the atmosphere at the end of the day compared to dawn. Dust scatters (Rayleigh scattering) the small wavelengths of light (blues and greens), leaving the reds and oranges to come through.

But water vapor and other larger particles cause Mie scattering which scatter the red and orange (longer wavelength) light further into the sky.

So when you have an intense red/orange sunset but it's localised near the horizon, that's mainly due to dust. When the entire sky seems aflame, that is likely caused by water vapor which is spreading (scattering) some of the longer wavelength light.

I would think that vapor needs to be some distance towards the horizon, and up in the atmosphere to have a great effect. Localised fog probably wouldn't have quite the same effect. But where there is fog, there often would be a lot of water vapour higher up and further out as well to cause the skies to light up.

Not the answer you're looking for? Browse other questions tagged landscape sunrise sunset fog or ask your own question.

31
How do you make the most stunning sunrise and sunset photos?
7
How does being in a polar region affect the golden and blue hours of light?
12
How can I make fog whiter and more attractive?
6
How to remove fog while shooting and during post-processing?
16
How do I accurately and objectively capture the color of the setting sun?
4
How to set up lighting when using a fog machine in the background of the model?
3
Automatic identification of lucky images for landscape photography
0
Timelapse color flickering
1
Why does the sun look odd when merging 360° photos to HDR?