How do I light a full length portrait?

I've built a basic home studio that includes a gray paper backdrop, 3 speedlights, 2 light stands with umbrellas, a tripod (to use for self shots or as an extra light stand if in a pinch), and some gels to be able to color the background.

How do I use this to light full length portraits? I know this is going to be one of the artistic choices that I will have to make, but I'm looking for a safe classical setup to start experimenting with.

Also, what is a traditional aperture setting for full length portraits? 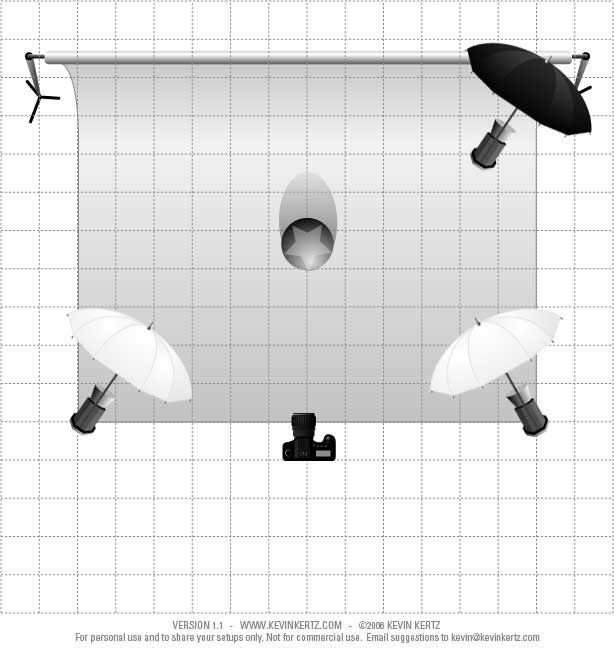 I show the main and fill lights as shoot-through umbrellas in hopes that you have shoot-through. If that's not the case, no matter... The reason I chose shoot-through is that it provides a more diffuse light source so you will have somewhat more flattering results and more importantly, the light won't fall off as quickly as with a reflective umbrella. Reflective umbrellas are great for focused lighting, but it is hard to get everything from head to toe lit with one. A bit of trial and error should help you figure this out and it sounds like you're not shy about standing in front of the camera to test assumptions.

The two lights, main and fill, are typically started at a 2:1 ratio. That is, the light output from the main light is twice that of the fill light. For the purposes of this discussion, let's assume the main light is the one at camera-left.

Typically, you start your main and fill lights 45 degrees from the imaginary line between the camera and the subject and somewhat above. You might want the fill a bit lower just to take some of the harshness out of the shadows under the nose and in the eye sockets. Closer is always better with lights, as they become "bigger" light sources, but you also have to take coverage from head to toe into account. That might dictate moving the lights back 5-6'.

I don't know what kind of gear you have but Canon and Nikon have really slick ways to simply set ratios and use ETTL to achieve correct exposure. Since you said speed lights, I'll avoid the discussion of studio strobes.

The third light in my diagram is a hair light and it's normally placed very high and again, at a 45 degree angle. I don't use too much hair light -- just enough to get some shine and separation from the background. The modifier I show is an umbrella, but anything that focuses the light away from the background will do.

This is how I would start a three-light setup and move from there. You've restricted yourself by selecting umbrellas and full-length. If you had a modifier like a big octabank you could put it right behind the camera and use the other lights to add dimension.

Regarding aperture, some feel f/5.6 is the most flattering aperture for portraits of females. I don't know where they came up with this and I have no results that bear it out, but I would say that in a studio setting opening up more may give you some depth of field problems. The last thing you want to do is blow the focus because you opened up your lens unnecessarily wide. Unless you are doing it deliberately for artistic effect.

Posing is important too, because if your subject is posed incorrectly even the best-calculated lighting setup is worthless. A starting point for a female beauty portrait is to get the shoulders turned about 15-20 degrees with her right shoulder (camera-left) closer to the camera. You then have her turn her head back toward camera-left so she is almost (but not quite) looking over that front shoulder. Be careful not to get the shoulder in the way of the face. Again, this is a starting point. If it's a business portrait, square the shoulders a bit more.

For a male, posing is much more straightforward, as men can square their shoulders to the camera quite a bit more. The trick there is getting them relaxed.

You definitely have more than enough to make great portrait pictures, which I am sure you will. I hope you will agree with me that there are countless number of ways to take any single picture?

Similarly there is no single way to make full length portraits. Nor is there a correct aperture setting. You want to be correctly exposed, and that you can achieve by using a light meter. (As there just too many factors to consider: power of flash lights, light to object distance, distance of object to backdrop, ambient light, etc.)

There are just too many things to consider. Still, to begin I would suggest using a single light source, 3+meters from the background (to get a dark grey/black background). The light source has to be a little bit further away from the object in order to make sure that you light the object fully. If it is a female then you definitely need to use a soft box (or at least bounce the light off the ceiling or walls), you might get away with harsh side light with a male subject though.

When making studio shots, I usually aim to have an aperture of F8.0 or smaller to get a deeper Depth of Field. (Unless you want something else)

Use short lightning as opposed to broad lightning and once you are happy with just one lightsource, start experimenting by adding a secondary light, hair light, background light (with gels for example).

Not the answer you're looking for? Browse other questions tagged lighting portrait studio-lighting or ask your own question.

14
What lighting equipment do I need for a high contrast portrait photo?
18
What is split portrait lighting?
3
How can I get good results from a one-light portrait setup?
5
How would I setup a portrait of a boxer like these?
2
How should I set up my studio to take sharp portraits without shadows with two white umbrellas and one silver umbrella?
6
How does the inverse square law relate to the softness of light for portraits?
8
Corporate Portraiture Advice
5
How to light a portrait so that lines are drawn accentuating the subject's cheekbones?
6
How can I get full-length 'shadowless' portrait photography?