How to capture the scale of a scene?

My framing in the following photo completely failed to capture the sheer height of the waterfall. If you don't know I was standing at the top of the waterfall, and the "splinters" at the bottom are full-size tree trunks 2 feet in diameter, you wouldn't have a clue how tall it is. It just looks like a smaller, shorter waterfall shot with a slower shutter speed. 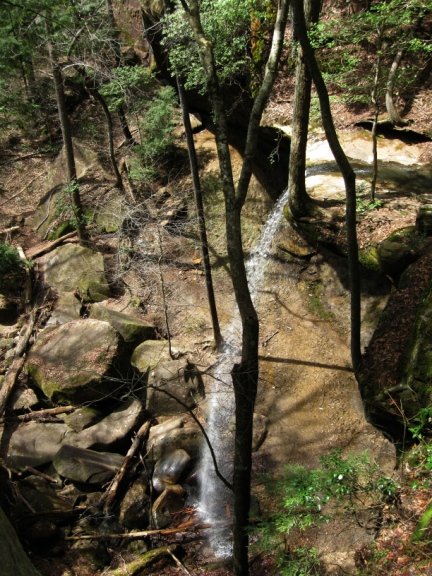 My question isn't about this picture or waterfalls in particular, but about framing to capture the scale of your subject in general. What are techniques to show just how big something really is? Or conversely, something really small? Especially things like rocks or water that look roughly the same at any size.

composition shooting-technique scale
Share
Improve this question
edited May 15 '12 at 4:09

Perspective is an element of composition, but of a different form than classical forms, such as object placement in the two-dimensional projected space of the scene that the camera actually captures. Perspective is about arranging elements of a scene in full three-dimensional space. That could be associating the size of a near object with the size of a far object, capturing both near and far parts of a single object, and capturing objects with the right field of view to properly portray these relationships.

Depth of field can also help in portraying perspective and distance, however it can often be difficult to achieve a thin enough DOF with a reasonably priced lens, and framing limitations may simply make achieving a thin DOF that can blur near or far elements of a scene impossible. That again leaves you with near/far relationships as the primary method of portraying a sense of scale, size, depth, etc. If money is no object (or not a huge concern), some lenses offer "perspective control" via additional lens adjustments: tilt and shift. Most tilt/shift lenses available for modern DSLR's cost around $2000-$3000, however they are the ultimate tool when it comes to solving your problem.

An example would be photographing a very tall building with a wide angle lens, while standing close to the bottom of the building, and capturing the entire height from ground to roof. Such a shot generally produces an imposing perspective of the building. The relationship of the distance between floors of those near the ground, vs. those near the roof, can tell a lot about how tall the building really is. Another approach would be to associate something of large size to something of small size or known size. In the case of a huge waterfall, contrasting the fall with a bridge, which in turn can be related to the size of a human, can portray the proper sense of scale.

Its all about perspective...the relationship between near and far, large and small.

In terms of composition, you can include items of known scale (a person, a car, a city, etc) but maybe that's not always possible, or desired when your goal is a natural look.

One way to make things seem bigger is to shoot looking upward. (a reverse MySpace angle, if you will) The object may not actually look any bigger but it can produce a different emotional response - by shooting downward it has a different feel. ("The people down there look like ants")

Another problem is that since the picture is 2D, it's missing the depth cues you normally get when you see it with your own [two] eyes.

One possibility is to open up your aperture, and get some out of focus areas either at the wide end or the near end.

Since photographs do not provide any depth information, our brain tries to recreate the depth of the original scene using what it knows about similar scenes. For example, if the scene has a tree, we will use the direction of the tree to determine what is up and down and orient everything else based on that.

Your picture has very few cues about what the horizontal and verticals are. The waterfall gives some idea, but that isn't sufficient, because the tree trunk that is right in front of it doesn't really change much in shape from the bottom to the top, and we don't see the ground underneath it. I believe that tree is in part affecting the perceived depth of your picture, making it look too flat.

I think the picture would be improved if it showed a bit more of the scene. The upper ground level would be better established if you showed more to the right of the frame, and the lower level would be benefited from a bit more on the left side of the frame. That tree in front of the waterfall is your enemy, you would have a better picture if you moved a bit to the side to avoid it, or if you could somehow include it with the ground around it.

The suggestions others have made of having some object of known size in the picture would help greatly. Given that you are in the wilderness, a tree in the lower level would be something I would look for to include in the frame for reference.

This is likely a stretch of an answer, but in cases like this, and when I was in the mood to experiment, I had relative success taking a stereo picture, which better conveys depth. With a regular camera you do this by taking two pictures with the camera moving about 2 inches horizontally. This sort of simulates the slightly different perspectives that we get from our two eyes. Then these two pictures can be composed in the computer into a stereo picture, and there are many techniques to create these pictures and to view them. For some basic info on this see http://en.wikipedia.org/wiki/Stereogram.

You need to include a familiar object so you provide the viewer with a frame of reference. Typically, we see people used in this manner, where in your image you need a person standing either at the bottom or near the top of the falls.

I think the answer is simple...

1. If you want to show something is huge, then your camera ought to be positioned low and pointing up. The perspective will highlight or exaggerate the height of the object.

2. If you want to show something is small, then do the opposite, point down. Alternatively, depth of field can also help, as a small in focused object with a very blurry background can help create the impression of distance and the larger the distance creates the impression that the item is smaller.

In both situations a wide angle lens will help as it basically captures more perspective. The convergence of the perspective tells your brain how to relate items... this and also because you intuitively look up to big objects and down on small objects, helps generate the right cues for the mind to appreciate what it is seeing.

Not the answer you're looking for? Browse other questions tagged composition shooting-technique scale or ask your own question.

4
How to capture the depth and enormity of a deep ravine?
28
How can I make short people look taller in photographs?
6
warehouse interior photography to show scale

13
How can I get people to take an expression which fits the scene?
2
How to compose a scene which doesn't have any apparent story?
6
warehouse interior photography to show scale
9
How to capture fog movement?
9
How to photograph an adult and a child together such that the adult doesn't dominate the scene?
3
How to compose a scene when including the actual context isn't simply practical?
2
How do I transform an image to match another in terms of scale/rotation/aspect ratio?
5
How to improve the composition of the scene depicting time's effect on age?
1
Mystery Scale on Hanimex Zoom Lens