How to set up a diamond for photography?

I'm trying to take a photo of a small, princess cut (square), 0.5 carat diamond . I have hard time placing it on a surface as I would like to one of the diamonds sides to be flat on the table. The problem is that the diamond isn't always cut in a way that it 'sits' on one of its sides like in the following image: 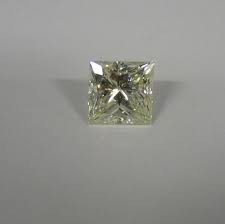 In the following image the diamond 'sits' on one of its pavilion facets (all the square sides are 'floating' in the air). This is the case for most of the small sized diamonds. 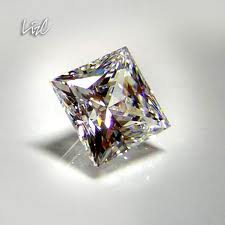 What I'm looking is a way to glue the diamond to the surface without seeing reflections of the gluing material inside the diamond. maybe some sort of a thin transparent sticky material other than jey.

Wax is the right idea. The "standard" for product and food stylists, if there can be said to be one, is called "Tacky Wax" (the original is Bard's), and it's available at most well-stocked hobby shops. It's a translucent white material (almost clear in thin layers, whiter with greater bulk/thickness) that can be worked easily into just about any shape and is, as the name implies, tacky.

Whatever you use, though, is going to have some effect on the appearance of the diamond. Since the sparkle depends on total internal reflection, and that depends on the difference between the index of refraction of the diamond and the material around it, anything other than air is going to look like something other than air if it makes close surface contact. When the gem is merely resting on a relatively rough surface (like, say, paper), there is actually very little optically significant contact between the diamond and the surface -- most of what is right at the surface of the gem is still air. That's not the case with anything like a glue or wax; you are going to have a relatively large patch ("relatively" being the key word) where the normal diamond/air interface is replaced by a diamond/substrate interface, and that will have different optical properties.

That little bit of reality means that you're going to have to play with the light and the camera angle to minimise the effect of the substance you're using no matter what you do. The most benign substances will merely ruin the reflective properties of a single facet and won't add any colouration; all you need to do is find a lighting angle that doesn't depend too heavily on that particular facet to produce a sparkle.

You can get craft glue that dries to a glossy, transparent finish. It is designed for card making so is usually tacky rather than super-hard. You can also get transparent sticky glue 'dots', which are like a sticky gel. Both should be available from hobby/craft stores

The transparency of these should limit the visibility of them through the diamond. It would obviously be prudent to test how fast they hold an object before trying them on a diamond!

You could consider an ornate mount of some kind, and make it a feature rather than a problem.

Would some kind of dimpled paper help? If the stone sat in one of the dimples?

(I realise this isn't the look you're after, but it might help someone else with a similar problem)

How about laying a large sheet of glass on the table? So instead of standing on the table, the diamond stands on top of the glass, producing an illusion that it's floating slightly above the table. The hard part would be to keep the diamond sparkling while preventing reflections from the glass itself.

One more idea, what about using some textile material? Maybe something like velvet? I do not know whether you need more "documentary" photos or something for promotion. In second case you could use something like crumpled velvet of appropriate color and put the diamond on it.

Maybe something similar to this (ps: this is only a hobby photo :-) ). I could be dark blue or green velvet or maybe black, which seems to be often used for this purposes - found examples here and here. In this case you would not need any glue.

Not the answer you're looking for? Browse other questions tagged macro product-photography jewelry or ask your own question.

18
How to photograph sparkly objects?
4
What should I consider when getting a camera for product photography?