What features in Lightroom 4 make it worth upgrading?

The first beta release of Lightroom 4 was released today. If you've managed to download it and have a play with it yet, what features have impressed you enough to want to upgrade?

First, there is a fairly clear explanation of the improvements on Adobe's beta page for Lightroom 4:

For the development of this latest release, we've focused on further maximizing image quality and expanding output options. New tools let you extract more detail from highlights and shadows, make a wider range of targeted adjustments, and easily share your images and video clips on social media and photo sharing sites.

There have been some basic UI changes over LR3. Where before the modules were Library, Develop, Slideshow, Print, Web...now they are Library, Develop, Map, Book, Slideshow, Print, Web. The Map module is pretty self explanatory...it allows you to view geotagging from EXIF, or tag photos with map locations manually. The Book module allows you to create books, and either export them as PDF, or upload them directly to Blurb for publishing as a physical book strait from Lightroom.

First, the image processing certainly seems to be improved, particularly in shadows. I've worked with some of my most recent photos, where I had a huge dynamic range to work with that was well beyond the range of my camera. I had to block the shadows to capture the highlights properly. In LR3, I had a moderate ability to bump up shadow tones, but noise was quite prevalent. In LR4 beta, I'm able to bump up shadows 100% and darks 100%, and the visible noise is maybe about HALF that in LR3. The improvements here are considerable, at least in this preliminary look.

The ability to remove moire is HUGE. I've messed with it a bit on some test images, and it seems pretty good. I have not yet had a chance to try moire removal on a real-world photograph, so I can't speak to that. It also only seems to be an adjustment brush option as far as I can tell...there is no global slider to adjust moire (although thinking about the nature of that particular problem, I'm not sure a global slider would really work.) Regardless, the fact that they are putting effort into that area is a big selling point.

I've noticed some other differences in image processing. Noise processing seems to have been changed again. I'm not really sure it is as good as LR3 or not...I'll have to do more experimentation, but at first glance, noise processing seems to be a tad worse than LR3. I also seem to see more jagged edges for fine details than I used to see before...or perhaps I never noticed them as much before (I am in a deep analytical mode right now, so that may be part of the problem.) I shoot a lot of landscapes, and fine twigs and branches seem to have rougher edges than they did in LR3. I'm not sure if this is simply because Adobe is tweaking the rendering and image processing engine, and things are fluctuating at a fine detail level or not. If I can verify there is indeed a difference, and I don't see them improve in future betas, I'll certainly raise some complaints with Adobe.

The white balance brush is intriguing. I've found it a bit difficult to use, and have had to rely on a large amount of feathering to really get any sort of decent outcome. It is probably a feature that will simply take some getting used to, and when it comes to snow photographs, I can see it being a godsend (without it, its very difficult to get sky's nice and blue without also making snow overly blue as well...with the white balance brush, you can clean up snow without affecting the sky, which is pretty awesome.)

When it comes to exposure and presence settings in general, some significant changes here. The sliders have changed for all the exposure settings. The "Brightness" slider is gone, and "Contrast" has been moved up under "Exposure". The rest of the settings have been renamed. Instead of "Recovery", "Fill Light" and "Blacks", there are now "Highlights", "Shadows", "Whites", and "Blacks", in addition to "Exposure". There are now a total of five, rather than four, sliders that affect exposure. The "Exposure" slider is still roughly the same, affecting the middle tones as before. The range of middle tones has been reduced a bit. The "Whites" slider is effectively the same as the "Recovery" slider from before. The "Highlights" slider affects a range of tones between whites and midtones. The "Shadows" slider is effectively the same as the "Fill Light" slider from before, although its range also seems a bit reduced. The "Blacks" slider is pretty much the same. The sliders (except Exposure) have all been changed to support a different range of adjustment than before. All of them support +/- 100, which allows greater freedom in how you tweak the tones in your photograph. Previously, Recovery started at max, and only allowed reduction. Both whites and highlights can be pushed now, rather than simply pulled. The same goes for Shadows, where as Fill Light before could only be pushed as well.

Ironically, for all the changes in adjustable tonal ranges in the exposure tools, the Tone Curve has remained unchanged. There are still only four adjustable tonal ranges from a curves standpoint. It was convenient in the past to be able to adjust the tone curve and know exactly what exposure range that would affect. That connection is gone now (at least in this version of the beta), so the only thing you have to go on to know which range of tones will be affected by curve adjustments is the monotone histogram in the curve tool itself.

For me, as I print at home, the soft proofing features are probably one of the things I've looked forward to most. I have done some basic experimentation with it so far. Its similar to Photoshop's soft proofing (no surprise there), however its more limited. I've noticed that it can be difficult to fine-tune settings while in soft-proofing mode. It regularly asks if I want to create a "soft proof copy" or modify the current image. I'm not really sure what all that means or how it would impact the master. Its rather annoying to constantly be nagged about creating a copy. One a copy IS created, all the editing tools are locked down...so it seems your creating a point-in-time snapshot of a "proof". I think the soft proofing feature can definitely use some improvement, and I'll probably stick with Photoshop for proofing and printing for now. The fact that its been added is another HUGE selling point for self-printers.

Finally, another feature that has been oft-asked for is GPS. I don't have any Geotagging for my photographs, so I have not really been able to see it in action yet, but its definitely a handy feature. Even if you do not have a geotagging device or feature for your camera, you can still tag your photo locations within lightroom. Just bring up the Map module, and either pan around to or search for your location. Right-clicking a location on the map allows you to add a marker to that exact location. You can tag photos in bulk, or one at a time, which is extremely handy when you have a lot of photos taken at the same location. At the moment, there does not appear to be any way to bulk-geolocate images during import...outside of having GPS data embedded in the photos strait out of the camera.

I'm a pretty compulsive geotagger so for me the ability to geotag direct in Lightroom is fantastic. Previously I've been using Jeffrey Friedl's excellent geoencoding plug-in, but that requires switching out to Google Earth (or similar) to pinpoint a location.

The geotagging UI in LR4 is a joy to work with: just drag from the filmstrip and drop on the map. It uses an embedded Google Maps view with all the usual modes supported (map, satellite, hybrid, terrain) as well as two new map modes (Light and Dark) with more muted colours. The name of the location you're viewing automatically appears in the top right-hand corner of the map (as you can see below).

It will even import locations from a GPS tracklog (saved from a GPS device like a Garmin). Yup, I'm happy! 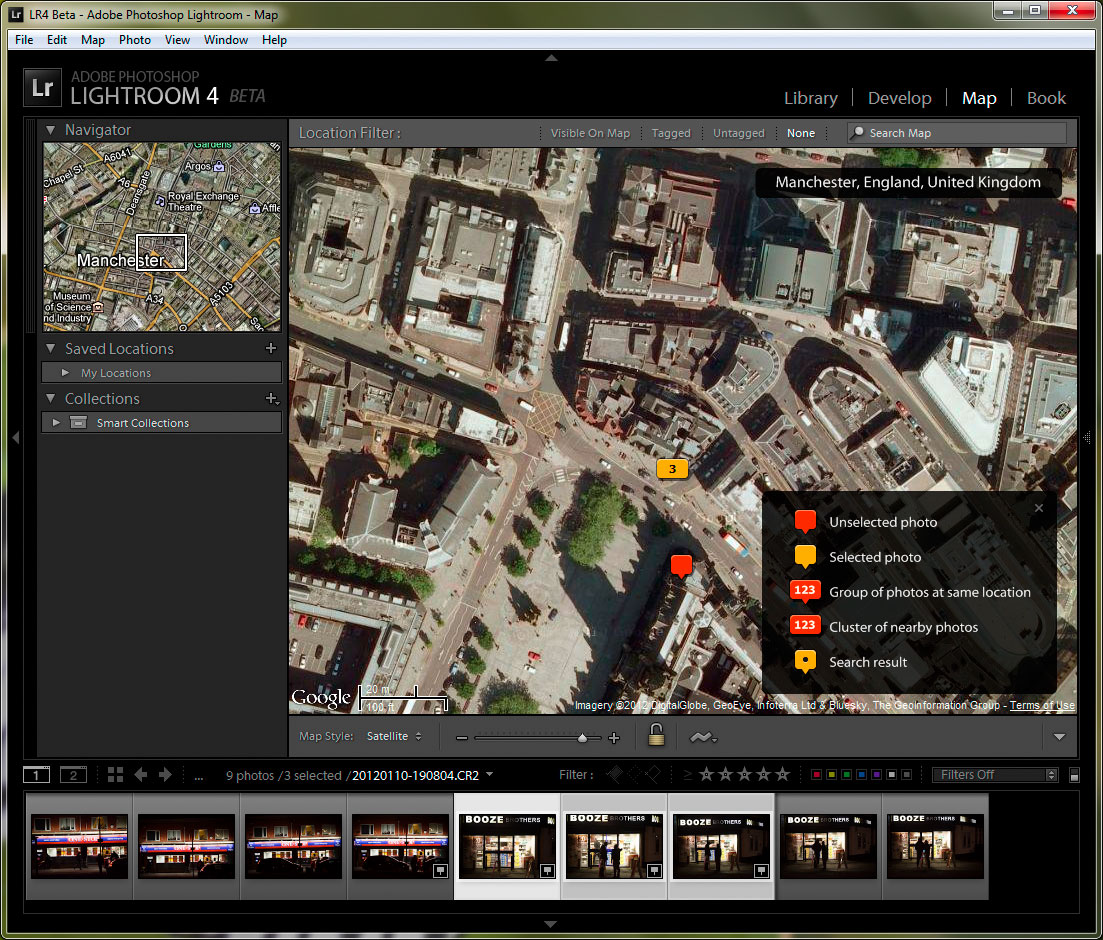 As I have already suggested over at another stack exchange site here, the additions to the additional video capabilities are very welcome and great for people who want to use Lightroom functionality in video tasks.

Beyond that, the most compelling reason for me to upgrade(while considering the beta feature set) likely will be the ability to use a white balance brush. This will come in handy in many cases where you are fighting with multiple different color temps and simply could not overpower with flash or had no choice in the matter. I am very excited for the ability to do this within Lightroom.

For my money (which will be emigrating to Adobe as soon as the update is available to buy), this is the killer improvement.

It's the one thing I've never managed to do but have really wanted.
I have several projects which are just crying out for the photobook format.

Not the answer you're looking for? Browse other questions tagged lightroom lightroom-4 or ask your own question.

5
How Does Lightroom 4 Coexist with 3.6?
2
How do I do advanced editing of videos in Lightroom 4?
3
How do I backup raw files and lightroom metadata without running lightroom?
30
Lightroom plugin development -- is it worth it?
2
What's the best way to get a photo from Lightroom to another PC for printing?
0
How can I exclude nested keywords from a Lightroom smart collection?
2
Lightroom & Facebook: Can't download comments
1
Older Lightroom and newer Camera (e.g. Lightroom 4.4 and EOS 70D) - will it work?
2
How do I use the Lightroom print template for calendars?
6
Which software is actually needed to update for Adobe Lightroom to support new cameras?