How can I take shallow depth of field photos with a point-and-shoot camera?

I have a compact digital camera, and in macro mode I can manage to achieve a blurred background, if the background is far enough away. Can this be done when taking non-macro pictures, and if not, is there a way to simulate it?

When I shoot portraits with my brother's DSLR, it is quite easy to fade out the background. But with my point and shoot camera, I haven't been able to take such photos.

I choose a large aperture for my camera but it still doesn't work. I know that standing further and zooming will result in a smaller depth of field, but it doesn't seem to be enough to get the really nice "bokeh" look. I've tried macro mode, and that will work if the subject is close enough and the background far enough away, but how can it be done with non-macro pictures?

Why are DSLR cameras are so much better in this area? What are the general recommendations to do this using a compact or super-zoom camera?

There's a good answer from Brian Auer, which I'll reproduce here, as it pretty much covers the problem you're trying to solve:

Ooh, good question. Yes, but how much will depend on the camera.

If the camera has manual controls for aperture, that definitely helps. It also helps if the camera has zoom, as most P&S cameras do. The problem with creating a shallow depth of field comes from the fact that the sensor is so small, and as a result the lens is close to the sensor — thus creating very small focal lengths. My P&S has a focal length range from 6mm to 18mm — which is very small. They create an effective focal length much higher due to the small sensor size. As I said in the tips, a short focal length will produce an image with nearly everything in focus.

So to blur the background using a P&S, you’ll get your best results if you zoom in all the way, focus on something close (you don’t want to focus out to infinity), and have a background that is much further away. So your two points of control are focal length and subject distance. I just gave it a shot with my camera, and it does work.

Bokeh is subjective, and all cameras can create bokeh. One pre-requisite to pleasing bokeh is to have sufficiently out of focus areas. Most details that are only a bit out of focus don't look too pleasing.

Something is more out of focus the further away it is from the plane of focus. In addition, the the shallower the depth of field, the quicker things become out of focus when moving away. Depth of field depends on several things: f-number, distance to subject, focal length, and the circle of confusion (determines what can be perceived as in focus or out of focus).

The f-number is a property of the lens, essentially how large the iris or opening is. The rest are functions of the sensor size. Basically, when compared to a larger sensor, a smaller sensor will need to be closer to the object or have a longer focal length for the object to be the same size in the picture. Note that increasing the focal length can allow you to stand further away for the same object framing, which will compress the perspective. Less of the background will be shown, limited more to what is directly behind the object and usually further away. The small sensor is only taking a small part of what a larger sensor would take (see this).

So while the lens matters, the sensor size matters more. Once you have a larger sensor, then getting good bokeh depends on the lens but also composition: selecting the a good background and ensuring that it is a the right distance away.

That said, even with a P&S, you can get reasonable bokeh with composition, IMHO. Of course, if you want to be able to have better bokeh in more situations, you'll need a larger sensor for what is called increased DoF control, or do an extreme version of this. Here are two I've taken with P&S: 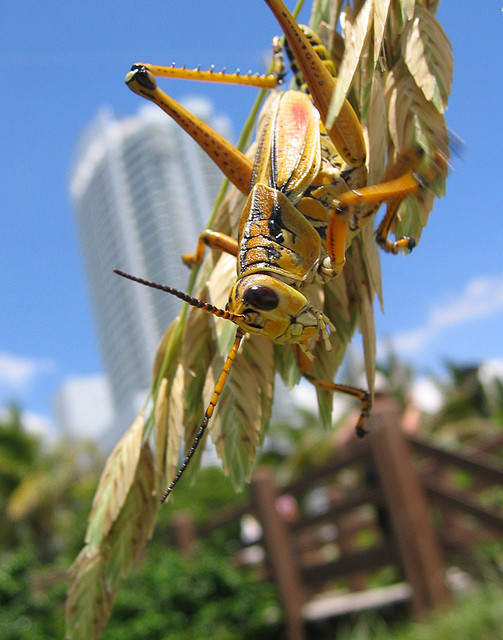 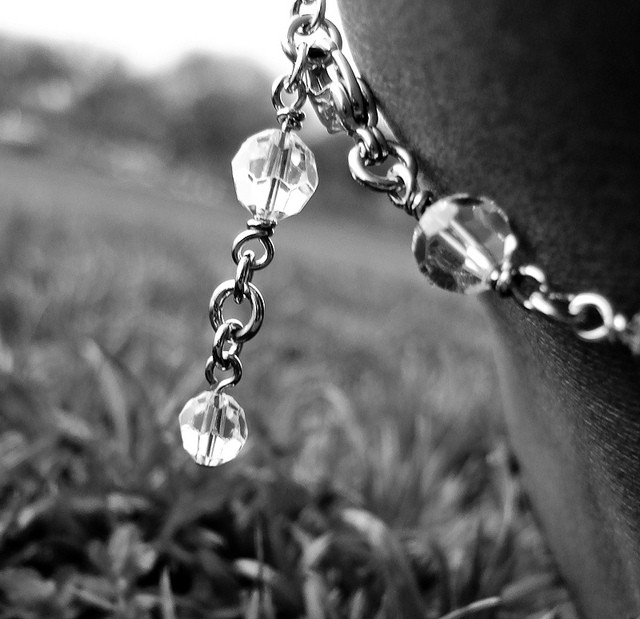 I had a short subject distance and ensured the background was both far away and not too busy looking.

In short, the answer is yes, it can be done, but... you either

In an answer to another question, I've listed some other techniques to achieve good background separation, most of which are usable with a point-and-shoot. These techniques use other tricks than shallow depth of field, so they might be off-topic for this question, but their intent is actually similar.

Simulating shallow depth in post processing is quite hard for many photos, because for realistic result you should use different amount of blur on different parts of photo based on how much off from focus plane they are - that's how it works in optics. Since a two-dimensional image does not contain such information, this cannot be done automatically. Also, bright areas and noise render differently in bokeh compared to blur.

So, artificial blurring is restricted to photos with simplistic composition (subject near, background far, low noise) or when the result does not have to look natural.

Blurring out the background is a function of the Depth of Field. The DoF itself is determined by several parameters, like the aperture and the sensor size. Since in a point-and-shoot camera the sensor size is significantly smaller than in the D90, you are not able to achieve the bokkeh that is possible with the Nikon.

You can use the dofmaster site to determine the possible DoF of your cameras.

Short answer: P&S cameras have a smaller sensor and generally smaller apertures as well, whereas bokeh (achieved by a shallow depth of field) "requires" a larger sensor and aperture. For a more in-depth explanation, see the answer by Eruditass.

Well, there are a few factors that control the DOF.

Okay, so it's bigger, why should you care? Well, if you attach the same lens to a smaller sensor, this sensor will collect a smaller portion of the image (like if you do a crop of the original image). And if you think about it, this means that it will be more zoomed in (yeah, think about it for a sec).

But you don't believe me, do you? You'll say that you have the same zoom (say 150 mm) on both cameras, right? Yeah, but that's because 150 mm on your camera is not the same as 150 mm on D90. Why not? I'll try to explain.
Like we said before, smaller sensor means more zoomed in picture. But when the photographers talk to each other, they want to say: "just put your camera to 120 mm" and they want it to mean the same no mather the sensor size. Otherwise they would first ask you for your sensor size, then compute the real mm length ;). So camera and lens makers now show the focal distance in relative terms of 35 mm equivalent focal length. Read about it here.

More expensive cameras have a smaller DOF (greater blur) because of (amongst other things) bigger sensors.

A bigger aperture has a shallower DOF. A bigger f number (f/5.6) is actually a smaller opening than a smaller f number (f/2.8) - see the divide sign? You actually devide the focal length by a certain number: thus a greater number, smaller aperture.

You have a lens on your HS10 that can be open up to f/2.8, if you are zoomed out. But if you zoom completely in then it can be opened to only f/5.6. But your brother may have a lens that can be more open at the same relative focal length. You didn't mention the aperture of both shots, but if you have a more open aperture on D90 then your pictures will have a shallower DOF.

More zoom means shallower DOF. It has to do with something called Circle of Confusion. Read about it here or on Google.

You can always use software to create bokeh. There are many different choices ranging from amateur filters to professional software. I suggest you do a search or start with a simple tutorial with PS here.

You can also use "Portrait" mode if your camera has one and get as close to your subject as you can -frame it as tight as possible to increase the background blur (you're more likely to get blur the closer you are, that's why you get blur when taking macros).

Portrait mode is designed to give background blur on most automatic cameras.

Macro distances really shrink depth of field, I'm afraid you won't be able to reproduce it on longer distances with a small-sensor camera. You can either fake it in Photoshop, or, if you're in darker environment, get something vaguely similar by setting long shutter speed, enabling flash and moving your camera during exposure. Flash will then make foreground sharp, while camera shake will smudge background. ("Night portrait" mode setting usually does something similar.)

Point-and-shoots and super-zooms typically have massive depth of field, which makes it very hard to blur the background. You need at least something like a Panasonic Lumix or Sony NEX (which advertises 'background defocus' as one of its USPs) to really have a decent chance of good results.

As far as post processing for a lower depth of field depending on the way the image is shot you might be able to get the effect by applying a gradient mask in photo shop and then using the blur effect with that.

This works pretty well for the sort of photos where you have something on a plane. For example if you are shooting a small item on a table and what that narrow depth of field effect. I don't think it works as well for creating bokeh in the background of a portrait.

Even if the camera has a broad depth of field, you can get the most out of it by focusing short of the foreground object, but keeping it inside that field of focus, at the far end of it.

For example, I had the same situation although with a fancier camera. I wanted to shoto moss hanging from a tree with the background greatly softened. Due to the light etc. I couldn't just crank open the aperture more. So I took a step toward the tree, focused on the mooss, then stepped back to snap the shutter. It takes trial and error and knowing your lens, and some luck.

Not the answer you're looking for? Browse other questions tagged point-and-shoot depth-of-field bokeh blur or ask your own question.

1
DOF, bokeh, Nikon P100
0
How to take bokeh photo with nikon coolpix s6300
1
How to get bokeh effect using compact camera?
-1
how to make this but for pictures instead of videos?
1
How to get blurry backlights but sharp focused front face
0
How to get the effect of blurred lights (bright light spots)?
0
Blur background with Nikon Coolpix B700
1
How to blur the background using a super-zoom camera?
1
Focus Effect for Canon Powershot SX520
0
How to take picture with blur background using FujiFilm HS10
See more linked questions