Ways to soften an onboard flash?

What can be done to soften the direct light from an onboard flash? I know there are diffusers available for external flash units, but I'm not aware of such a solution for an onboard flash, such as on a Nikon D50.

Both Gary Fong and Lumiquest make diffusers for pop-up flashes (and there are probably others as well that I don't know by brand). The Gary Fong version is called the Puffer; Lumiquest's is called Soft Screen. The Luniquest Soft Screen is much larger than the Puffer, but not a lot of the diffuser screen is going to be hit by the flash at its mounting distance.

Honestly, though, the best you can say about them is that they're better than nothing. You really can't get much softness from such a small flash so close to the lens without a system of mirrors to allow room for a large enough light source, and the loss of power would probably be unacceptable if you did manage to get a really soft source. (The D50 is not exactly a low-light, high-ISO champion.) Better than nothing is better than nothing, though, so as long as your expectations aren't too high and you use the flash where spillage from the diffuser will bounce for a bit of fill, you'll get better than the pop-up alone will give you.

Take a business card with white background and position it at 45 degrees in front of the popup flash. That will redirect it to the ceiling. For most flashes you can make two small cuts on the card to slide it into position and keep it supported by the flash itself.

Here is how it looks on my Canon DSLR: 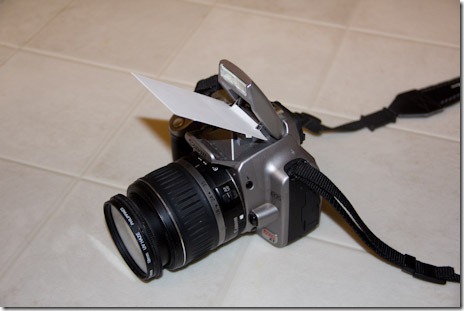 Commericially, there's the Gary Fong pop-up flash diffuser that works okay. You can also do a little bit of DIY when needed and use white paper in front of the flash. You can use that to diffuse or bounce, depending on the paper and its thickness. The Digital Photography School has an article that has some examples of the DIY options.

If I find myself in this situation, I use a Kleenex in a pinch. Just fold it over itself once, and lay it on top of the flash.

I just throw in a piece of cloth/paper on it. Handkerchief, small envelope, wax paper all work fine. Just remember to set the flash exposure compensation to properly expose the image.

I'll give you the same advice I've got when I asked about the pop up flash - don't spend any money on a popup flash diffuser, they are not very good and when you can get a new manual flash for $40 they are not worth the money (search for YN460 on eBay, there's also a TTL flash from the same company for under $70, I don't remember the model number).

Bounce it off the ceiling. Hope you have a ceiling... I've used wax paper also, you don't loose too much light that way.

The Nikon D50 has a hotshoe, get an external flash that lets you bounce.

You can read about bounce flash here.

And cool, you can use mirrors!

Don't forget flash exposure compensation. If you dial down the flash a bit and there is a bit of ambient light, you'll get less harsh direct light from the flash.

Not the answer you're looking for? Browse other questions tagged flash popup-flash or ask your own question.

7
Are there any tricks to make a pop-up flash suck less in low light?

17
How to get good results with the built-in popup flash?
12
Why is the D7000 commander mode flash firing during exposure when the manual says it won't?
4
What post-processing tricks can be used to improve the quality of photos taken with the on-camera flash?
2
Pop up flash & softbox headlight unit
0
What is the minimum cost “automatic” flash that I can sensibly use with a Nikon D700
3
Disadvantages of always setting flash sync to 1/320s (Auto FP)?
1
Are there any official flash extenders for macro work?
0
Can I use a Canon 430EX III-RT without firing a pop-up flash?
1
How do I activate the built-in flash on the Canon Powershot G5 X?
0
Is the flash on a Nikon D5600 supposed to pop up and fire automatically, if so what camera settings to achieve this