What can a fisheye lens be useful for?

I have a variety of lenses in my camera kit. One that I do not have, and has me curious, is a fisheye lens. I mostly understand what it does: it captures an image with distortion similar to what you see through a door's peephole.

Given the distortion, are there any particular types of shots for which a fisheye lens is useful?

When I started considering the purchase of a fisheye lens I was worried that I wouldn't use too often. Boy, was I wrong. I loved it so much that it actually gave me motivation to take more pictures and it grew to be my favorite lens. Unfortunately I had to sell it when I switched to a full frame camera and now I miss it a lot.

First of all let's start by clarifying that there are two types of fisheye lenses for SLR cameras:

Both types produce images that are significantly distorted but that is either is exactly what you want or it can be corrected with the software, but it certainly doesn't have to look as what you see through a door's peephole. Situation that I think a fisheye lens is useful are:

Bottom line is that I wish for Nikon to release a new FX size fisheye every day.

Back when I was a photographer at parties, I used my Tokina 10-17 fisheye ZOOM lens quite effectively to pack a bunch of people together with some scenery and a bit of a creative touch. The fisheye zoom had the advantage that you could make the effect bigger or smaller, depending on the occasion. I'm including some examples: 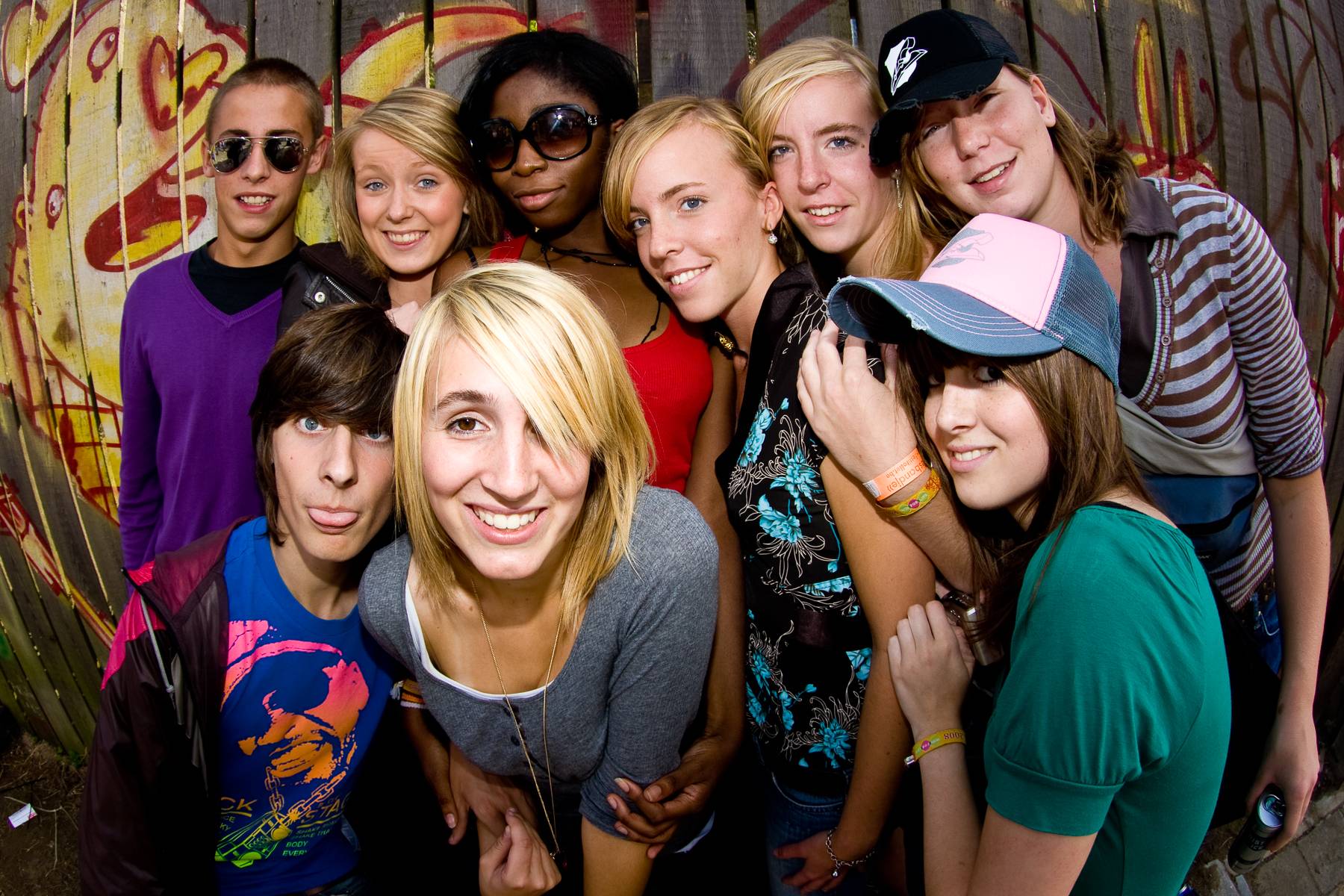 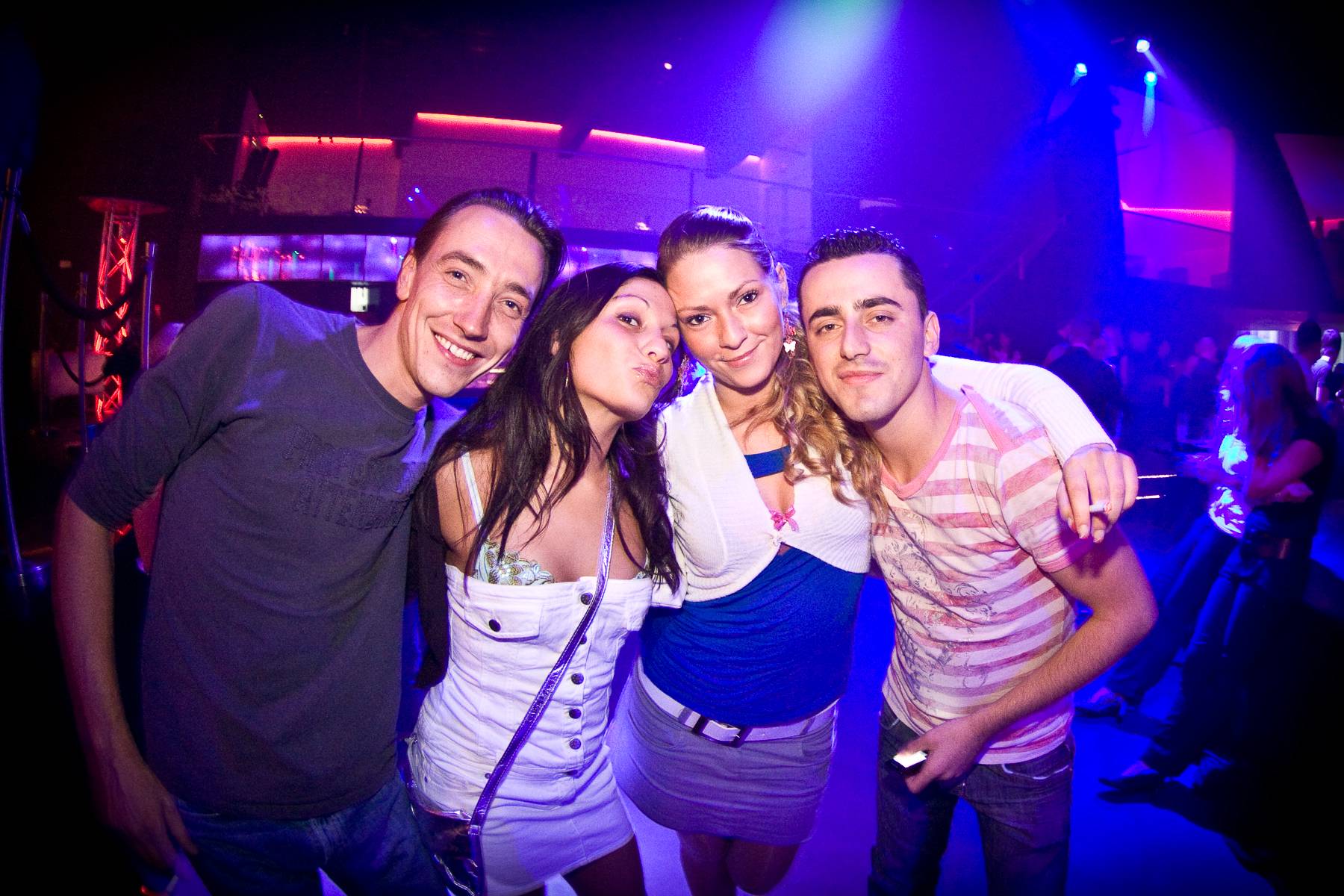 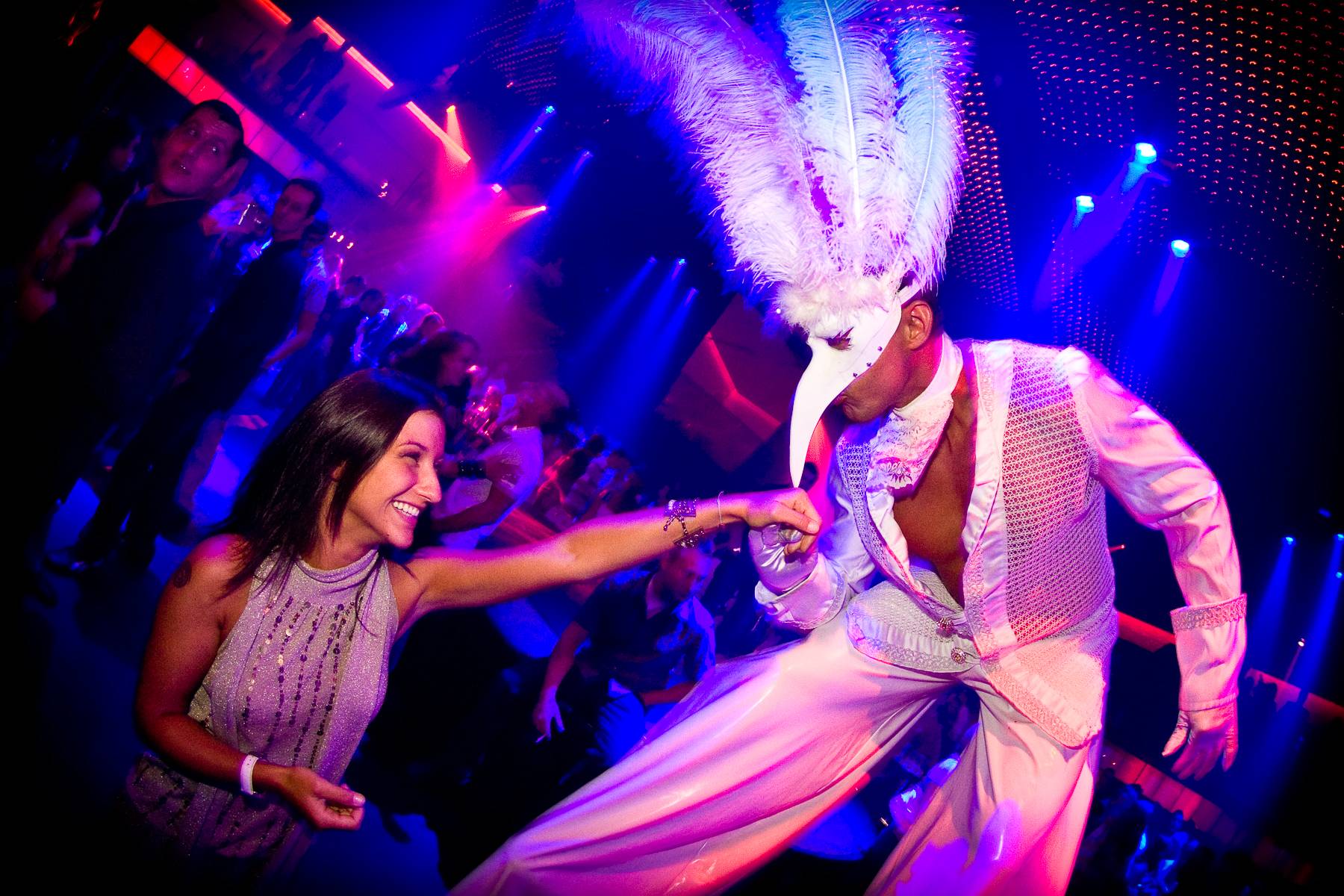 Fisheye lens can be used to pack together some kind of action with environment, and don't mind the distortion (examples: 1, 2). I've also seen some nice portraits done with fisheye, but that really depends on what you can come up with.

Or, you can get rid of the distortion by software conversion and use your fisheye an normal rectilinear ultra-wide lens. (If you don't mind the loss of quality and the fact it's hard to predict what's going to be in the picture after you convert and crop it.)

They are useful for those times when you absolutely want the subject to know you are taking a picture, unlike a telephoto where you can shoot anonymously. ;-)

Seriously, fisheyes have a number of real applications:

I carried a borrowed NIKKOR 10.5mm f/2.8G ED on a recent tour of Australian tourist spots. It stayed on the D90 for much more of the trip than I expected as I found opportunities to take pictures that would not have been possible with a more "normal" lens. I'd strongly suggest borrowing or renting on and trying it out on a casual outing. You might be surprised at the results.

Edit: Let me add a couple of notes about nodal points, the entrance pupil, and panorama stitching.

One definition of the entrance pupil is the following, from Wikipedia:

The geometric location of the entrance pupil is the vertex of the camera's angle of view and consequently its center of perspective, perspective point, view point, projection centre or no-parallax point. This point is important in panoramic photography, because the camera must be rotated around it in order to avoid parallax errors in the final, stitched panorama.

According to Wikipedia in the section on the Cardinal Points, the nodal points are locations along the optical axis that have the property that a light ray intersecting the front nodal point (and entering the lens) will leave the lens as if it originated at the rear nodal point.

The section goes on to identify some common misconceptions:

The nodal points are widely misunderstood in photography, where it is commonly asserted that the light rays "intersect" at "the nodal point", that the iris diaphragm of the lens is located there, and that this is the correct pivot point for panoramic photography, so as to avoid parallax error. These claims generally arise from confusion about the optics of camera lenses, as well as confusion between the nodal points and the other cardinal points of the system.

In short, multiple images destined for stitching into a panorama should all be taken with the entrance pupil in a fixed location, and only changing the direction the optical axis points.

Unfortunately, one of the interesting properties of a practical fish-eye lens is that the entrance pupil is at a changing distance along the optical axis as you vary the angle of the incident ray makes with the axis. You can see this effect by holding the lens with its rear element facing a bright wall (making the entrance pupil more visible at all) and moving your head around the front. As you move from on-axis to off-axis you can clearly see the pupil move from deep inside the lens to far in front of the rim of the front element. In order for rays to enter the lens from more than 90 degrees off axis, the pupil has to be visible to those rays. The surprise is that the pupil doesn't stay in that position as you move to smaller angles.

This effect does not happen with a normal rectilinear lens design. In rectilinear prime lenses, the entrance pupil is at a fixed location. You can identify that location by carefully constructing tests for parallax error. One of the compromises in a zoom lens design is that the position of the entrance pupil moves as the focal length changes. This is one of the reasons that the f-number of the lens varies with the zoom.

This makes it difficult to pick a proper point of rotation for a fisheye lens used for panorama photography. One answer is to just live with the natural field of view. After all, 180 degrees or more is pretty darn panoramic compared to a normal lens. Another answer is to use the approximate average position of the entrance pupil in the region where the individual images overlap. If you minimize the overlap, then you can calibrate the result fairly well. With a full-circle fisheye with a 190 degree or better field of view, you can cover the whole sphere with just two pictures, but you need to rotate the camera around a point that is very close to the front face of the front element for least parallax error in the overlapping band.

Seeing a very large field of view at once, in cases where distortion does not matter.
E.g. front doors and security cameras, where you want see what is going on from every angle at once (except behind you).

Fisheye lenses tend to be able to focus much closer than rectilinear wide angle lenses. This makes them suitable for wide-angle closeup shots which show small objects together with a not-too-blurry background. You can use a fisheye to photograph small animals in their environment, rather than isolating them.

You can see examples of such photos (taken with fisheye lenses) here:

For wide-angle macro shots, some people use a teleconverters with fisheyes to decrease the field of view and increase magnification. Alternatively one might use a fisheye zoom lens such as the Tokina 10-17 mm.

When the subject matter is far away, the distortion in a fish-eye lens is minimized. However, sometimes you can make use of that distortion to create a more exaggerated and cartoony photograph.

For instance, here's a photo where I used a fish-eye to force the normally straight grill lines of a truck into a curve, resembling a smile. Forcing in that anthropomorphic nature, as well as the over-saturated post-processing, brings the photo a bit out of reality: 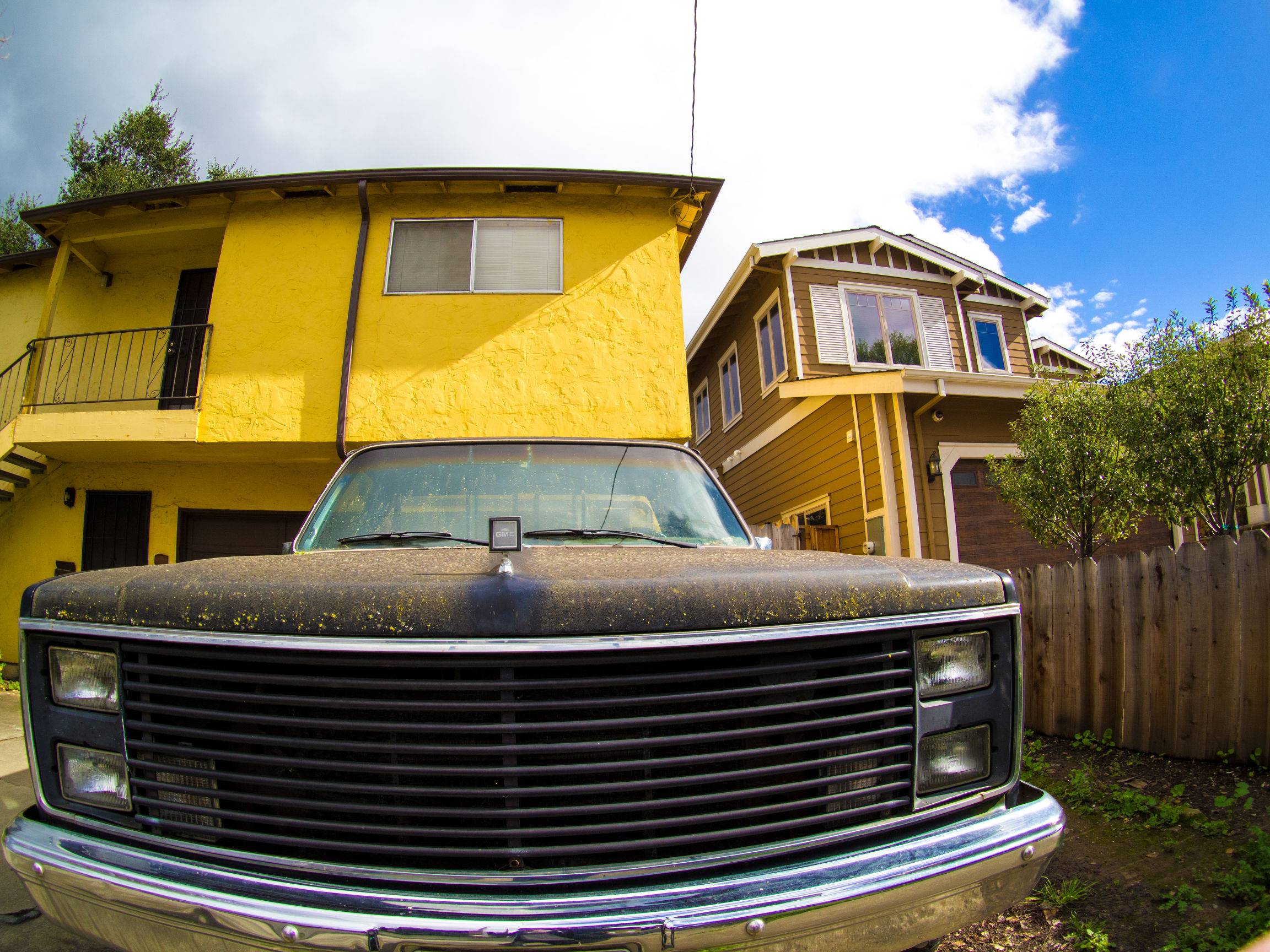 Landscapes, parties, small rooms, big rooms, churches, the uses go on. Keep the horizon in the middle for most of the distortion to be in the corners. Look up or down to bring on the distortion. It takes some practice - what doesn't? - but fisheyes allow you to capture an eyefull. I can recommend both the nikon 10.5 and the sigma 15.

Some fisheyes have low Minimum Shooting Distances, e.g., the Walimex/Samyang 7.5mm fisheye for Micro Four Thirds has one of d=9 cm. So you can get quite close to your—preferably organically shaped—subject to get some really unusual, almost macro-like viewpoints. May be nice for creative photography. I plan to get one of these lenses.

Not the answer you're looking for? Browse other questions tagged lens fisheye or ask your own question.

1
Fish-eye effect utility
14
How should I plan for taking panoramas from rooftops?
1
How to capture globe-shaped photograph?
0
Samyang 8mm vs Tokina 11-16

11
What are Barrel and Pincushion distortion and how are they corrected?
7
Is pincushion or barrel distortion really all that bad in a lens?
9
What are the standard tests available to quantify lens parameters?
4
Differences between canon 17-85mm and 18-55mm
5
Categorization of 14mm lens as rectilinear?
2
How does a manual lens know when to adjust the aperture?
0
With a Full-Frame Camera, will a Full-Frame Fisheye Lens produce a Circular Image?
3
Use a fisheye lens on APS-C camera as ultra wide angle
1
What wide-angle lens for MFT?