What pancake lenses are available for Sony NEX camera?

As a DSLR owner, I am currently looking for a compact interchangeable lens camera and I currently hesitate in buying the Sony NEX-5N or the Panasonic GX1.

I realize the lens options for the Micro Four Thirds cameras are great, and are somewhat limited for the NEX cameras.

Apart from the Sony NEX 16mm f/2,8, do I have other options for a pancake lens?

As Sony works to expand their system, they've introduced a few more pancake lenses. You can see the entire lens lineup on Sony's E-mount Lenses page. Of these as of 2013, there are two "real" pancake primes plus a collapsing zoom lens which reasonably could be categorized the same way.

The 16mm was widely panned (um, slight pun intended; sorry) by reviewers. For example, SLR Gear says: "It's an interesting little lens, but its price point and its performance are perhaps limiting it to strictly consumer application." The 20mm is new enough that it's not widely reviews, but a common presumption is that a second pancake so similar in focal length could only be to quietly answer those complaints. The MTF chart in the Sony info page linked above certainly looks much better, and unless you have a very compelling need for your lens to be a little bit wider (about 12° horizontally), it's probably worth the extra $100.

There aren't currently any third-party E-mount lenses which could be considered pancakes. It would be pretty silly to use an adapter to mount a DSLR pancake (for example, the Pentax 40mm f/2.8), because the size of the adapter would dwarf the lens, but adapters to Micro Four Thirds appear to be available and are pretty small (only adding 2mm), meaning you could use pancake lenses for that system if you don't mind manual focus. (That'd probably also be a little silly, but if you've got multiple systems, access to the lenses, etc., it could be an option.)

Some lenses meant for other mounts can be used with help of adapters. For example, Zeiss Planar 35/2 for Contax G. With a Pentax adapter, you could use the Pentax DA Limited line pancakes (21mm, 40mm and 70mm). Pentax, Canon or Nikon adapter would let you use Voigtländer's Ultron 40mm f/2 or Color Skopar 20mm f/3.5 with corresponding mount.

There are extremely thin pinhole lenses for Sony NEX cameras that you can easily find online. These are the thinnest NEX-native lenses that you will find. 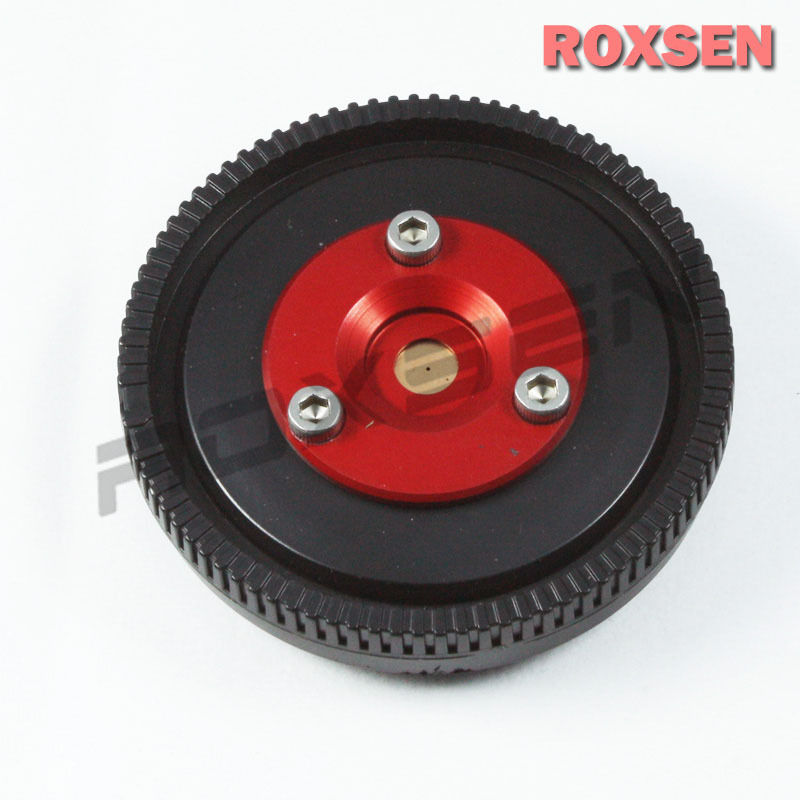 Then there are manual lenses that you can adapt, such as the 38mm Olympus 2.8 lens, whose adapter to NEX isn't that thick. This would be the definite best option for you I think. This is pretty much how it would look like (but with a NEX instead of the Olympus). 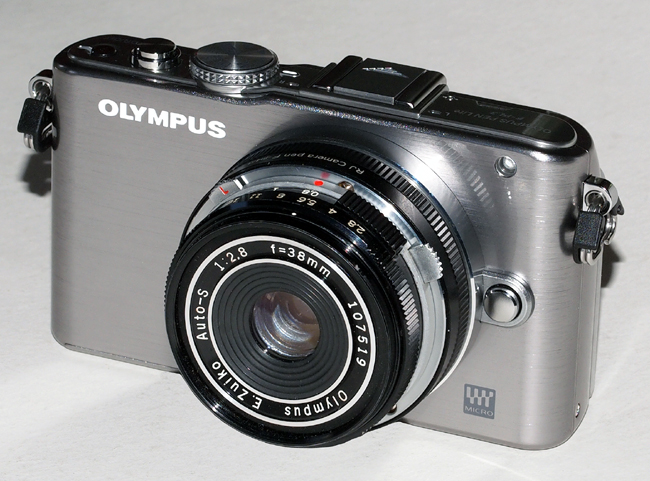 There are also three Pentax lenses I am thinking about, SMC PENTAX 40mm 2.8 Pancake lens (exists in all types of Pentax mounts). At your own risk, you can look into mounting this lens on your NEX. Note that the Pentax / Nex adapters are somewhat thicker/larger than the ones of the NEX, so it would be worthy only with a very thin lens. 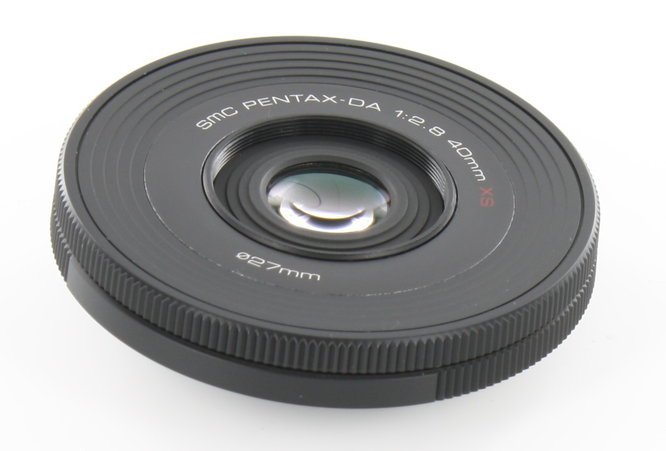 An Industar 69 (or 50-2, or 22) on an adapter would also be very thin, but these lenses are quite often very bad (somewhat similar to what's seen here). 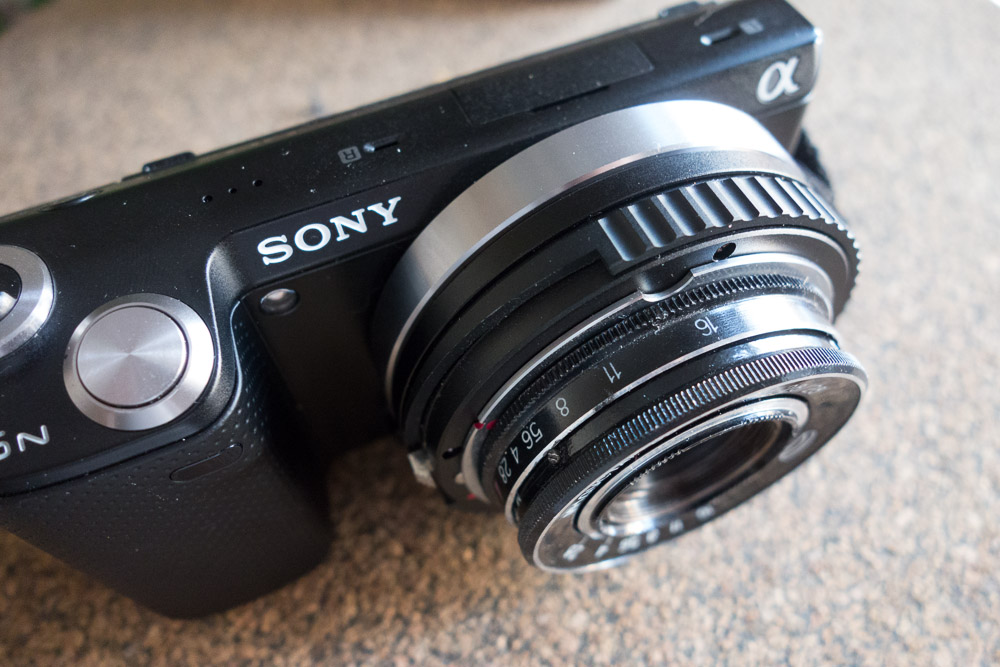 Unfortunately in the mirrorless world only within the micro 4/3 standards you will find a good lens range even 3rd party ones.

In the Sony realm there are no other options for pancake lens as they have a unique system, so you can't use the micro 4/3 as you seem to know already.

To help you choose I leave here a site that I follow which publishes new, reviews and rumors about mirrorless cameras and they recently have published a post that might interest you a lot - http://www.43rumors.com/panasonic-gx1-review-at-techradar-and-nex-5n-comparison/

In the end if you are looking to aquire more gear later for the camera or even use adaptors for the DSLR gear that you might have I think you'll be better served with the GX1. On image quality the Sony is generally better although in lower ISO's as they say, in the review, that the difference between both cameras is pretty unnoticeable.

I use the Sony 20mm pancake lens for Nex on my NexC3. This gives me a good compromise (30mm equivalent) between a wide angle 28mm and a 35mm, and the set-up is marvellously small. IQ very good.

Not the answer you're looking for? Browse other questions tagged lens sony-nex or ask your own question.

17
How do lens lineups vary across Mirrorless camera systems?

18
Is gallery quality possible with a mirrorless camera?
3
What 3D lenses are available for a Sony NEX camera?
5
What Micro-Four Thirds prime lenses produce pleasing bokeh?
17
How do lens lineups vary across Mirrorless camera systems?
8
Does sensor size dictate lens size with all other things equal?
2
Am I correct that photos from the 16-50 lens won't be much better than cropping photos from the 35mm prime?
3
Do focal length changing lens adapters affect the F-stop of a lens?
4
Are Sony NEX and Sony Alpha lenses interchangeable?
0
Which Lens Should I Use For A Single Lens Solution On Sony a6500?