My old Pentax lenses have a small white dome between the aperture ring and the focus ring. See the photo below: 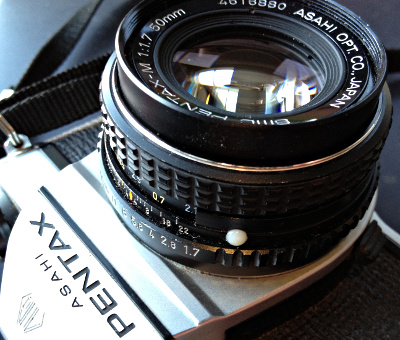 The clear white dome calls to mind the larger white plastic domes used in light meters, but there's no such thing in this lens (and that'd be a very strange place for one). You can't press it or anything; it's not a button or control. It's just a white plastic bead half-embedded in the metal. It's common to many or most Pentax manual focus lenses (take a look at any of the K or M primes shown here); I haven't seen it elsewhere.

This dome is on a part of the lens body which does not move. It lines up with f/1.7 when the aperture is set to f/16, or f/2 (unmarked) when the aperture is set to f/22. It's not in a place where it seems likely to provide any meaningful tactile feedback — in fact, when holding the camera in use, I'd characterize it as "out of the way". And it's offset from the orange dot used for mount alignment, so it's not that either.

So, what is it there for? It can't be just to look pretty, can it? It's not very pretty.

As stated here ( and guessed by Dreamager) it is aligned with the lens release button of older Pentax cameras. It's much easier to change the lens in the dark. ( I don't really understand the advantage of the newer orange dots. )

In the dark, when red dots are difficult to see, align the white plastic bump on the lens barrel with the lens release lever by touch.

Not the answer you're looking for? Browse other questions tagged lens pentax old-lenses or ask your own question.

3
What is the small yellow/white "hemisphere" near the aperture scale on some Pentax lenses?

19
Can I use old Pentax lenses on newer Pentax DSLRs?
8
Are the contacts on different extension tubes in Soligor Pentax AF set supposed to be different?
1
Will old K-mount lenses have the same field of view on Pentax K01?
1
Using old, manual focus lenses with a new Pentax DSLR
1
Why do I see focus less accurately in my DSLR's viewfinder and screen with old lenses?
1
Why did Pentax change to open-aperture metering when this causes the need to stop-down for old lenses?
5
What is this Angenieux lens?
2
Pentax DSLR stopped accepting manual lenses
1
How to find a camera compatible with old Sigma lenses that were used with Pentax MZ50 SLR?