Is it possible for a lens to produce too much contrast?

I came across a complaint that a certain lens produces too much contrast. The lens was described as rendering "cartoonish" contrast when shooting a portrait with diffused light from a window, where other lenses are said to give a soft transition of light. The claim is that the lens eliminates midtones. The argument continues that contrast can be increased in post-production, but, like adding salt to soup, you can't really go back if there's too much.

Now, as I understand it, this isn't the way it works; when a lens is said to produce good contrast, this is about microcontrast and is really more related to resolution than to overall tonal rendering. Poor lens designs can reduce overall contrast by allowing stray light (flare or veiling glare), but that's uniformly a bad thing — it's not a tunable with a sweet spot which can go too far. Contrast in a print (or global contrast in an image file) can certainly be over-done, but that's a totally different thing.

Photographer and writer Kirk Tuck, who generally knows what he's talking about, makes a similar complaint in this hands-on lens review:

So, in lens design, given lower resolutions from the last three generations of digital imagers, coupled with acutance robbing anti-aliasing filters, camera makers started creating lenses that added snap and sparkle back in at the expense of longer tonal ranging and high resolution rendering.

So, is there something to this complaint? Is this really a possible flaw in a lens? Can a lens "eliminate midtones"? Can lenses have too much global contrast — or, too much microcontrast after all?

After some research, I think I understand what's behind the complaint. It's not completely crazy, but it's not exactly based on a full understanding either.

The older lens designs allow more veiling glare — stray light. This reduces shadow detail, and makes the blackest blacks less black. (Hence, "veiled".) The JPEG processor, however, sets a black point such that the almost-blacks are rendered as absolute. This is independent of the exposure of the highlights — the stray light applies there as well. Then, the midtones may indeed appear expanded (with more "soft transitions") simply because the black point is set higher.

So, given the exact same camera settings, the older lens may produce a digital image which appears more delicate. The thing is, this comes at the expense of shadow detail, and crucially, one can easily get this lower-contrast effect from a lens with better overall contrast (that is, less stray light) simply by opting to cut out the shadow detail.

So, if you have a more modern lens and want to get a "look" more like that from older designs, you may indeed want to change the settings a little bit, either in your RAW workflow or in the in-camera JPEG processing. Experiment with turning down the overall contrast and shadow contrast in the tone curves and you may get results you like better. You may also want to underexpose a bit more than you would otherwise, and then "push" in RAW processing, setting a black point so the more noisy shadow detail is cut out and focusing on getting the mid-tones as you like.

This isn't to imply that the new designs necessarily require more work to get this look, by the way — a key aspect of the complaint. You just need an appropriate preset, which should be pretty easy to do with most modern cameras or RAW processing software. The lens which controls the stray light gives you more flexibility here, since you can't create the missing detail to get more dynamic range from the older lens designs.

You haven't said whether it is film or digital or given any details of lens or camera type/size/brand. Poor quality film (or film stored or used on poor quality conditions) can affect contrast a lot too. In addition many digital cameras automatically apply a sharpening effect as digital sensors are inherently 'blurry', if the settings of the camera have this turned up (which the cheaper ones tend to do) then the resulting image can have that 'cartoony' look due to the excessive sharpening.

Never heard of a lens having that effect though.

As you say, the complaint was made in context of portraiture - where good microcontrast means all the details of skin will become obvious, and that's rarely a desired property. So yes, a lens can have too much (micro)contrast for portraiture.

Here's a comparison of 100% crop of SOOC portrait and the same crop with microcontrast digitally increased exceeding any borders of good taste in the name of achieving a cartoonish effect (using Unsharp mask; do not try this at home with a female portrait): 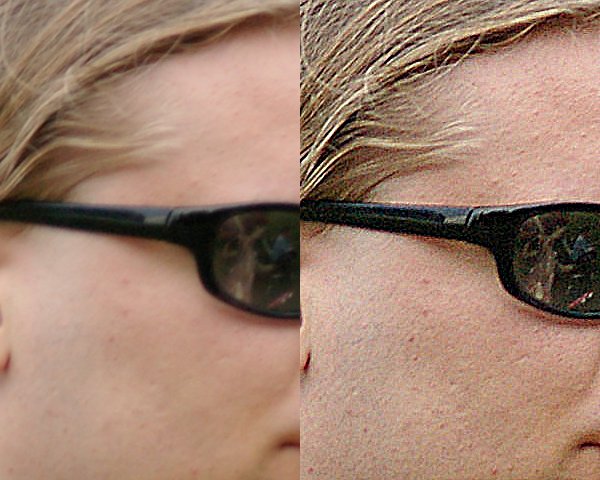 Lens contrast can be reduced by using a softening filter.

Technically, a lens doesn't produce any contrast, ever. It will allow the sensor or film to record existing contrast to a greater or smaller degree. As Imre points out, for some purposes that degree of contrast might not be desirable for the purpose you're trying to achieve, in which case the recorded or transmitted contrast can be artificially reduced either pre- or post- recording using photographic filters, filters in software (either in camera or on a computer, by placing filters in an enlarger, or by manipulating the development process of either the film or prints. Even the choice of paper when printing can play a role here.

Not the answer you're looking for? Browse other questions tagged lens image-quality optics contrast or ask your own question.

50
What image-quality characteristics make a lens good or bad?
20
What is "micro contrast" and how is it different from regular contrast?
11
How do lenses vary in contrast?
3
Does using a different lens affect the dynamic range for HDR post-processing?

20
How does a circular lens produce rectangular shots?
19
How much contrast should I have?
11
What options do I have for a normal and fast prime lens for a Canon APS-C camera?
6
For MTF, why does 10 represent contrast while 30 represent resolution?
5
How do anamorphic lenses produce lens flare "streaks"?
0
DSLR setting for a good contrast, sharper picture?
4
Lanyard colours which are both high contrast and suitable for colour blind attendees
1
Is it theoretically possible to use a mirrorless lens for a smartphone camera?
0
In general, should I expect better image quality from a 24-70mm f/2.8 lens than from a 24-105mm f/4 lens?