How do I get over my shyness when taking photos of strangers?

Yesterday I went to out for taking pictures and I passed a market. The scene was beautiful seeing peoples selling foods, other peoples trading about price etc etc...

I would have loved to take photos of it, but I was too shy (as I think it's not polite) to shoot photos of them.

What do you do, when you are facing such situations?

Become a super spy photographer. It is a filter attachment that allows you to shoot around corners, or look like you are photographing somewhere else. Available from Photojojo. 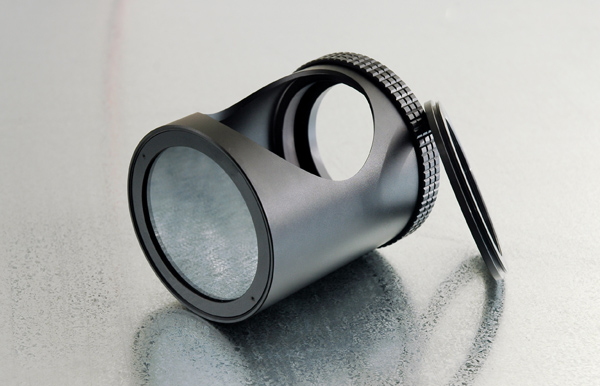 I know it is hard approaching people, but if you are polite, 9/10 people would be okay with it. If they do have a problem with it, go to the next market stall. Having a business card that says you are a photographer would also help.

Most people take it as a compliment that you want to photograph them.

If they ask, reassure them that you aren't going to use the images for anything detrimental.

If it is a private market, you may need to get release forms (depends on your location, and the intention of the photo).

First of all asking before taking a shot often ruins the natural scene you want to capture so don't do it. Best way I have found is to use a fairly long lens so you can take the shot from some distance (this is the reason many photo journalists use 70-200 lenses). You may be noticed but because your a good distance away the subject is rarely too affected by your presence. If your presence is met with concerned looks the best thing to do is smile broadly before moving on. This tends to put your subject at ease. Very occasionally you will get someone that really does not like being photographed but this is very rare and in those instances a quick chat will normally calm everything down. If you feel shy about taking these types of photographs then the only solution is to just get in there and start doing it. The more often you do the more comfortable you will become in these scenarios. The more you push the boundaries of your comfort zone the larger your comfort zone will become.

I've just started doing a 100 Strangers project in order to improve my (non-existent) portrait skills. Basically you have to go up people you've never met before and ask to take their picture (you can see the results so far on my Flickr stream.

My experience so far is that most people don't mind you asking. I asked about 15 people on Saturday and only one said no. Most people either said yes immediately or asked why, and when I explained where more than happy to help. I think a lot of it is down to where you ask. For example, if you ask in a busy shopping area then people are more likely to say no as they're in a rush. If you go somewhere where people are being more casual then they'll be more willing to stop for a couple of minutes and let you click away.

I had some business cards printed up which said "100 Strangers Project" and included my name, email address and Flickr stream url. I showed these to people when they asked why, and handed them out to people so that they could look at the shots I'd taken. This goes down pretty well and make the whole event seem less odd!! 100strangers joint Flickr photostream here

You can use a wide angle lens as noted before. People won't be able to tell if you're pointing the camera at them, and when you're done with the photograph and lower the camera, just pretend to keep on looking on something behind the subject. 100% of the time they will just assume that was the case.

Other "technique" that I use is to frame the picture, before the subject enters it. Then you just wait and shoot when you want. The problem with this approach is that a lot of people will wait till you're done or try to pass behind you to not interfere with the image you're taking.

I don't recommend using tele lenses, in general they're bigger and make you more obtrusive and intimidating, and people can tell you're pointing the camera directly at them. I also tend to enjoy more the results of a wide angle since it will draw you more into the action that the tele which looks more detached.

In general I would say that anything that might make you feel more sneaky and concealed (hip shooting, spy lenses, etc.) will make you more conspicuous and will backfire. Don't pretend you're not shooting, advertise it.

Keep in mind you have to be REAL close with a wide angle to get good results.

Another thing (sorry for the lenghty answer), It's not the same to shoot a crowded spot where people pretend to ignore each other business, than a lonely street when you might come across way less people. In general is really hard to shoot people in the latter case, they will notice and they might confront you. It's different and you'll need more "face" to do it. So start in crowded places.

David Weintraub actually has some of the best answers to that: Overcoming Shyness in Photographing People. He suggests that most people are flattered at being photographed, especially once you explain what you are doing, and with experience you'll gain confidence in approaching people.

First, make sure you know that photography is perceived harmless the country you're in. In some cultures, taking a picture equals to taking the soul and you probably don't mean to do that.

One trick my friend used was to hold camera constantly at eye and start shooting away without paying too much attention to framing. Start with easier subjects, such as buildings or familiar people, and include strangers when you're comfortable with that. It will also give time for people around to get used to you. When they see you're shooting away like a lunatic, they'll soon ignore you and move on. Now you can start to care about framing. and choosing what to shoot. Just don't put the camera down, it's easier to stay in flow when you don't have to lift it.

It might help to remember that you're on an assignment from open university course and the deadline is tonight. The course is held by most merciless teacher ever - yourself.

There are a few different approaches:

** I got a really nice picture that way once, here it is: 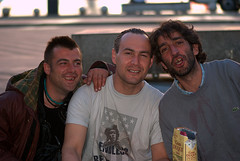 The biggest problem with asking people beforehand is that you usually spoil the scene you were trying to capture. Unless, of course, that you actually wanted a posed portrait.

If that's the case, then approaching the subject and asking is the way to go. To overcome your shyness in this case, it's probably best to build up by asking people you know and gradually move to strangers. For example, start asking acquaintances or work colleagues, move to strangers in your city and build up to eventually ask people on a foreign country where you may not even know the language.

For candid shots, the dilemma is that you can't ask beforehand, you have to steal the shot. In this case the shyness is probably related to (i) fear of getting caught or (ii) uncertainty about whether you should be stealing a picture in the first place.

That simply makes the whole point much easier because you can look your subjects in the eye, smiling and use body language to put them at ease. As commented previously, different cultures will face this differently be aware of where you are, how you are seen and the body language you use.

If confronted agressively, keep your cool, apologise and delete the picture if asked.

All in all, the best way to overcome it is leaving your comfort zone one step at a time and progressing on it.

I think the spy lens is really cool! My personal opinion would be to just politely ask if it works for them that you can take their photograph. It's just surprising how many people just say yes!

Also it depends on what sort of scene you want to capture. If the person will be the main subject of the photo then I would definitely seek permission as it can be really impolite and invasion of privacy.

On the other hand if the person is not the main focus then I just let it be because it is as good as you capturing a landscape :)

It also varies from country to country, for example I come from India and people generally agree to be clicked; in fact they actually pose for the photographs.

As a former newspaper reporter/photographer, having an assignment can be a powerful motivator. :-)

Assuming you can't or don't want to work as an unpaid "stringer" for a local newspaper, maybe you can find a Flickr group or something similar where there are voluntary assignments or projects that the members are encouraged to participate in. That way you can go up to someone and say, "Hi, my name is Foo and I'm working on a photography project about bar for the baz group -- would you mind me taking your picture?". That kind of introduction helps explain why you want to take the picture and can make you seem less intrusive.

Or give yourself a project, like the "Humans of New York" person (people?).

The hard part is balancing "I'm interested in you and this community, I'm not just here as a voyeur" and "I'm wasting your time with lots of questions to make me feel more comfortable about taking your picture". You do get better results if you come across as human, but not everyone wants to be interviewed.

If this doesn't sound easy, it isn't, but with practice you can be more comfortable with approaching people and discovering your way to do it.

Also ... accept that you have your reasons to think/feel it is inappropriate, and that other photographers think/feel differently about it.

Trying to ignore what you consider your own good judgement on YOUR behaviour can, if successful, easily land you in a spot you didn't want to be in. Also, behaving in a way of "I know it's against my values but fuck it!" tends to actually make people alarmed.

I'd jump into the deep end. Approaching people is a life skill that is very valuable. Grab yourself a 35mm and do some head shots!

Getting over nervousness or anxiety is never easy - pull your pants up and adjust your belt and go at it! Experience is the only way it'll get easier! You'll create your own path for opening your relationships with your subjects - one of the things I think makes being a photographer - the photo you illicit!

Not the answer you're looking for? Browse other questions tagged street-photography people or ask your own question.

77
How can I get my portrait subjects to look natural and drop the cheesy smile?
23
How do you get the eyes extremely sharp in the photo?
5
How do I get regular people to relax and not to overprepare having their portrait taken?
0
How do you get this gritty, grainy effect?
0
How do I choose a prime lens to get blurred backgrounds for full-body street photography shots?
10
How to best explain that you are taking pictures in a space for practice reasons?