Why is depth of field affected by focal length?

As the focal length decreases, the depth of field increases as well. Why is this? I'm not so much interested in a physics lesson as I am interested in a simple, down-to-earth explanation.

Pretty sure I answered this one before but I cannot find it.

This is a little oversimplified but I hope it is easy to visualize at least.

For this discussion, the aperture should be considered the same, since the variance we're discussing is focal length.

So, a telephoto lens focussed on the same subject from the same distance as a wide angle lens will have shallower depth of a field as a result of higher magnification, but the angle of view between the two images is vastly different as a result. A telephoto lens and a wide angle lens focussed on the same subject with the same angle of view, will have the same depth of field (there is variation but it is negligable).

The difference here? angle of view. So, this is about your distance to the subject, really, not specifically the focal length. Vary the distance to accomodate the differences in focal length and the depth of field remains virtually the same. What does change, though is the foreground and background ratios for it. Wider angles tend to have more of the background in focus and telephotos tend have more of the foreground. The result of this behaviour can create an illusion of shallower depth as the telephoto would magnify the background blur. That's one reason that landscape photographers don't stand way back with a telephoto (haze and other factors would also play a role, probably more significantly).

In summary, wide angle lenses do not have more depth of field than telephoto lenses and this is demonstrated by both showing the same DoF for the same angle of view.

You can get some more detailed (and not math oriented) explanations at Cambridge in Colour and Luminous Landscape. The second link has sample images too, kind of handy for visually seeing it.

For any given f-stop value, the longer the focal length, the larger the actual aperture size in mm.

F stop is the ratio of aperture to focal length and is calculated by f-stop = focal-length / aperture.

The aperture size being the size of the hole the light passes through. To build a 100mm f1.4 lens, a 70mm aperture is required, which makes a really large diameter lens.

F-stop was invented to make the calculation of exposure brightness easier, but complicates actually calculating depth of field. But before automatic cameras, calculating the desired f-stop and shutter speed was workable, but would have been a real pain if working with actual aperture size!

Note: As some others answers have discussed, as the distance to a subject increases, then the light from that subject will be more parallel. This means the further away a subject is the greater the depth of field. This will counter the effect of the longer lens with same f stop having a smaller depth of field. Consider the 50mm and and 100mm f1.4 lenses. The 100mm has a larger aperture size in mm, but if you have to move 2x further away to take the photo, the increased distance will counter increased actual aperture size and the depth of field will be similar as using the 50mm lens at a closer distance.

Why do longer lenses have shallower dof ... in short, because they require physically bigger apertures to maintain the same f-stop number. (remember, the f stop value "f" = focal length / aperture.

Let's start by thinking about a true pinhole camera. It has no lens so no focal length and requires a really small pinhole to make a decent focussed image. if the pinhole is too big then nothing will be in focus. (ie seriously shallow dof !)

Now, if we put a lens in front of our pinhole box, we need to open up the aperture a bit so as to let enough light through - without diffracting our image. (remember we have to keep the image focused and the wavelengths of light are set by the laws of physics).

So, as the lens gets longer (while projecting onto the same sensor) it gets proportionately narrower in terms of its length relative to the size of its back end. (remember same size sensor) - this makes the lens darker. So to make it comparable to the light capturing ability of the shorter lens (ie same f=stop value) the aperture must be increased (to let more light through to the sensor) in proportion to the change in length.

As this progresses, the physical size of the aperture (in mm) is increasing in relation to the size of the sensor. So (remember the oversized pinhole) it gets much harder to keep things in focus. Hence longer fl lenses with wide apertures are complex, usually large in size and often much more expensive.

This is a great question! I have been at this stuff for more than 65 years and I have yet to read what I think is a respectable answered. To this end I challenge my peers to post a good explanation.

But wait, I think I have had enlightenment – anyway let me give it a go.

The lens projects an image of the outside world onto the surface of film or digital sensor. If you closely examine this image, you will find that it consists of countless circles, each varying in intensity and color. When we observe or capture this image, it will appear to be uniform and tack sharp only if these circles are too small to be perceived. We are talking about circles of confusion. So named, because under the microscope they are seen as ill-defined and they overlap. Nevertheless, when viewed from a suitable distance, we recognize that they merge to form a good-looking image.

When we think about the size of these circles, sooner or later, it dawns that the working diameter of the iris diaphragm (the aperture) will set the stage as to how big these circles are when projected on the surface at the focal plane of our camera.

Now we know that if we set our camera to f/11 or f/16 or f/22 we are shrinking down the working diameter of the camera’s aperture. In doing so, we gain depth-of-field because the outcome is smaller circles of confusion. Now the f-number and the focal length are intertwined. The f-number is derived by dividing the focal length by the working diameter of the lens. Suppose you mount a 50mm and set the f-number to f/16. The working aperture diameter is 50 ÷ 16 = 3.125mm. Such a lash-up delivers respectable depth-of-field, because the circles of confusion at the image plane will be tiny, provided the camera is focused accurately.

Now switch to a 28mm wide-angle. If the shutter speed and ISO are held constant, the same aperture setting of f/16 does this deed. However what has happened to the working diameter of the iris diaphragm to achieve f-16? The revised working diameter becomes 28 ÷ 16 = 1.75mm.

It’s that simple --- shorter focal length at the same f-number yields smaller working aperture, and this results in a smaller circle of confusion -- thus the span of depth of field expands.

Everything has plusses and minuses. If the working diameter becomes super small, the result will be infinite depth-of-field. The minus is: The twin demons of diffraction and interference step in and the image degrades.

Factorial – Maximum sharpness will occur when the camera lens is approximately stopped down two f-stops from maximum (wide-open).

A pretty simple yet good explanation is as following: 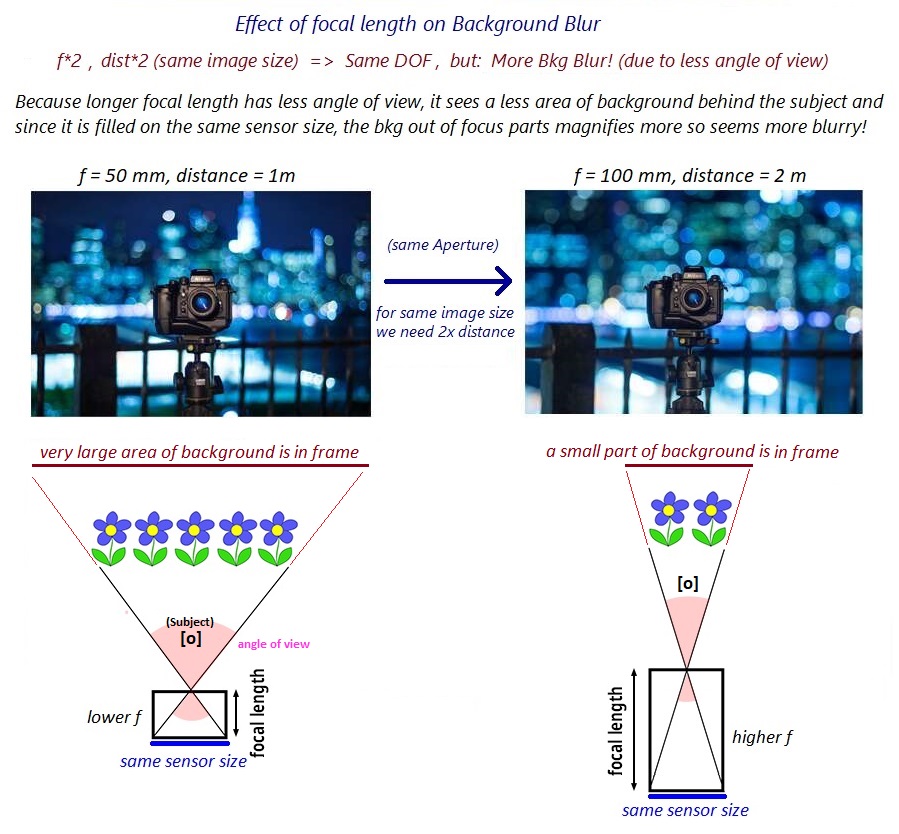 Note that to have same image size of an object in the frame when we double the focal length, we should also double the distance to subject. Although, this does not matter directly here but this is only required for better comparison. Anyway, the background will be more blur with higher f.

Not the answer you're looking for? Browse other questions tagged depth-of-field focal-length optics or ask your own question.