How to get a miniature effect on pictures without special equipment?

I was browsing Behance and came upon these pictures: http://www.behance.net/gallery/The-Little-Things/402879

I was wondering how he got this miniature style effect? I'm guessing a Gaussian Blur on a strip of the picture in Photoshop...but couldn't get right. What's the step-by-step process for doing this with software?

(For getting this effect with a special lens, see What's the best way to create a tilt-shift photograph?)

Basically you want to simulate the shallow depth of field you would get when photographing small objects. This can be done either with lens with tilt function (i.e. special purpose lens called either a tilt-shift or perspective control lens) or by selectively blurring an image in post.

It's not hard to do, but there is something you need to ensure in the original capture, and that is a high vantage point. This is a must, not only are most miniatures shot from above, but you need a steadily progressing depth from top to bottom. This is especially true when using a tilt-shift lens as your only option is a gradually increasing blur, it's possible to fake shallow depth of field from a ground level image but you would have to do an awful lot of very difficult masking if the furthest part of your scene is in the centre of the image, and the result wont look as good anyway.

Here's a walkthrough of one of these I produced for the University of York magazine. Here's the original image (actually part of a panorama) shot from the back of a tower crane!

Next I played with the saturation and colours to make it look a bit like a model (if you look at model railways the trees are always an unnatural shade of green!)

The next few steps are not strictly necessary but I wanted to push the illusion of this being a model as far as I could! I photoshopped in in some dirt, hairs etc. and a few plastic model railway figures (again most of this was inspired by studying images of model railways on flickr):

When doing this sort of thing it's important to add a shadow, even if very diffuse (the whole scene was shot on a cloudy day, so there were no strong shadows) to help ground the figures:

Here's the final prep'ed image (I decided the dead fly was too much!)

Now to do the actual blurring, now we want to simulate the model going out of focus, which means blurring with an increasing radius from top to bottom. The best way to achieve this is with the photoshop lens blur filter. This takes a "depth map" image, which is a greyscale image where the brightness indicates the radius of the blur at that point.

A simple gradient from top to bottom would do, but it gave the effect that the bottom of the building was more blurred than the top, which wouldn't happen in real life as they would both be at the same depth, to attempt to fix this I modified the depth map slightly:

Here's the final image. The effect isn't quite perfect, the trees in the foreground don't look quite right (a lot more fiddling with the depth map would have been required), but it was enough to fool a lot of people.

The tilt-shift lens is a classic way to do this. Simply tilt the focus plane to get the desired effect.

There are cameras and software which emulate this by a 'Miniature Effect' function.

AFAIK, this is pretty much achieved by making a gradually decreasing blur from the top-edge and bottom-edge of the photo, leaving a small portion in the middle sharp.

Some photos are more suitable for this, particularly those where you are shooting at an angle down on something. It makes it look like a miniature model being looked upon.

I wasn't sure if it was genuine tilt-shift or post processing - although one of the tags on the album does say "manipulation". Anyway I dug down into the albums comments and found these quotes from the artist, Noa Emberson:

Page 6: AJ, the effect was applied in photoshop just as you thought, using a lens blur and a quick mask. The trick is having the right shot to begin with.

Page 13: Thanks abgc. These shots were NOT taken with a shift lense. All was done in photoshop. Hope that doesn't ruin the magic for you too much. Haha. While we're on the subject, santa and the easter bunny don't exist as well...I'm sorry.

I'm still amazed at the pics though. On the other hand I am planning to rent a tilt shift lens to shoot some interesting buildings around where I live. So now I'll have to add trying to shoot miniatures as well :-)

You could also take a short cut and get help from http://tiltshiftmaker.com.

Hopefully Matt Grum will accept my use of his picture. Thank you :-) 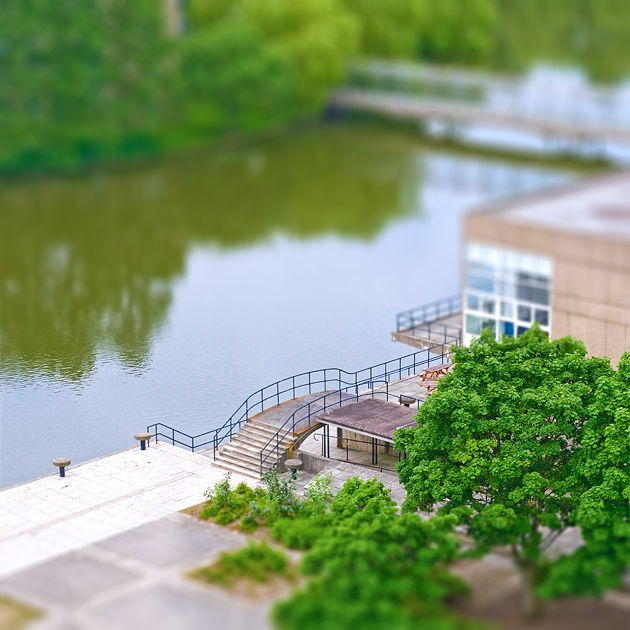 Update in 2019: Tilt adapters for crop DSLM cameras are available for around 25 to 50 quid, and a good M42 prime to put on it can be had used for around the same amount. While that is still special equipment, it is rather inexpensive special equipment.

Not the answer you're looking for? Browse other questions tagged post-processing photoshop tilt-shift or ask your own question.

13
How do I achieve this post-process effect?
4
Can this cheap tilt-shift compact camera produce good results?
4
Why does this shot appear to have the miniature "tilt-shift" effect?
21
How to I get the Instagram "Lux" effect without using Instagram?