How do I fasten a Nikon D90 to a tripod head with camera alignment pin?

A few years ago I got my first DSLR (a Canon EOS 350D), as well as my first tripod. Now I changed my camera to Nikon D90, but kept the tripod. When I first tried to mount my new camera on the old tripod, I got confused — there was no fixation hole on the camera's bottom as the tripod head would presume. Without that, there is nothing to make the camera stay at fixed position at all angles of z-axis (x being left-right, y being up-down, z being forward-backward). Here are the pictures to help you out: 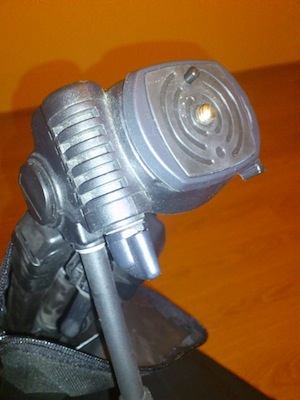 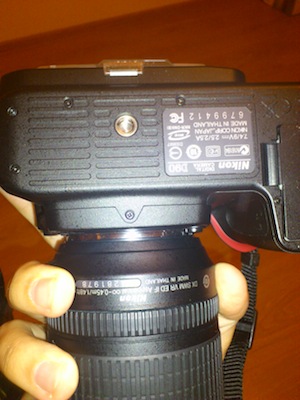 Do I need to get a separate head for my tripod to accommodate my new D90? If not, how would camera stay in its position when the tripod is configured to take vertical or portrait photos?

That pin normally engages into a hole in a quick-release clamp base (and I can't recall ever owning a camera that had a hole for a registration pin, though I've owned a lot of cameras). The clamping force of the screw, combined with the surface area of the contact between the camera and the tripod head, should be more than enough to secure the camera.

You should be able to obtain a quick-release set (clamp and plate) for relatively low cost if you want a QR, but don't get a cheap plastic set. Alternatively, you can probably drive or press the pin out of the head, leaving a flat plate. You would probably want to add some sort of cushion to prevent marring of the camera -- one of those thin rubber sheets they sell as a jar opener would do the trick.

Can you press the pin in (does it sit on a spring)? If so, then this seems pretty normal to me. Like @Stan, I don't remember having a camera body with such a hole. I don't have it with me now, but IIRC there is non on the Rebel XT (350D) as well.

According to the picture, it seems like what you have there is a QR plate on your tripod. Just disengage it, use the screw to secure the plate to the camera (forget about that pin) and attach it back to the tripod.

2
Which tripod plates are compatible with the Nikon D7000?
-1
What is the purpose of the second bump on the plate of this tripod?

3
Why doesn't my tripod ball head fit properly on the legs any more?
1
How do I select a good mid-range tripod for my Nikon D90?
0
Where can I get the tripod-to-camera adapter for my Nikon D90?
2
Issue with unscrewing tripod head
0
Will any of these actions damage a tripod?
2
Different screw/screw hole size on tripod/tripod head
0
Will a 1/4 20 nut fit a tripod plate with a 1/4 20 bolt?
2
How can I mount an action camera to a tripod when both have "out" tripod screws?
3
Separate tripod head mount type