What is “pixel density”?

Apparently megapixels aren't a good way to measure the camera quality, so some people are referring to a relative measuring system called "pixel density".

What specifically is this? What information it gives? The higher the number the better? Or vice versa?

Pixel density is simply a measure of how many pixels will fit into a given area. It is determined by the size of the pixels: the smaller the pixels, the higher the pixel density.

Imagine making two mosaics of tiles on your wall: one uses small tiles, the other uses large tiles. They might end up looking something like this: 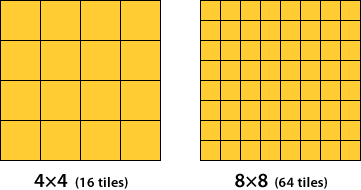 We can easily see the following:

Now imagine what we're really looking at is a highly-magnified view of two digital cameras' sensors. The "tiles" are the sensors' pixels (or light cells); it's clear that the sensor on the right has a higher pixel density than the one on the left. If we scale things up and imagine that the grid on the left is one tiny part of a 1 megapixel sensor (i.e. 1 million pixels), then assuming its sensor is the same physical size, the camera on the right will have a 4 megapixel sensor.

Now, we all know that more megapixels = better, right? :)

In fact, you hit on it in your question: megapixels measure image size but aren't always a good way to measure image quality. This is because smaller light cells tend to pick up more noise, especially in low light conditions. Camera manufacturers are continually finding better ways of combating this, but at the same time they're cramming more and more pixels onto the same-sized sensors. Very roughly speaking, higher pixel density tends to lead to more noise.

So to answer the last part of your question, higher pixel density doesn't mean better or worse per se. Increasing the pixel density of a sensor increases its resolution (more megapixels), which can be a good thing, but also usually increases its susceptibility to noise, which can be a bad thing. Buying any digital camera means weighing up those two factors and deciding on a compromise between the two that suits you best.

Pixel density in 2D sensors (*), like any other density, is the number of pixels per unit area. A sensor size is given (usually in mm or inch) and thus its area. A given sensor is divided to separate light sensitive locations, which are the sensor elements, or photosites/sensels. In the most common arrangement, these sensels are square in shape and form a linear, uniform grid (**).

Further discussion on the effect of density on quality can be found here.

(*) linear sensors, like in line scanners, can have sensels arranged in a single line and thus the density is the number of pixels per unit length.

(**) Other sensels arrangements exist, notably Fugi's SuperCCD sensors where the sensels are not placed in a regular matrix, but as a diagonal stack. Nevertheless, the arithmetic for pixel density still applies here.

Not the answer you're looking for? Browse other questions tagged terminology sensor pixels or ask your own question.

24
Why are larger sensors better at low light?
4
What is the difference between pixel pitch and pixel density?

9
Is it possible to scale up an image to increase the the pixel density?
47
Do megapixels matter with modern sensor technology?
4
What is a Dual pixel autofocus?
4
What is this dead pixel problem really called?
1
Can exposure parameters be kept high even at high ISO sensitivity, to keep image quality up?
0
Pixel size at long distance
7
Can using a high resolution sensor and downsampling compensate for a soft lens?
0
What is the meaning of pixel size for sensors