What kind of lighting equipment should I have as a Strobist beginner?

What kind of lighting equipment should I have as a beginner?

Basically I want to take some great portrait pictures with a decent lighting equipment.

Any suggestion towards strobist accessories?

Well if you're really trying to roll Strobist-style then, the minimal basics are:

There's a unofficial, but semi-endorsed basic kit here at mpex.com

How much you want to spend largely depends on exactly what to buy there. You can spend 30 dollars on a simple radio, or 300+ on TTL style radios. You can buy a simple, off brand, all manual flash for 60, or a professional grade flash for 500+.

After those basic items, you start talking about different light modifiers, more flashes, sturdier equipment, and most importantly...practice.

Since you are saying "strobist" then you are likely familiar with the blog/website for the bootcamp, guidelines, and commentary.

Here's the deep link for the basic kit that they say you'd do well to get for the starting shots: http://strobist.blogspot.com/2006/05/round-up-starving-student-off-camera.html

For my purposes, I started with some off camera triggers (optical triggers are fine, too), two flashes, two stands, one umbrella, and some gels. The rest of the diffusers, reflectors, and snoots/grids came from cobbled together bits from around the house.

Great portrait pictures where? In a studio, on a beach, in a park?

Many people think that speedlights will be a less expensive alternative to strobes but when you have all the gadgets and gizmos, a good speedlight combined with remote triggers and mods can be nearly as expensive.

Your choice of gear will be governed by budget and portability requirements. Because you said portraits, I would suggest a softbox instead of an umbrella. Although, debatably, a shoot-through umbrella functions much the same as a softbox, you can see by examining the catch-lights in the eyes of most really successful portraits that a softbox or octabank was used.

You'll want fill, so you probably need a reflector (silver or white) at a minimum, or a second light. If you want to get great hair, then a third light. It gets complicated fast.

Because I don't have to drag my lighting around too much, I have three categories of light:

Add to that white cards, reflectors, light stands, booms, and other stuff that makes lighting look natural and again, it gets complicated fast.

Which rig I pick depends on how badly I want the shot and where it's going to be. I can pretty much hand-hold the speedlights, or set them up on a spare tripod. In any case, not a big deal, but way less power on a sunny day. I've seen spectacular results from these, but I have to be careful not to try for something more than they can power.

If I'm doing a serious portrait where I can really set up and (important!!!) I will be in a location that doesn't get all weird about photographers and lights, then I will use the battery powered studio lights and softboxes. The results are just more consistent and the ability to compensate for disadvantageous lighting conditions like high noon or shooting into a sunset outweigh the hassle of carrying a few extra things.

In the studio, the big (600WS) lights are great because they are so consistent, recycle almost instantly, and are a joy to work with.

I mention all the complexity of lighting that is not strobist-related because there is a point where a speedlight is simply not the right tool for the job. Even though you can use a speedlight, that doesn't mean you should, all other things being equal.

If you are looking for the lowest cost barrier to entry, then obviously the strobist setup @rfusca mentioned is the right way to go. I'm a Canon shooter but I gotta say, Nikon really beats the Canon speedlights every which way. I also have a Mecablitz that really does a great job in a very manual kind of way.

Oh... one thing many people don't mention is a flash meter. Worth having.

There's only one change I'd like to make to rfusca's answer (which otherwise covers everything you need).

If you want to go really minimal, you should go with a wired off-camera flash trigger setup instead of the wireless/radio version. It's definitely cheaper. You can get this combo pack from MPEX for $38, which is less than even the cheapest of radio triggers. This will work with nearly every camera/flash combination; if your flash and/or camera happen to have other connection options (ie: PC jacks) then you can save even more.

However, then you're wired to your flash, and that's pretty inconvenient. If you were going to spend a bit more money than absolutely required, this would be one of the first places I'd look to upgrade.

You could also go with one of the proprietary wireless systems (which use infrared rather than radio but are still wireless) such as Nikon's CLS. If you use it manual-flash-power mode you'll still have all the benefits of the Strobist techniques while still being detached from your flash and not breaking the bank. If you go this route though, you're pretty much married to one vendor for both cameras and flashes. It's definitely worth considering a more flexible system based on radio triggers instead.

I began with a Yongnuo YN-560 manual speedlite ($80 online), a 40cm soft box and a fairly good stand. I triggered it wirelessly with the Yongnuo RF-602 transmitter and receiver.

This is cheap gear and it's not ideal but it does the job. I now have both an 83cm shoot-through umbrella and a 60cm silver/white reflective umbrella, another Yongnuo YN-560 and stand for the umbrella. I just ordered a Canon 430EX II for both a third speedlite but also for it's AF assist and E-TTL for other uses. I also bought a HONL gel kit to be able to inject some colour into my lighting.

This particular shot was done with the soft box to the front/right and a bare second flash behind the engineer. 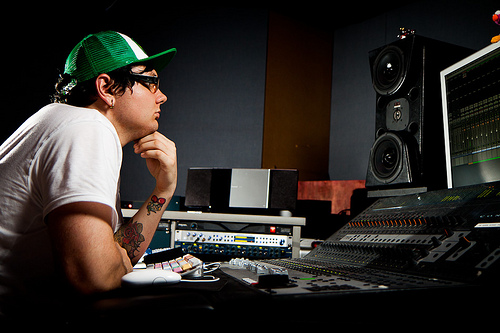 There's a load of stuff you can buy as a Strobist beginner and most of it you don't need.

You need:
- A flash with manual settings
- A trigger (be it cable or wireless, but the Yonguno RF-602s are brilliant and cost nothing)
- A stand

Umbrellas and softboxes and reflectors and grids and snoots are all really cool and really useful but start off with just the flash, learn how it creates light and how to use it to balance the ambient and then start adding bits on. It's much cheaper than buying a full Strobist kit to start with and you'll end up with really solid knowledge of how every aspect of your light works.

Not the answer you're looking for? Browse other questions tagged equipment-recommendation flash strobist or ask your own question.