Advice on composition and editing of the following picture [closed]

Ask Question
Asked 9 years, 8 months ago
Active 9 years, 1 month ago
Viewed 299 times
1
As it currently stands, this question is not a good fit for our Q&A format. We expect answers to be supported by facts, references, or expertise, but this question will likely solicit debate, arguments, polling, or extended discussion. If you feel that this question can be improved and possibly reopened, visit the help center for guidance.
Closed 9 years ago.

I'm new to photography (as in I just borrowed my first DSLR 2 days ago), I'm in the "read something new and go apply it in the field" phase.

Yesterday walking home from work, I saw an interesting scene where two trucks were parked behind each other all beat up and rusty. The rear truck interestingly had good tires with the brand "good year". I thought, it'll be a neat idea to take the photo and edit it later at home to showcase a positive message about how it's ok to have a beat up body as long as the foundation or the peers are in good shape.

As suggested by books I used the rule of thirds, so I tried to line up the word "good year" with the right axis, and the hitch from the car with the left axis. I tried to divide the view so half the ground wall are shown.

the original pic, taken with: 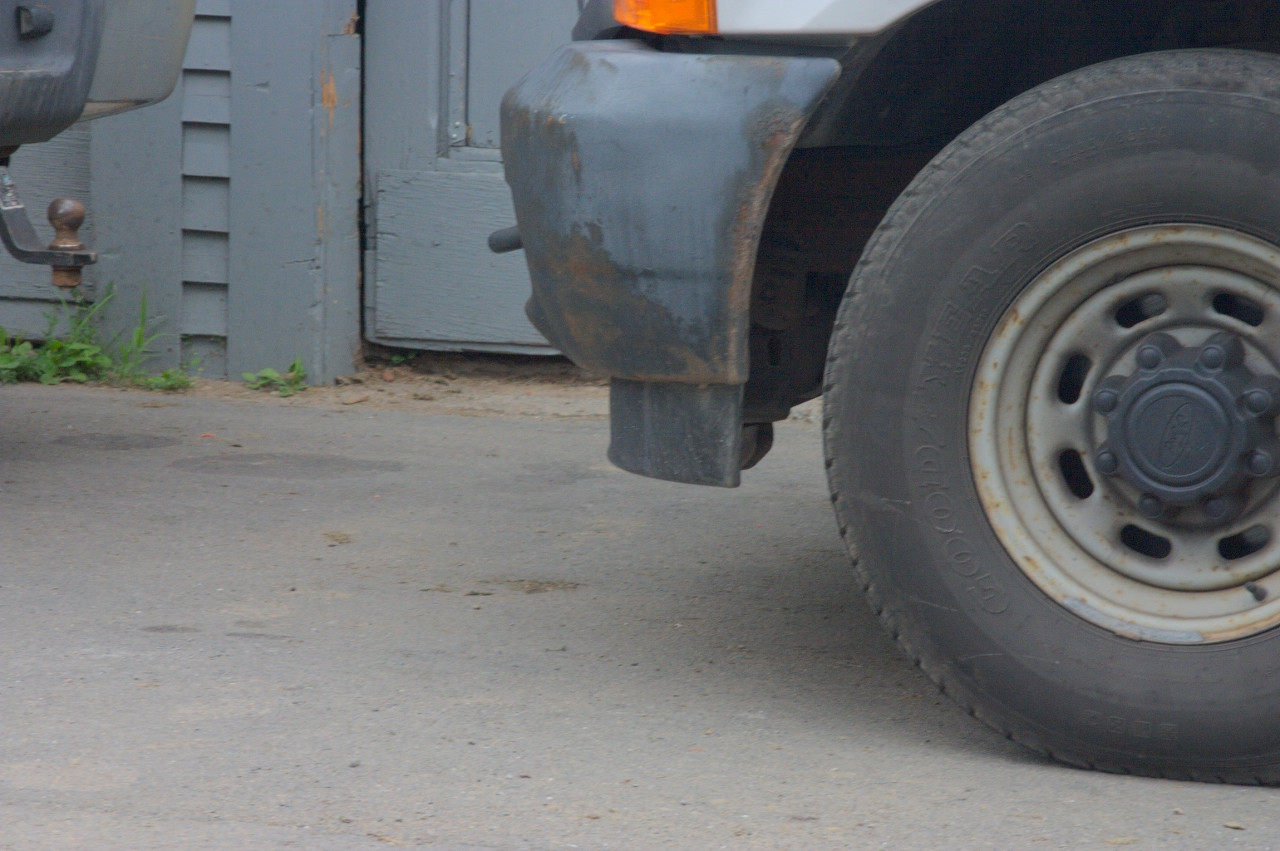 One of the books/articles I read, suggested to put contracts to the maximum as well as saturation for maximum dramatic effect, so i decided to try it on this picture.

I used iPhoto, RawTherapee and Gimp for this image. 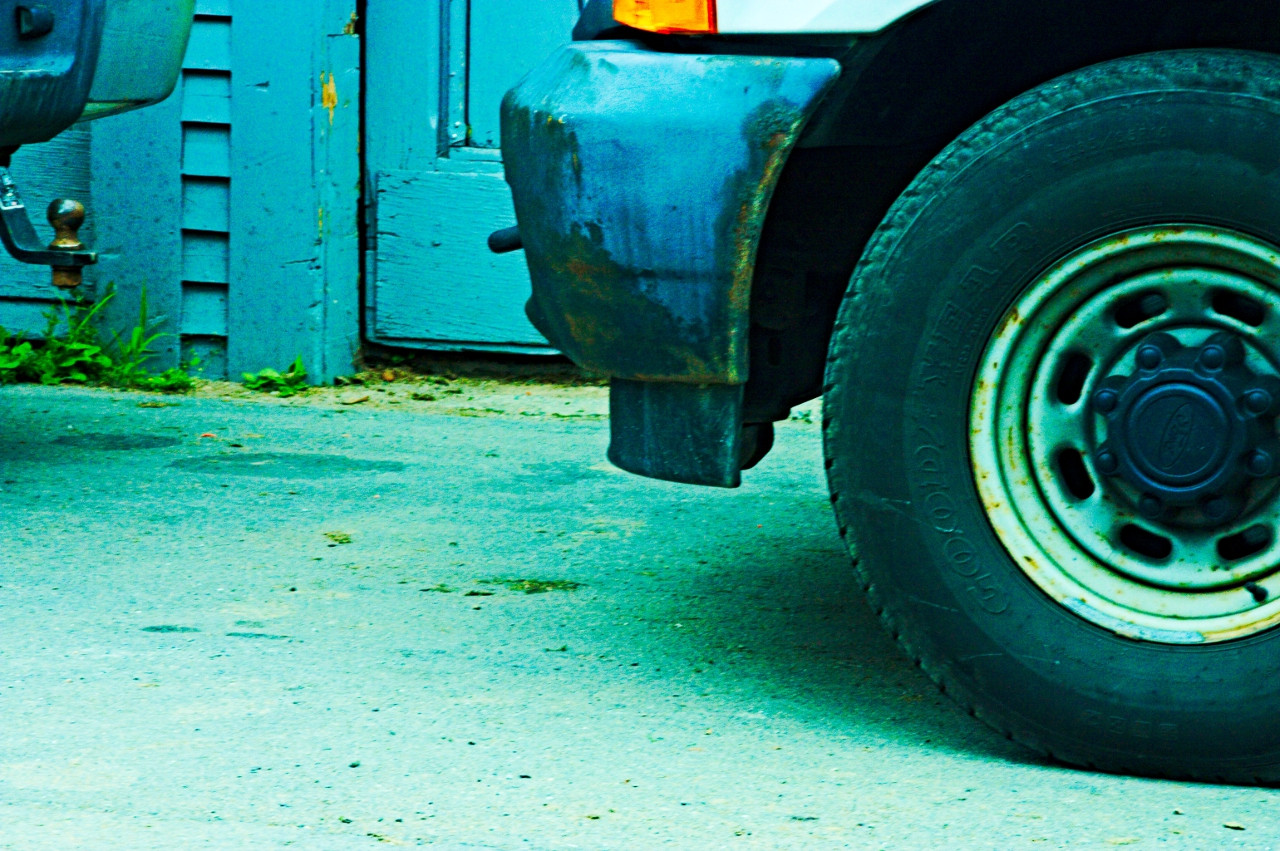 The book that you read, that told you to put contrast and saturation to the maximum for dramatic effect should be thrown out and or burned.

For the composition, if you wanted us to know that the car in front was an important part of the image, I would have taken a few steps back to your right when taking the shot, to get more of an angle of both cars.

It sounds like the important pieces of the image are the car bodies, and the tires. If that is the case I would try a larger aperture(smaller number on the camera) to put the background out of focus, and remove it as a distraction.

Props for putting an image up online for critique so early in your photography career! That takes bravery!

Your want and idea of using the rule of thirds is a good one, but sadly it's not as easy as putting the thing you want to be the focus on one of the intersections. I'm a complete novice so take any suggestions and critique with a pinch of salt.

With the rule of thirds the idea is to have the thing you want emphasised/the focus in the more 'interesting' part of the photo, but it needs to be able to stand out from the rest of the photo. Backgrounds often distract from the subject matter because they are too 'busy', so people use shallow depth of field with a larger aperture to help isolate their subject. eg in a portrait the person will be in focus, and the background not, and then their head or eyes will be placed on the rule of thirds intersection to make it more 'interesting' to the eye.

In the photo you have taken, there is not a lot of colour or contrast difference between the trucks and their background so they don't immediately stand out in the picture, so the subject isn't clear. This could be helped out by a shallower depth of field, or by changing the way you choose to compose the shot. The 'goodyear' in the picture is too small an indistinct to be noticed as the focus, so placing it on the rule of thirds won't make it stand out. If you want it as the focus you would probably have to get in closer and make it more prominent in the picture.

It may be a good idea to use the rule in a different way, and back up a little, putting the trucks more symmetrically on either side of the picture, and lining up some line between the two on an 'horizon line' a third of the way up or down in the picture eg the line between bumpers or wheel arches.

All in all it's a very subjective question, but in my opinion the idea is to make it so something in your picture stands out but not having things to crowded or 'busy' in the photo (obviously depending on subject matter). Whilst upping the contrast a little (all the way is mostly always overkill) usually helps bring out emphasis and detail in your picture, you first need to have composed that emphasis in shot.

I don't know if this answer will help in the slightest :D

Not the answer you're looking for? Browse other questions tagged photo-editing composition or ask your own question.

22
What are the first few steps a beginner should take in post processing?