What technique and camera settings should I use to capture lightning strikes?

I enjoy getting images of different types of weather and would really like to capture some good lightning shots. I have a feeling that I should be stopping down a bit and taking somewhat long exposures, but it's all just a guess. I saw a question regarding lightning color, but I'm looking for a little more general information.

What settings would you recommend for lightning photography?

Here is how I usually approach the subject:

I attach a remote cable release to the camera and set the camera to manual mode, and make a first guess on exposure (for instance 15 sec, f/11, ISO 100 or 200). Then I shoot a test frame and check the resulting image. I aim to make an exposure where the landscape looks like I want it to look in the lightning image. The lightning itself shines for such a short period of time that it actually does not illuminate the landscape very much in relation to the long exposure. Once I have settled for an exposure, I press the release button on the remote, and lock it. With the camera in continuous mode, this will capture frame after frame with very little waiting time in between. Now I just leave the camera there and hope :)

The image below was captured this way. It is taken around midnight in late summer in Sweden (which means that it was not pitch black, but quite dark). Exposure was 30 seconds on f/10, ISO 200. 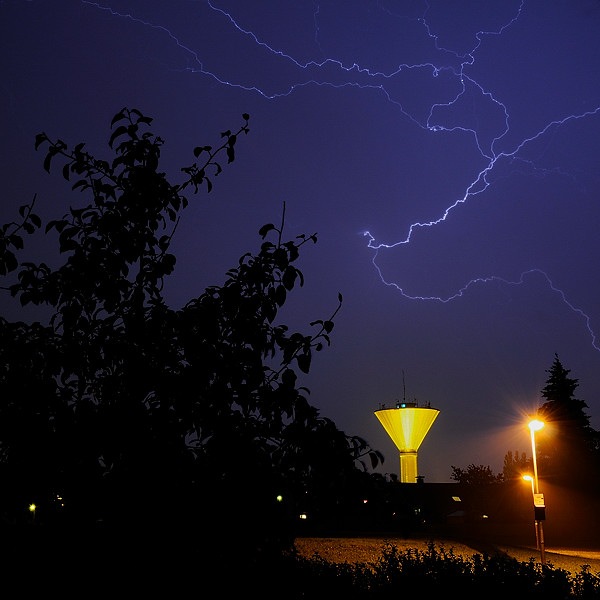 It is pretty similar to photographing fireworks (if it is relatively dark out or you have tons of ND filters):

Use a tripod. Set aperture and ISO exposure for daylight. Use bulb mode, open the shuter and wait for a lightning flash, then close the shutter (a remote is useful).

Use RAW, it it will give you a lot of headroom in case you want to increase exposure in the shadows (buildlings, etc). It will be very similar to increasing ISO.

Or you can get a lightning trigger (if you have a Canon P&S, I believe CHDK has something similar).

Stable tripod, stop down your aperture, lower ISO, use ND filters if needed, switch off "long exposure noise reduction" otherwise you send half of the time exposing dark frames. Disable automatics that are too smart or keep the time between shots long.

The main concept when photographing such unpredictable things is to keep the shutter open as much of the time you can and keep time between shots minimal. You probably want the shutter speed to be around 10-30 seconds as anything less than 10 seconds means too much time between shots and anything more means switching to bulb mode, guess-based metering and more fiddling with settings (so you spend less time exposing and have less probability of getting the shot). Take a sequence of shots and hope for the best.

If a Canon P&S camera, you can install CHDK and install one of the scripts to trigger the shutter when the lightning goes. (Since P&S have an electronic shutter, the sensor can be activated without taking a picture. The script does this and watches for a changed image, then captures a photo when it detects lightning.) Believe it or not, it's fast enough to do that.

To answer some questions about how CHDK does its thing: After CHDK has been installed and is running on a CHDK-capable camera, then a script is loaded from your SD card (in the scripts folder on the card) to make use of the motion-detection feature of CHDK programming. This lightning script was optimized for fastest response times.

If you look at the camera features chart at the CHDK Wiki You'll see that many of the Powershot cameras have motion-detection response times in the 30-100ms range. A lighting strike consists of several well-defined events. First there is the stepped-leader strike. This is the first faint strike that ionizes the air to allow it to conduct the main strike. If it is bright enough, this will be detected by a camera running CHDK with a motion-detection script, then 30-100ms later the shutter will open (response time being camera model dependent).

If you look at the chart on this page of the timing of a lightning events, there are many cloud-to-ground and ground-to-cloud strikes during one lightning strike as it quickly oscillates (like any capacitor discharges). If CHDK can trigger on the 1st or 2nd event, then you have a good chance of capturing all the rest. In most cases, it will capture the 2nd return strike at 62ms (for those models of cameras with response-times faster than that).

The interesting aspect of using CHDK is that for the first time in history you can now take hand-held photos of lightning strikes. You no longer have to leave the shutter open for many seconds while it is mounted on a tripod, all the while hoping that a strike happens during that time. If you set your Lightning Script parameters correctly to account for ambient light levels so it only triggers on anything brighter, then it will automatically trigger the shutter for you only when there's a strike. If mounted on a tripod or just held securely braced against something, it will ONLY trigger whenever there's a lightning strike, resulting in EVERY frame having a lightning bolt captured on it. The biggest drawback to doing lightning-photography this way is sorting through so many captures to pick out the best ones (been there, did that).

More information is available in the CHDK Wiki — follow the section on Lightning Photography...

If you've got an itch to DIY, you can also use an arduino with a photo transistor to detect the rapid change in light and trigger the shutter.

You can check out some details here.

If you camera has a low enough shutter response time, its doable.

Not the answer you're looking for? Browse other questions tagged technique weather lightning or ask your own question.

2
How to picture thunder when storm is coming
1
Best settings to capture lightning on a D3100?
32
What is the best technique for long-exposure photography in good light?
18
Photographing Lightning Strikes: White Balance
5
What kind of equipment or other technology is necessary to photograph "sprites" (the atmospheric phenomenon)?
0
How can I lock the aperture setting on a 5DMkIII with long exposures in Av mode?

13
What exposure mode and techniques should I use when out-and-about?
39
What methods do macro photographers use to get so close to butterflies, bees, insects and the like?
8
What technique and settings should I use to capture meteor showers?
15
What kind of gloves to use for operating a camera in freezing temperatures?
0
What technique can I use to focus on walking subject when in motion?
1
What is "Photo Chromography" and when would it have been in use?
2
What technique did Scott Mutter use in his famous photomontage "Untitled (Library)", and what meaning does that approach help convey?